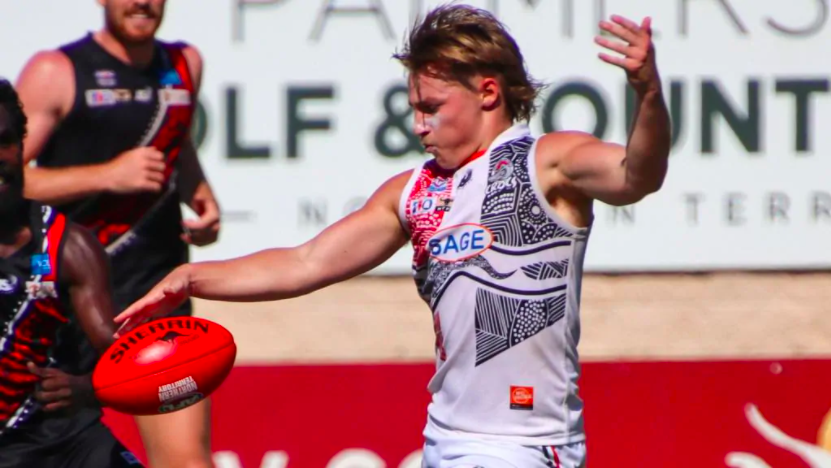 THE NTFL Men’s Premier League finals frontrunners will look to continue ticking over their win columns, with three of the top five sides set to take on teams on the outer. Meanwhile, Darwin and Waratah lock horns in the closest clash on ladder position, rounding out a full Saturday of action and the TIO Stadium triple-header. All that, and more in our weekend preview.

Tiwi and St Mary’s are set to meet for the second time this season when they do battle at TIO Stadium on Saturday afternoon. The Saints notched their first win for the campaign back in Round 3 against the Bombers, trumping their rivals by 51 points at the same venue. Since, they have improved to 4-3 and climbed into finals contention, while Tiwi remains winless after seven games despite showing glimpses of form. Saints spearhead Jackson Paine looks like missing this clash, leaving Jackson Calder to headline the forward 50. The Bombers should have plenty of firepower with Ross Tungatalum and Austin Wonaeamirri named on the same attacking line, while the likes of Nathan Scagliarini and Harley Puruntatameri are no stranger to the goals. In midfield, Nate Paredes and Shaun Edwards will have their hands full with Tiwi’s Fletcher Carroll and Adam Tipungwuti, while Mason De Wit will be the Bombers’ defensive driver, much like Dylan Landt for the Saints.

Wanderers’ push for top spot continues as the Muk Muks take on Palmerston at TIO Stadium on Saturday evening. The 6-1 Eagles have proven one of the competition’s most improved sides over the first seven rounds, and have the wood over Palmerston having won by 48 points in their Round 4 clash. For all the Magpies’ promise, they currently languish in seventh with just one win on the board, coming against bottom-placed Tiwi. But some positive news for Palmerston sees Eric Guthrie free to play after an appearance at the tribunal, which he escaped with a reprimand. Aaron and Alwyn Davey are also poised to take the field, while Sandy Brock‘s return to the backline will be a welcome one. Wanderers is flying and boasts a settled lineup, but will be missing Warwick Williams for this clash. Still, Brodie Newman has held up the defence superbly, while Brett Eddy and Simon Bates run riot up forward and Beau O’Connell hits his straps. Their attacking threat and midfield strength should again prove too much for Palmerston.

Nightcliff will hope to maintain its business as usual approach on Saturday night as it hosts Southern Districts under lights. This will be the first meeting between the two sides this season, with the reigning premiers looking strong as ever and Districts slowly climbing the ranks. While the Tigers have laid waste to most adversaries, the Crocs have been ultra-competitive across the season thus far and could have gained a positive record if not for some tight losses. Round 7 Rising Star nominee Jay Dahlhaus has been one of many Crocs to find form, combining well with the likes of Andrew Boseley and Luke Kiel in the attacking half with service from the reliable James Tsitas and Dean Staunton. Nightcliff has its own forward firepower though, with Liam Holt-Fitz fresh off an electric return and looking to have more of the same impact alongside fellow dynamic goalkickers Kyle Emery and Trent Melville. Dom Brew also faces a big task in midfield, with his defensive pressure key to blanketing the run of Tsitas and Nikolaus Rokahr.

Darwin and Waratah will look to end Round 8 on a high as they provide the weekend’s sole top five clash at TIO Stadium on Saturday night. The Buffs’ early-season form saw them soar to top spot, though they have faltered a touch of late with their two losses coming in the last three weeks – albeit against top two sides. Similarly, three of Waratah’s four losses have come in the last month of action, with one dealt at the hands of Darwin by six points in Round 4. Double Blues midfielder Jalen Clarke looks set to return to the fold, joining the in-form Jarrod Stokes in midfield. Brodie Foster is a glaring absentee from the team list though, perhaps forcing Mihail Lochowiak to shift forward with Ryan Pendlebury covering the back six. Waratah should be up for a good fight, with the likes of Callum Searle and Dylan Collis providing good value this season, while Brodie Carroll has led from the front.