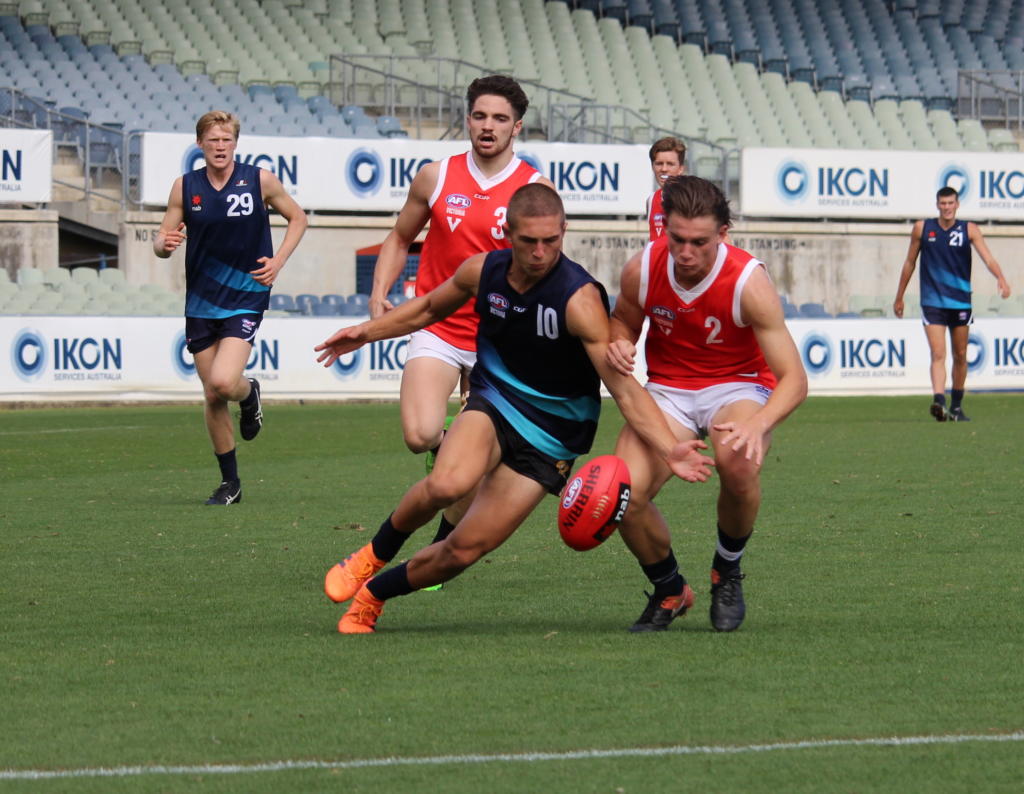 WITH this year’s AFL Draft less than a month away, the rumour mill has been in full swing as supporters turn their attention from trade period, to draft period. There is some early general consensus already, mostly pertaining to where prospects are ranked, but not necessarily where they may end up come draft time. In our November 2020 edition of AFL Draft Whispers, Draft Central takes a look at some of the key factors which may shape the top 10, as well as some of the queries pertaining to academy and father-son bids among the most compromised intake in history.

With pick one, Adelaide has selected…

Starting at the top, it is thought by many that the race for pick one honours has been narrowed down to two players. Given Adelaide boasts the first selection, local talent Riley Thilthorpe has been put forward as a safe choice, though Logan McDonald is marginally considered the better talent. Both are key forwards with senior state league experience this year who the Crows will be able to form their rebuild around. The ‘go home factor’ is a slight some Crows fans may have against McDonald, who is from Western Australia, though a local bias has hardly presented at the Crows previously and the 18-year-old seems to have no qualms about shifting interstate.

The other factor in this discussion is Jamarra Ugle-Hagan, the consensus best prospect in this year’s pool who is tied to the Western Bulldogs. Adelaide could keep the Dogs accountable by bidding with pick one, but may seek to market their ties to the top selection by simply taking a player they can actually access. Elijah Hollands is another in contention, a midfielder with plenty of x-factor who is coming off a long-term knee injury and actually supports the Crows.

It is well known that along with McDonald and Thilthorpe, three other top-end prospects have formed a breakaway group which clubs are jostling to gain access to. Aside from Ugle-Hagan, who will find his way to the Western Bulldogs regardless of where a bid is placed, Hollands, Will Phillips, and Denver Grainger-Barras are the players who join the two aforementioned key forwards in this exclusive group.

Hollands, who suffered a serious knee injury during preseason, was touted as a potential challenger to the number one spot, and looks likely to be North Melbourne’s favoured pick. He is a tall midfielder/forward with serious game-winning attributes which include athleticism and scoreboard impact. Sydney’s top five pick is likely to come down to one of Phillips or Grainger-Barras, with interest in an inside midfielder growing, rather than the taller options. That of course brings Phillips to the fore, a 180cm ball winner who cut his teeth alongside Matt Rowell and Noah Anderson in Oakleigh’s 2019 premiership side.

What will Gold Coast look for with pick five?

The Suns were one of the big improvers in 2020, thanks in no small part to their top-end draftees who managed to make an immediate impact at senior level. With pick five, they have the chance to bring in another talent who may do the same next year. It seems the Queensland-based outfit will look to prioritise another midfielder, and Phillips would be the obvious choice as arguably the best pure ball winner available. Though, with growing talk that he may already be taken by the time Gold Coast gets on the clock, Geelong Falcons product Tanner Bruhn could be their man. He was Vic Country’s Under 16 MVP in 2018 and despite repeat injury setbacks, has shown his class through midfield when fully fit. Gold Coast is also able to pre-list Academy member Alex Davies, a tall clearance winner, but may look towards balance in acquiring the hard-running, 183cm Bruhn.

Will Essendon trade into the top two?

Though the Bombers have done well to secure the services of Peter Wright at little cost, the key forward slot remains an area which depth is desperately needed. Essendon currently holds picks 7-9 and could become the first team since the expansion era to utilise three top 10 picks in one draft. It would make for a hell of a story, though Adrian Dodoro will inevitably look to squeeze even greater value out of that significant hand.

With a wealth of high-level talls available at the pointy end of the draft, the Bombers may look to package a combination of their current top 10 picks to move up the order and gain access to one of those elite key position forwards. For example, North Melbourne may be a team of interest as they are in need of as much fresh talent as possible. Thus, the Roos could send pick two to Essendon in exchange for two of those top 10’ers in order to maximise their hand. It will unlikely be that simple, but that kind of thinking is perhaps what Essendon will have to do to obtain the likes of McDonald or Thilthorpe, who could become pillar key forwards in future.

Plenty of talk has surrounded the proposed two-horse race pertaining Adelaide’s pick one (see above), but what happens to Thilthorpe should the Crows favour McDonald? Depending on the final order of the top 10, the South Australian may end up as this year’s slider despite being considered a top five or six talent. Essendon could be a potential suitor, though are said to have eyes on a certain other prospect in moving up the board, while the likes of North Melbourne, Sydney, and Gold Coast may look towards the midfielders available. Thus, Thilthorpe could slowly slip back to the Crows at pick nine, which would be a massive result for last year’s bottom side. A long shot, yes, but possible.

Will clubs take all of their Academy/father-son talents available?

In short, no. With cuts to list sizes, it just is not feasible for many clubs with rich academy cohorts to take every talent available to them this year. We saw with Brisbane in 2019 that if another club is interested in their homegrown products and the price is too high, they simply will not match the bid.

That may be the case for Brisbane once again, while Adelaide is another team of interest this year. The Crows have access to Tariek Newchurch and James Borlase through the NGA system, while Luke Edwards is a potential father-son choice. The latter is said to be weighing up whether to nominate for the open draft, and Adelaide’s current top-ended draft hand suggests it is only considering taking two of the three players.

Fremantle will look to secure NGA talents Joel Western and Brandon Walker. After the Dockers’ pick 12, they only have picks 32, 55, and a couple in triple figures to match any potential bids, so might get a little busy before their picks are locked in. Otherwise, they may prioritise one over the other. Collingwood is in a tricky spot too, with Reef McInnes attracting some added attention after his draft combine exploits. The bid will have to be fair on the Magpies’ end, and ideally after their current picks 14 and 16.