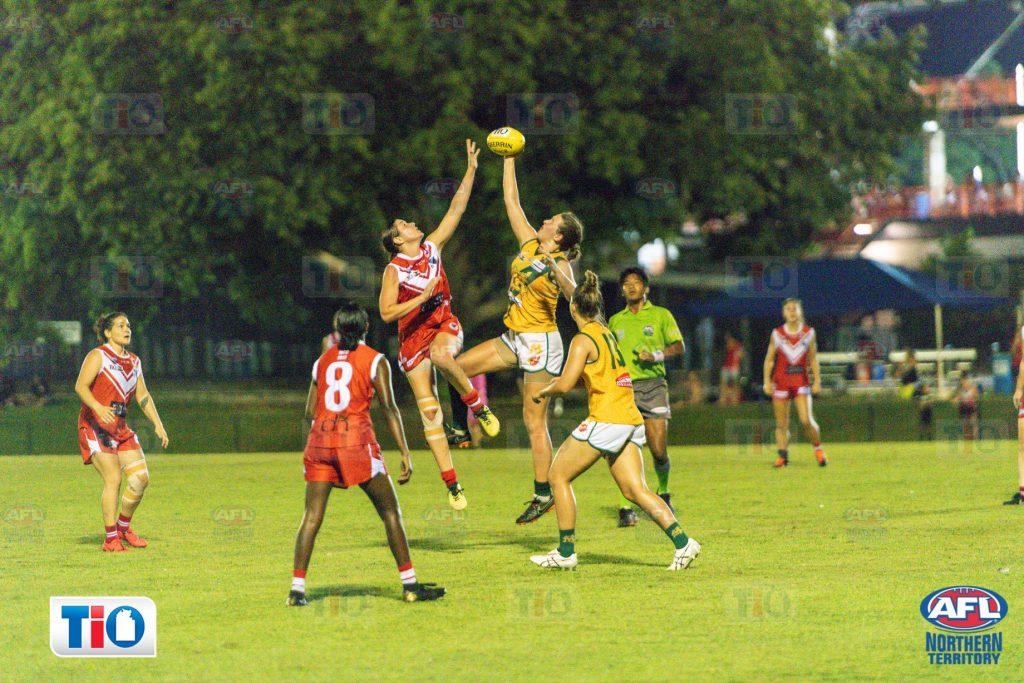 THERE was no shortage of close encounters throughout Round 7 of the NTFL Women’s Premier League with two of the games decided by less than 20 points. While the ladder leaders in Pint had the week off, second placed St Mary’s kept the heat on notching up their fifth win to remain in the hunt for that top spot. At the other end of the table, Tracy Village fell to their sixth straight loss.

A fast-starting Buffettes side was ultimately the difference between the two teams, as Darwin piled on four goals to one in the opening term and therefore managed to dictate the terms of the game for the remaining three quarters. Despite a strong last quarter performance from the Wanderers they simply could not peg back the margin enough to get over the line as the Buffettes walked away with their fifth win of the season. Darwin could have won by more had they been more accurate in front of the big sticks, notching up seven behinds, but overall will be pleased with their ability to halt the Wanderers in their tracks.

Zoe Anderson continued her stellar form in front of goal to make it three straight weeks where she has contributed to the scoreboard, posting two majors in this clash against the Wanderers. She was not the only multiple goalkicker in the side with Delsey Ah Wang bobbing up for two goals of her own while in her first game for the season Tayla Hart-Aluni also managed to slot one through the big sticks. Dominique Carbone was once again named in the bests for the Buffettes as was Molly Althouse for her second time in three weeks. Talia Corrie and Bianca Stokes also made their presence felt across the ground in their side’s win. For the Wanderers, Kaitlyn Armstrong once again found her range slotting a major while Shekeine De Satge and Kiarhii Williams also managed a goal apiece. Morgan Johnston was a constant threat across the ground and was recognised for her efforts, making her way into the bests for the third straight week as did Tishara Davern.

It is fair to say that it was all one-way traffic with Southern Districts handing Tracy Village a 137 point thumping. The Crocs had the ball on a string and came out with a real fire in the belly, not allowing Tracy Village any easy touches. The real damage was done in the second quarter where Southern Districts piled on eight unanswered goals as Tracy Village simply had no remedy to stop the avalanche of scoreboard pressure. it was not until the final quarter that the bottom of the ladder Razorbacks managed to register a mere point.

There is no denying that Tayla Thorn was the best afield with the Crocs forward putting on a show and walking away with a staggering 10 goal haul for her efforts inside 50. She was a constant firepower and showcased her impressive goal nous to take her season tally to 16. Emma Forsyth, Megan Craufurd and Grace Mulvahil all collected two goals each highlighting the number of goalscoring options the Crocs had. Michala Shaw and Indianna Hickling both stood up to be named in the bests joining the likes of Thorn, Forsyth and Craufurd.

It all came down to the final quarter of action with Nightcliff pulling away and showcasing their high level of endurance and footy smarts to come from behind at three quarter time and steal the win. The lead chopped and changed throughout the game testament to the intensity and closeness of the match however a three goal to one final quarter allowed the Tigers reign supreme. Inaccuracy plagued both sides but the Magpies will be ruing their sloppy start to the game, monopolising the play and scoreboard but just unable to capitalise on their chances.

Goal-scoring machine Arthurina Moreen was up to her usual tricks and while it was not enough to get her side over the line her two goals kept them in the hunt. Crystal Browne was the only other Magpies player to hit the scoreboard nailing two majors of her own. Tabitha May continued her dominant ways across the ground, named in the bests for her third consecutive week while Michaeline Brown and Jo Guthridge also slotted into the mix. For Nightcliff, Mickayla Ward proved to be handy inside 50 nailing two goals as first gamer Amy Pittman booted a major to kick off her season. Jacqueline Anyon-Smith returned to the goalkickers list this round while in terms of best performers, Andi Moliere, Emily Casey and Eliza Morrison were recognised for their performance.

In the final game of the round, St Mary’s flexed their muscles with a strong showing against Waratah to collect a 21-point victory and edge closer to the top of the table Pint. It was a fast start from St Mary’s that set the tone for the match and while accuracy was somewhat of a problem they still managed to get the job done and shut down Waratah’s every move, rendering them goalless until the final term. The second and third quarters proved to be a stalemate for both sides, unable to create any real fluidity however the Saints had all but set the game up.

Ashlea Melnikas was in hot form converting three goals to take her season total to eight while Claudia Whitfort was the only other goal scorer for the victors. Melnikas was also named in the bests credit to her output throughout the game as Danielle Ponter and Megan Williamson also made their third straight appearance in the bests. Eliza Shannon and Annabelle Shannon both plied their trade across the ground for the Saints. The only goal scorer for Waratah was Lisa Roberts who showcased her goal nous while the bests are yet to be released for the Tahs.