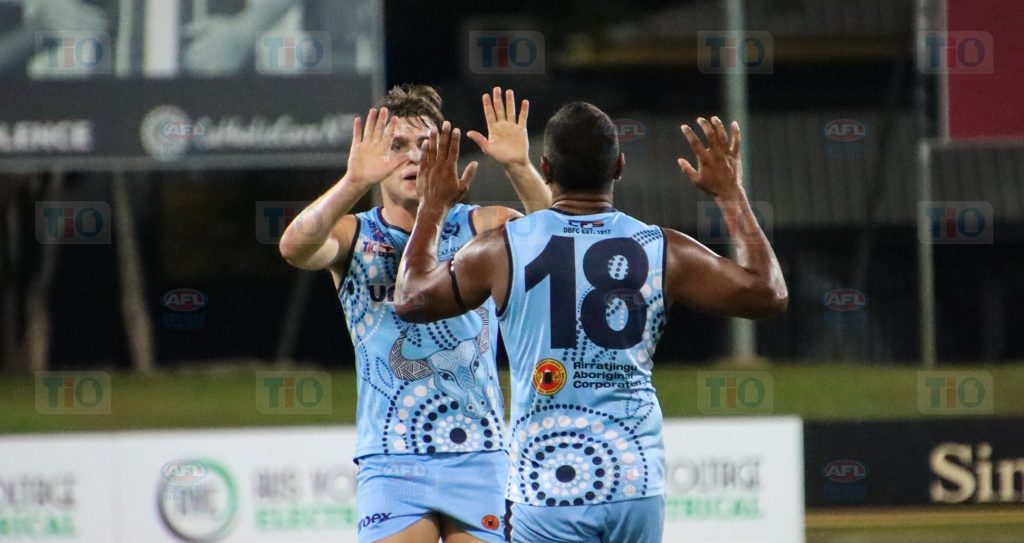 ROUND 7 of the Northern Territory Football League (NTFL) Men’s Premier League is headlined by a top-of-the-table clash between Darwin and Wanderers, two of the three sides tied with 5-1 records. The high-stakes bout will close the show on Saturday’s TIO Stadium triple-header, with the weekend’s only standalone game poising Palmerston against Nightcliff at Cazalys Arena. Find out which players are poised to make all the difference, and more in our weekend preview.

Tiwi’s search for a maiden win in season 2020/21 returns to TIO Stadium on Saturday afternoon, when the Bombers meet a Southern Districts side on the up. Both teams are showing signs of improvement after lacklustre early-season form, though the Crocs are a little further along having already notched a couple of wins. Two of those have come in their last three outings, including a 58-point drubbing of the Bombers in Round 4. That was one of Tiwi’s four losses of over 50 points in the first month of the season, though a bunch of big name recruits and returnees have seen the Bombers cut those margins over the last fortnight.

Former Geelong and Brisbane midfielder Allen Christensen remains in the Tiwi lineup after booting three goals on debut, set to line up in midfield alongside the in-form Fletcher Carroll. With Ashton Hams also in the side, the Bombers should have plenty of firepower in that department. The likes of Adam Tipungwuti and Adam Sambono should also aid their forward drive in the absence of Harley Puruntatameri. Southern Districts’ one-two punch of James Tsitas and Nikolaus Rokahr has worked wonders its engine room, with Andrew Boseley spearheading a potent attack. Meanwhile, Oakleigh Chargers graduate Lachlan Bugeja has been named in the side, joining fellow NAB Leaguers Jesse Clark and Jay Dahlhaus as the Crocs push for top five status.

An important top five clash takes place at TIO Stadium on Saturday evening as St Mary’s does battle with Waratah. The Saints looked to be turning their season around with three-consecutive wins, before they ran into Darwin last week and fell back to an even keel. Waratah boasts the same 3-3 record but sits a place higher that St Mary’s in fourth, having only narrowly gone down to premiership fancies Darwin and Nightcliff (twice). The Warriors’ win-loss trend sees them due for a win this time out, with a return to the winners list and the chance to keep touch with the top three up for grabs. It is the first time these two teams will meet this season, with plenty to play for either way.

Some handy inclusions look likely to spruce up both lineups, starting with Daly Andrews for St Mary’s. The 20-year-old Victorian is fresh off a fantastic season with South Adelaide at senior SANFL level and will slot straight into midfield alongside Nate Paredes. After managing just one goal last week, spearhead Jackson Paine will also be out to do some damage, while the likes of Jackson Calder and Nick Yarran may have to earn their way back into the side. Waratah will be buoyed by the return of Michael Newton up forward, set to form a formidable partnership with Jae McGrath. His inclusion sees Thomas Graham swing down back, adding to Waratah’s tall stocks across the ground. Tah’s midfield depth should also match up well against the Saints, making for a tight contest overall.

Nightcliff will look to string together three-consecutive wins for the second time this year when it travels to face Palmerston at Cazalys Arena on Saturday night. The fixture looms as Palmerston’s third home game in four weeks, though that factor has hardly proven advantageous of late given the Magpies have not won since Round 2 – against the winless Tiwi Bombers. Currently seventh at 1-5, the Magpies are running out of time to keep with the finals contenders, despite showing glimpses of form. It has largely been business as usual for the Tigers, boasting an equal-best 5-1 record having only slipped up against St Mary’s in Round 4. The reigning premiers will fancy their chances of keeping the heat on their main premiership rivals.

As if it needed any more firepower, Nightcliff’s forwardline is set for a boost with the inclusion of Liam Holt-Fitz, who is set to join Trent Melville and Kyle Emery in a dynamic front six. Cam Ilett also comes straight back into the lineup and will rotate through there, while Dom Brew looks to continue his dominance of the midfield. Palmerston will be buoyed by the return of Nigel Lockyer Jnr, with the enigmatic swingman likely to aid Daniel Stafford in attack. The midfield battle should be a good one, with Palmerston’s trio of Chris Williams, Eric Guthrie, and ruckman Matthew Dennis set to be tasked with plenty against Nightcliff’s formidable outfit. A good news story could also be the return of Jayden Kickett, who takes his place in Nightcliff’s extended squad, pending final selection.

Arguably the best Round 7 fixture will be left for last when Darwin and Wanderers lock horns in a blockbuster top-of-the-table clash. The game rounds out Saturday’s TIO Stadium triple-header, forming the perfect end to a super day of Premier League action. The Buffs have lead the competition most of the way thus far, going down only to Nightcliff as Wanderers remains the only side they are yet to compete against. The Muk Muks have been fit and firing in 2020/21, with their only loss also coming at the hands of Nightcliff and three-consecutive wins putting them in ideal form of late. With only percentage separating the two sides, this game looms as a crucial factor in the overall minor premiership race.

Matt Campbell is set to bring some experience back to Darwin’s lineup, looking to continue his great scoring form this season as he slots in at half-forward. He joins the likes of Brodie Foster and Ishmael Palmer in the front six, while Sturt recruit Mihail Lochowiak comes into the side up the other end. Meanwhile, star midfielder Jalen Clarke has been named on an extended bench. Braedon McLean is a very handy inclusion for Wanderers, set to feature at half-back alongside recent Rising Star nominee Brodie Newman. There is plenty of firepower up forward too, with leading goalkicker Brett Eddy combining well with Simon Bates, and Nichols Medallist Beau O’Connell of late.