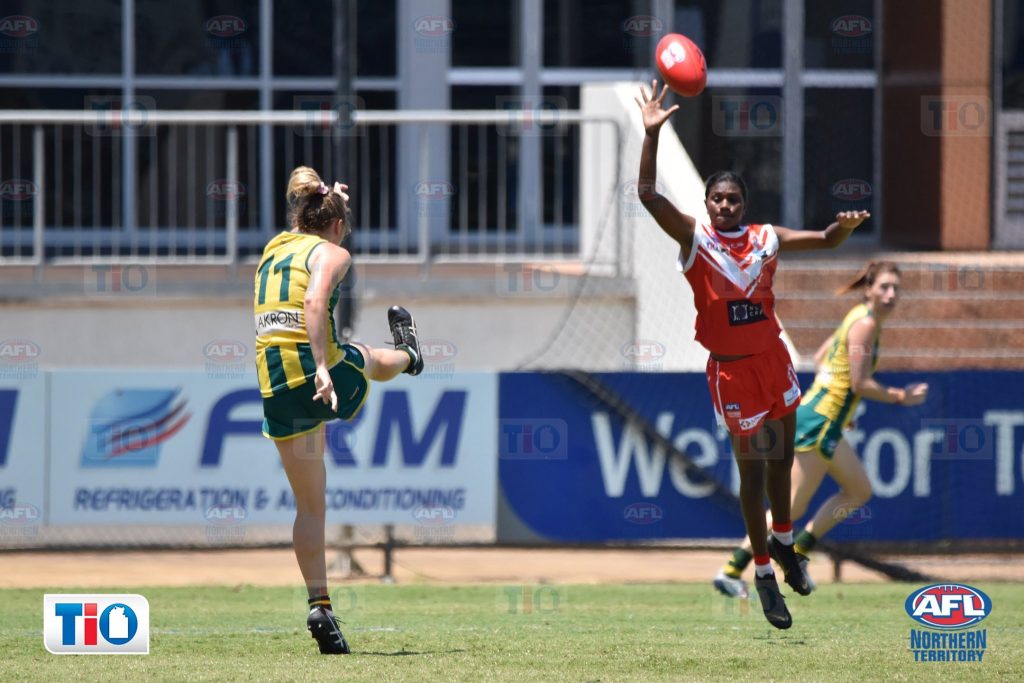 ANOTHER weekend of blowout margins headed up Round 6 of the NTFL Women’s Premier League, with three of the four winners conceding less than 10 points in their respective matches and little changing on the ladder with three of the top four collecting significant wins. While Nightcliff had an eye-opening encounter with Darwin Buffettes they still sit within the top four, and Southern Districts seem to have gotten into the swing of things now with a second straight win after four consecutive losses to start the season. All that, and more, in our weekly women’s wrap.

Darwin Buffettes have continued their excellent start to the season, limiting fourth-ranked Nightcliff to just one goal and overcoming a shaky start to come away with a 49-point margin. It was an explosive second and fourth quarter that saw the side really create a buffer against the Tigers, booting 3.2 in each quarter and backing it up around the ground with their defensive effort. For Nightcliff, it was a disappointing outcome especially given their great start to the season, meaning they will really have to lift their game to get back to their early season form with three straight losses on the board.

For Nightcliff, the side’s lone goalkicker Emma-Lou Wolsey remains atop the goalkicking leaderboard by the skin of her teeth, sitting equal first alongside Darwin’s Zoe Anderson who matched her with one goal of her own this week too. Mickayla Ward and Sophie Hatzismalis were both named best for the Tigers, while for the Buffs there were a flurry of gamemakers around the ground with Machaelia Roberts (three goals), Delsey Ah Wang (two goals), Lucy Louis and Jemma Iacono putting on solid performances.

It was another disappointing outing for Tracy Village this round, making for the side’s fifth straight loss and second time in two weeks that they were unable to put a score on the board. To the Saints’ credit though, they did not leave any stone unturned with a shot at rocketing their percentage this week sitting in second on the ladder, seeing 11 players hit the scoreboard and only two register multiple majors, such was their complete and utter dominance on the contest.

St Mary’s did not seem to put a single foot wrong throughout, navigating traffic with ease and seeing Danielle Ponter and Michaela Long enter the leading goalkicker list with four goals apiece. Both players were named among the best, as were Megan Williamson, Fatnowna Frances and Shailyn Doreen Peris who all put a goal on the board in the comprehensive victory.

Waratah narrowly escaped a goalless outcome when they took on Pint, booting a major in the third term to edge back the margin slightly, but seeing the Queen Ants reign supreme in a lower scoring affair than expected. While certainly not the outcome the Warriors wanted, Pint still sit atop the table undefeated so to come out and limit Pint’s firepower up forward is certainly a credit to the Waratah outfit. That being said, Pint was clinical once more in this effort with the work rate high and expectations higher a third of the way through the season.

For Waratah, the ever reliable Jenna Singh was the lone goalkicker, while Pint’s Jessie Baumer booted two to sit on six goals from three matches, and was joined by Gemma Cusack, Jacqueline Downey and Erin Lavis on the goalkicking list this round.

Southern Districts have inched their way up the ladder with a second straight win this week, downing the Palmerston Magpies and proving they are capable of much better performances than they have put out thus far in season 2020. It was a seesawing affair between the two sides, seeing both teams battle for the upper hand and finding a couple of purple patches to extend or reduce the margin, with the Districts’ three goal to nil second quarter allowing them to take the lead and hold onto it. While the Magpies had a better final quarter, booting 2.3 to Districts’ 1.0, it was unfortunately not enough after allowing the Crocs to get on top early in the high pressure outing.

For the winning side it was Tayla Thorn and Jessie Brock who led the charge out the front, booting two goal apiece, while young gun Grace Mulvahil and milestone 50-gamer Ebony Miller also found the big sticks. Malory Nankervis and Rhiannon Busch were named among the best in a solid and much better team effort from the Crocs. For the Magpies, Kiara White, Natasha Medbury and Jasmine Duturbure booted a goal apiece, with the former also named among the best alongside Tabitha May and Iesha Ronberg.