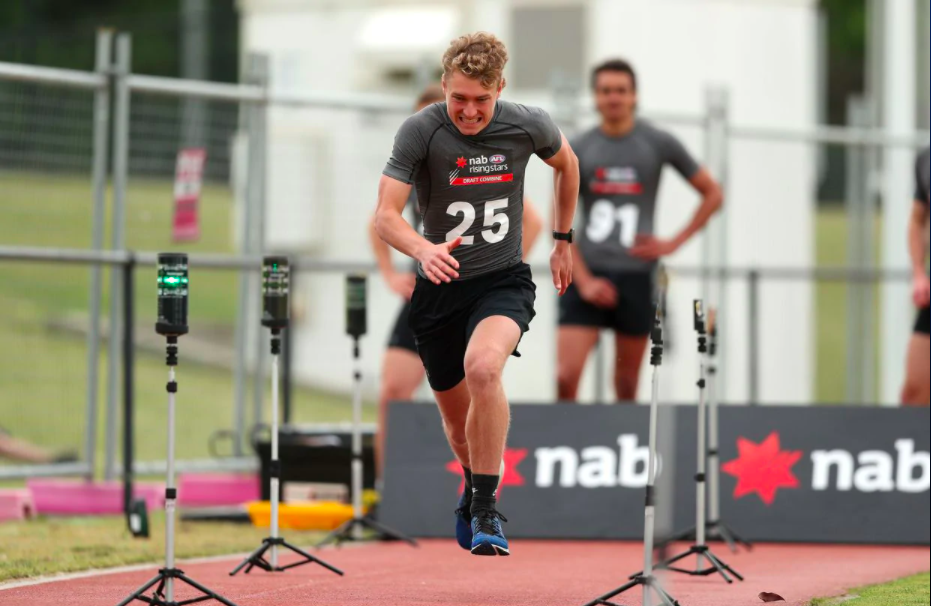 Having taken a look at the top 10 results from each test, we now look back at the combines as a whole to further put under the microscope those who performed well across the board. Needless to say, these athletes can certainly play too, with plenty of first round prospects scattered across the pointy end of each leaderboard. Furthermore, these are the players who have earned National Combine invites; meaning they have done so at the request of at least three-four AFL clubs, or by having previously earned passage into their respective academy hubs.

Among the top overall performers, three West Australians managed top 10 results across four different tests. Peel Thunder’s Isiah Winder is arguably the best draft prospect of the lot, a classy small midfielder who achieved top two results in the standing vertical jump and running vertical jump (right). To top it off, he also came fifth in the 20m sprint and sixth in the agility test. He uses all those traits on-field too, and looms as a potential second round pick. West Perth defender Kellen Johnson and Fremantle Next Generation Academy (NGA) member Chris Walker were the other two WA products to complete the feat, doing so in all three jumps and the agility test.

Godfrey Okerenyang, who took out the 2018 AFL Grand Final sprint and comes from a strong athletics background, was the only other player to manage top 10 results in four different tests. The GWS Academy hopeful leapt for the biggest standing vertical jump (84cm) and running vertical jump (right, 92cm), while also placing third in the 20m sprint. His podium finish in the running vertical jump (left) rounded out the four-peat. He looms as a more prospective pick at this year’s draft, having only recently committed to pursuing a footballing career.

Another two high-upside late chances who are already tied to clubs in Josh Eyre (Essendon, NGA) and Aiden Fyfe (Gold Coast, Academy) each racked up hat-tricks of top 10 features. Like most of the others, they were prominent in the jumping tests, while also respectively running the eight and ninth-best 20m times. In the most compromised draft crop ever, the likes of Reef McInnes (Collingwood NGA) took out first place in the speed test with a searing time of 2.78 seconds, while Sydney Academy member Braeden Campbell and Bulldogs NGA gun Jamarra Ugle-Hagan were also among that top 10 with equal times of 2.90 seconds. The latter two are expected to attract bids within the top 10.

There were plenty of other first round prospects to light up the track, too. WA key defenders Denver Grainger-Barras and Heath Chapman showed their wares in the agility and endurance departments respectively, while fellow sandgroper Jack Carroll was a standout jumper – even while sporting a cast on his broken wrist. Archie Perkins was another to impress in multiple categories, with Vic Metro hub teammates Finlay Macrae and Nikolas Cox acing the 2km time trial. Others to excel across the board included Nathan O’Driscoll, a second round candidate, and Brodie Lake, who hails from the Northern Territory but made the move to South Australia this year. He is eligible to be pre-listed by the Gold Coast Suns via their access to the Darwin zone.