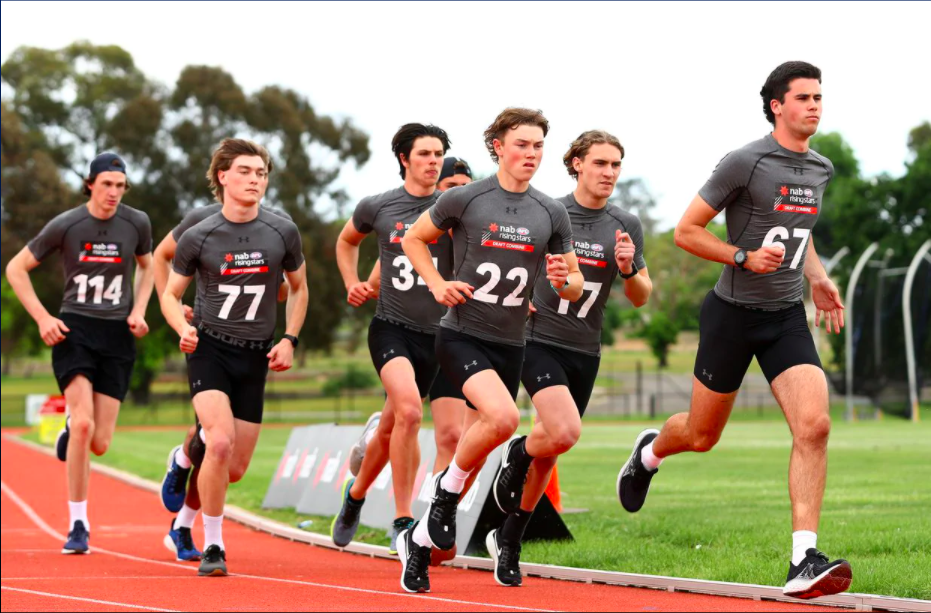 Having already looked at the 20-metre sprint times, agility test results, and vertical jumping tests, we finally shift our focus to the 2km time trial. This test is used to measure a player’s endurance, taking over from the yo-yo test conducted during preseason. The 2km distance is also a good barometer of athletes’ speed-endurance mix, providing a snippet of how they may fare in more manageable stints rather than a full 10-15km distance they may run in-game. Typically, times of under six minutes and 30 seconds are considered high-level.

For the second year running, the time trial record was broken by a Greater Western Victoria (GWV) Rebels product. Former steeplechaser Harry Sharp soundly beat Jay Rantall‘s 2019 effort of 5:50 over the 2km, notching a blistering time of 5:28 to standalone as the clear nationwide leader. A draft bolter of sorts, Sharp is a zippy outside midfielder/forward with plenty of upside. 194cm Sandringham Dragons forward Fraser Rosman is another in the same boat, and went close to Rantall’s record himself with an effort of 5:52, the only other time of under six minutes.

Northern Knights talls Liam Kolar and Nikolas Cox ran side-by-side to finish a second apart just over the six-minute mark, while Gippsland Power midfield pair Sam Berry and Ryan Angwin continued the two-by-two trend, albeit at different combines. Three players were tied for 10th spot at 6:23, including top 15 chance Archie Perkins. Fellow first round candidate Heath Chapman came in ninth just ahead of that three-man group, and impressive effort considering his status as a key position defender. He and Nathan O’Driscoll were the only non-Victorians to register top 10 times, and were the best runners out of Western Australia.

Obviously it is quite difficult to compare the 2km efforts with that of preseason yo-yo tests, which also serve to measure an athlete’s endurance. However, O’Driscoll again ranked equal-10th in the nationwide results for said test, notching a score of 21.8. Berry was also a standout during preseason, with his score of 21.7 good enough for equal-fourth among his Victorian peers. Both are tireless midfielders who translate this data to their on-field efforts, boding well for a swift adjustment to the rigours of AFL football.