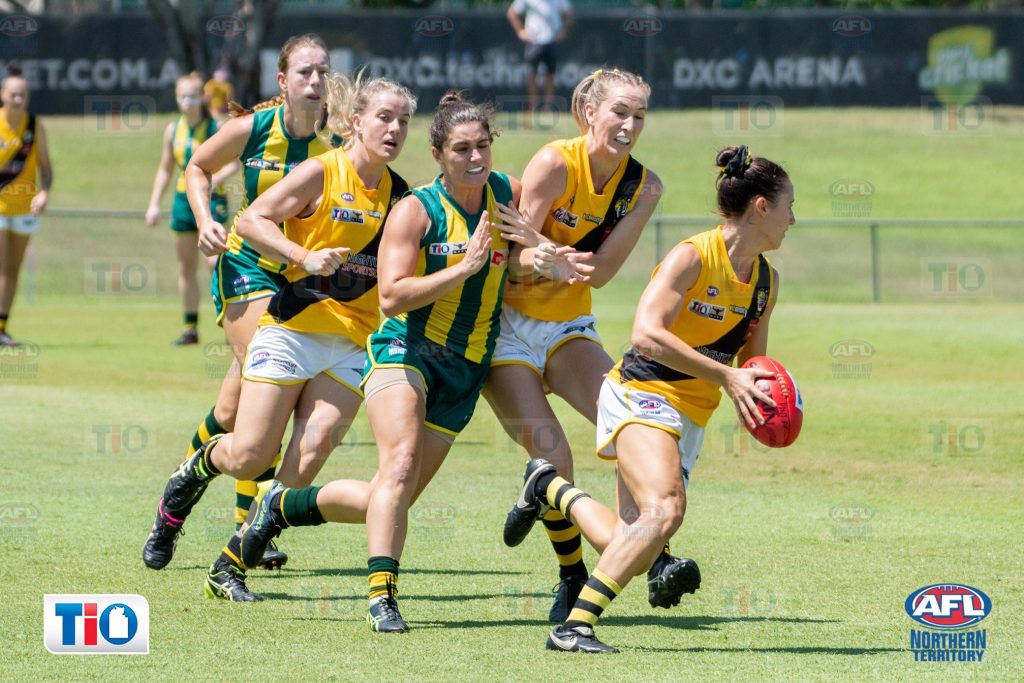 ROUND 6 of the 2020/21 Northern Territory Football League (NTFL) Women’s Premier League is set to take place over the weekend, with two huge matches that could implicate top five standings on the ladder and a couple of teams coming into this round off the back of impressive wins. With five straight wins on the board this season, Pint still sits head and shoulders above the rest of the competition, although St Mary’s are hot on their tail and have what should be a percentage boosting outing this week. Wanderers have the bye this week, while two 2019/20 finals outfits will hope to leap up the ladder after shocking starts to the season.

There is a top four battle to begin proceedings this round, with fourth ranked Nightcliff hosting Darwin who currently sit third on the ladder. While Nightcliff have suffered two losses over the past two rounds, they have some huge targets up forward who will need to step up this time around against the Buffettes who have plenty of talented names of their own both up forward and in the backline. The Buffs come into this match off the back of a 113-point victory last round and a closer battle in Round 3, with form going their way as opposed to Nightcliff’s rough weeks on the track.

Nightcliff’s Emma-Lou Wolsey and Darwin’s Zoe Anderson sit equal first on the goalkicking tally, with the former sitting ahead for much of the season and the latter booting five goals last week to leap into contention. Also powering forward are Nightcliff’s Mickayla Ward and Jacqueline Anyon-Smith, who have kicked six goals apiece, with Ward appearing twice on her side’s bests list from her three outings. For Darwin, Machaelia Roberts is a huge threat up forward and has kicked four goals from three appearances, winning best on ground honours twice, while Kylie Duggan has been consistent as ever this season.

St Mary’s will hope to raise their percentage and really challenge Pint atop the ladder this round when they take on cellar-dwellers Tracy Village. The Razorbacks have had a very rocky start to the season and suffered another huge loss last round, ultimately needing a miracle here if they want to really challenge the Saints this week. St Mary’s have lost just the one game this season and even then that was by a close 11-point margin, while Razorbacks have scored just 20 points all season and conceded a whopping 390 points compared to the Saints’ 99 conceded points from five matches.

Indianna Hughes, Zhoe Clarke and Kiri Marschall are the trio to watch for the Razorbacks, and have been the most consistent performers for Tracy Village this season regardless of the scorelines, rarely letting up with their respective pressure both on and off the ball. All three players have been named in the best three times, with both Hughes and Marschall only playing three of the side’s four matches. For the Saints, a flurry of multiple goalkickers is getting the job done each week, with plenty of firepower forcing teams to spread thin to defend the likes of Michaela Long (seven goals) and Jasmine Anderson (five), while four players have booted four goals apiece for the season, including Victorian best on ground frontrunner, Ash Melnikas who has been named among the best four times.

Waratah are the next team that will have a go at knocking the confident Queen Ants off their throne, sitting in fifth on just the one win but with a winning mentality at the helm. That being said, there is no doubt Pint has what it takes to win this one, and like many of the other top sides have enough firepower up forward and excellent defensive pressure down back to constantly provide a threat across the field. Pint has only conceded 71 points this season, so will need to maintain that consistency here.

Waratah come into this match fresh off the bye so will look to take advantage of their fresh legs, and will also hope to have Lisa Micelli back in the fray after booting five goals in Round 3 during her first appearance this season. Caitlin Couch and Jenna Singh are the other players to watch with their ability to provide that scoreboard pressure. For Pint, their 14 individual goalkickers prove crucial each week, forcing heads to turn constantly with Jasmyn Hewett (seven goals) and Casey Morris (six) leading the charge up forward. Morris and Amy Chittick are the lone Queen Ants with three bests appearances to their name, continuously putting out consistent performances.

The final match of the round will see the Magpies and Crocs face off, with plenty of history making this encounter an intriguing one. While Southern Districts came away with their first win of the season last round, Palmerston suffered another disappointing loss to remain towards the bottom of the ladder. Both sides have struggled to bring the heat consistently this season, and sit towards the bottom end of the ladder with just one win apiece and are on similar percentages, making this match one to watch.

Iesha Ronberg and Tabitha May have been the most consistent players for the Magpies through their four matches, putting goals on the board but most importantly never far from the contest, consistently having an impact. Arthurina Moreen has proven to be the key up forward with five goals on the board from her two outings, while Natasha Medbury is not far behind with three to her name. For the Districts, Ebony Miller is consistently one to watch, are are Lateesha Jeffrey and Tayla Thorn with all three playing in all four matches this season, while Michala Shaw has booted two goals.