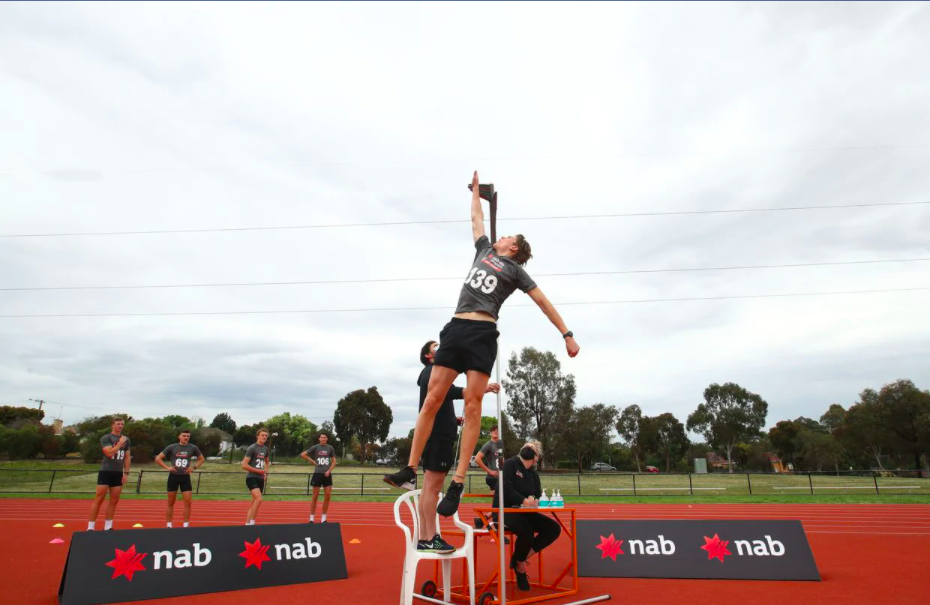 Having already looked at the 20-metre sprint times and agility test results, we now shift our focus to the standing and running vertical jumps. These tests are essentially self explanatory, designed to measure how high athletes can jump; firstly off a standing start, and then by leaping off either foot on the run. The results are measured by scaling each athletes’ absolute score with their respective heights, as to prevent taller players from dominating and to gain a greater reading of true vertical ability.

Three players registered top 10 leaps across all three tests; namely Godfrey Okerenyang, Chris Walker, and Kellen Johnson. Okerenyang, a GWS Academy member, hails from a high-level athletics background and dominated the power-based tests across the board. His 84cm standing jump was the best effort nationwide, as was his running vertical jump off the right side (92cm). Walker is a Fremantle NGA prospect out of East Fremantle, and the twin brother of top 30 hopeful Brandon Walker, who did not participate in the event. West Perth’s Johnson came back onto the radar having made a late-season return from injury, and served a handy reminder of his athleticism as a key defender.

Another two players already tied to clubs also managed to achieve top 10 results in the running jumps off both feet. The first was Josh Eyre, a Calder Cannons graduate who is part of Essendon’s NGA program. He is quite a raw key forward, but clearly has the athleticism to also run out as a utility. The other player to do so was Aiden Fyfe, one of the standout Gold Coast Academy members. He is a classy outside type who played senior QAFL football this year. Both loom as late draft chances.

After Okerenyang took out two events, he was resigned to second spot in the running vertical jump (left) as Murray forward Dominic Bedendo put in the highest jump overall, powering 99cm vertically. In terms of top-end draft prospects around the mark, Denver Grainger-Barras notched an 87cm running jump off his right side, while first round hopefuls such as Jack Carroll and Archie Perkins also showed off their aerial aptitude in the same test. Perkins, along with Bedendo and Jack Briskey, also featured in preseason top 10s in the jumping categories. Jamarra Ugle-Hagan, Joel Western, and Brandon Walker are familiar names to have also snuck onto those lists, but the latter two did not test this time around.