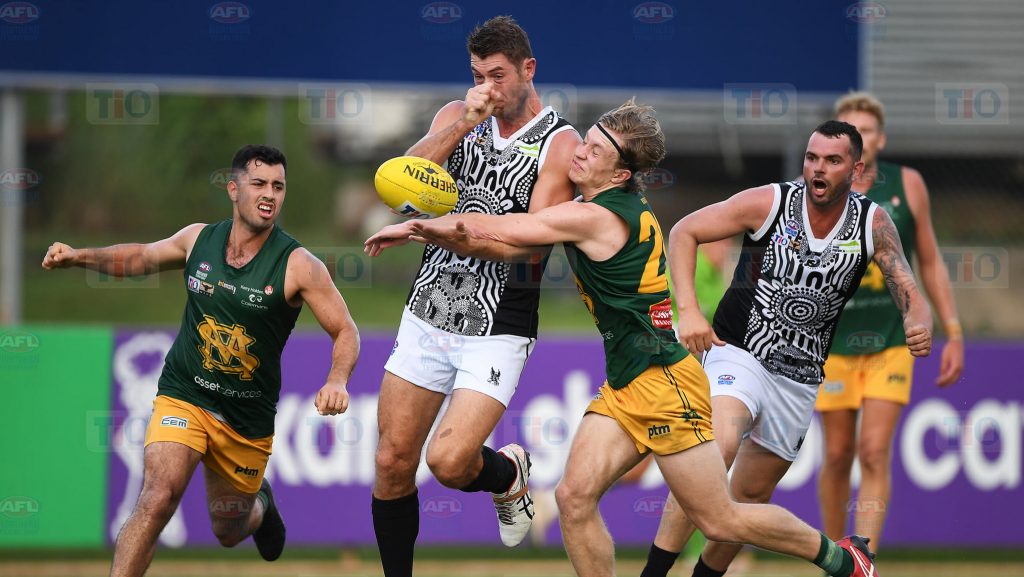 ROUND 5 of the Northern Territory Football League (NTFL) Men’s Premier League saw reigning premier Nightcliff return to the winners list in style, becoming the first side to knock off Darwin in season 2020/21 along the way. Waratah opened the weekend’s action by consigning Tiwi to its fifth loss, while St Mary’s rise continues on the back of a third-consecutive victory, and Wanderers secured its fourth win for the season to hold onto second spot. All that, and more in our Round 5 wrap.

Waratah’s focus on a fast start proved fruitful as the Warriors came out firing to set up a 35-point win over Tiwi on Saturday afternoon. By three quarter time, Tahs had set up a 46-point lead to all but put the game to bed, though Tiwi managed its best period in the last to trim the final margin. The 16.16 (112) to 12.5 (77) result at TIO Stadium sees the Bombers sink to 0-5 despite again showing some promise, while Waratah is poised within the top five at 3-2.

The likes of Abe Ankers and co-captain Nick Gooch set the tone for Waratah in a solid show of intent, while the likes of Cameron Arnold (four goals), James Edmonds (three), and Jae McGrath (two) all benefitted from their side’s midfield strength. Callum Searle was part of that, also booting two goals to round out Waratah’s multiple goalkickers. Ross Tungatalum delivered upon his surprise return to the Bombers, booting four majors as their best player afield. Another returnee in Ashton Hams also proved his worth, while Mason De Wit‘s strong season continued in defence and Harley Puruntatameri added a couple more goals to his tally.

Wanderers secured back-to-back wins with an 18-point triumph over Southern Districts on the road, seeing the Muk Muks hold on to second place after five rounds. Played under trying weather conditions, the game was led by Wanderers at each break as a two-goal cushion built in the first half was extended to three after the main break. While the Crocs’ midfield was hard to stop, the Eagles proved sturdy in defence and potent in attack to answer every question posed to them by the plucky Districts outfit, which drew level late in the final term. In the end, it was a well-deserved 13.6 (84) to 10.6 (66) result for the Eagles, who continue to prove their finals credentials at this early stage.

Brett Eddy and Simon Bates were again the match-winning wombo combo up forward for Wanderers as they combined to steer their side home in the final term. The former finished with five goals to make it 12 in two games, while the latter popped up with two. The likes of Mitchell Taylor and Brodie Newman were excellent down the other end, while Dane McFarlane and Ronald Fejo continue to deliver in midfield. James Tsitas‘ form shone through for Southern Districts, supported well by Nikolaus Rokahr in the engine room while Andrew Boseley (three goals) proved a reliable target inside 50. Geelong Falcons graduate Jay Dahlhaus (two) goals also found the big sticks once again, proving lively alongside Luke Kiel as the Crocs again narrowly went down.

St Mary’s romped to its third win on the trot on Saturday evening, dismantling Palmerston to the tune of 75 points at TIO Stadium. Things were looking promising for the Magpies after they booted the game’s opening goal, which was duly followed by nine unanswered majors to St Mary’s. The 53-point half time margin was extended to 72 at the next break, setting up a bleak 18.16 (124) to 7.7 (49) final scoreline for the Magpies. After a disappointing first fortnight, the Saints now sit comfortably within finals calculations at 3-2, while for all Palmerston’s promise, the black and whites sit seventh at 1-4.

Jackson Paine delivered most of the hurt for St Mary’s, booting eight goals and leaving plenty more out there with poor finishing. Young gun Beau Tedcastle joined in on the act with four majors, while the likes of Lucas Jellyman-Turner and Nate Paredes found plenty of the ball. In what was a disappointing night for Palmerston, the performance of Nigel Lockyer Jnr in defence was a shining light, while reliable big man Matthew Dennis was also valiant in a losing effort. Ultimately, the Magpies were outclassed around the ground and have plenty of work to do to turn their season around, much like the Saints have managed of late.

Nightcliff served a reminder of its class as the competition’s benchmark with an impressive 21-point win over Darwin at TIO Stadium. Under lights, the Tigers returned to winning form and snapped Darwin’s undefeated streak in one fell swoop, producing vintage play in the first half to set up a 40-point lead at the main break. The Buffs’ chance to hit back came in the third term, though their nine scoring shots only yielded a haul of 2.7 as Nightcliff remained well ahead and rounded out an important victory.

Veteran Cam Ilett was on fire early for Nightcliff and finished with four goals, latching onto quick entries and aiding his side’s efficient conversion. Trent Melville got back among the goals with three, while Kyle Emery also managed two. Further afield, Dom Brew and Phillip Wills were excellent through the middle. Brodie Foster was Darwin’s lone multiple goalkicker, but the likes of Ishmael Palmer and Jarrod Stokes also found the big sticks once each while proving influential. Timothy Eldridge was another important factor, but could not quite help drag Darwin back into the game.