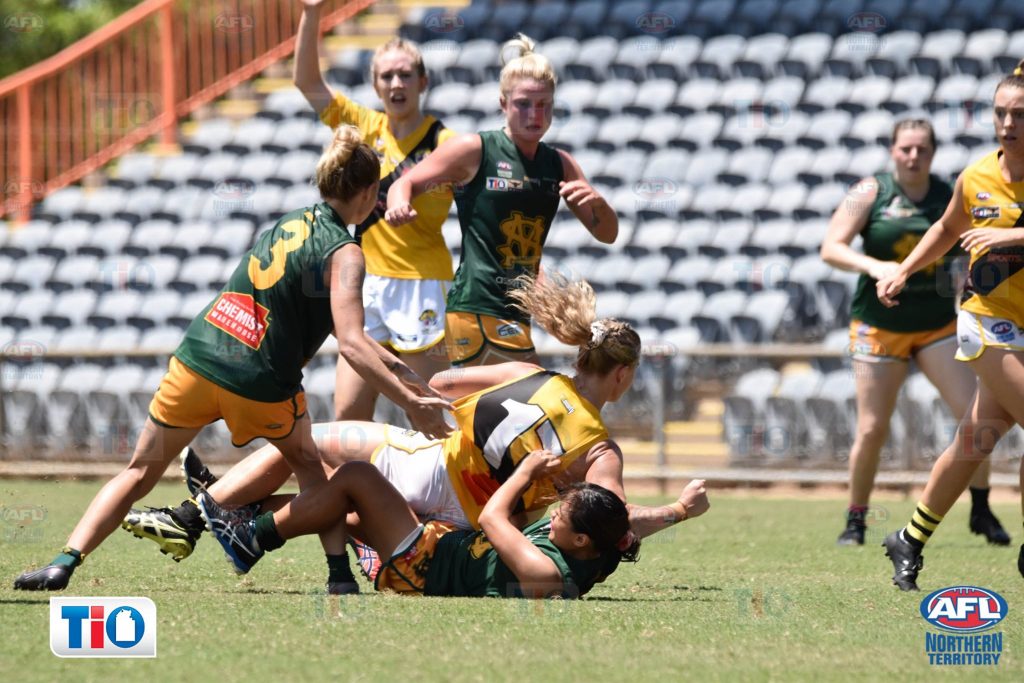 JUST one team remains at the top of the Northern Territory Football League (NTFL) Women’s Premier League ladder heading into Round 5, and one side that was knocked off their perch with a loss last round will look to execute the same result this round when Pint and Nightcliff go head-to-head. A renewed looking Palmerston Magpies will look to continue their rise up the ladder after a sloppy start to the season, while Tracy Village will have their work cut out for them. As per usual, all four matches will play on Saturday afternoon, while Waratah was handed the bye.

Reigning premiers Southern Districts will be chomping at the bit after a bye last round, with no wins on the board yet in season 2020/21 and plenty to play for. The Crocs are possibly in their best position to win this round after the shaky tart, with fresh legs and a similarly struggling opposition in the Wanderers. While the Wanderers had a similarly shaky opening round, they were fortunate to take on Tracy Village in Round 2 which built up some confidence but have struggled since then. While their form is technically in better shape than Districts’ at this point in time, the reigning premiers cannot be underestimated given their scoring ability when they get going and plenty of pride coming into this match.

Wanderers’ Kaitlyn Armstrong may have been rendered goalless last round but has proven to be a huge threat up forward so far this season, but if she can be held off by the Crocs this week the Wanderers could be in trouble with just four other players managing to get on the board thus far. Djimila Totham and Shekeine De Satge have been named in the best on three occasions, while for the Crocs they will be looking to not only bring a little bit of consistency to their game but also some excitement from Ebony Miller and Tayla Thorn.

A huge top three battle is set between the undefeated Pint and Nightcliff, with the former holding mantle at the top of the ladder and the latter looking to avenge their frustrating Round 4 loss last week. Both teams have had an excellent start to the season and have rarely faltered out the front, with the Queen Ants ultimately coming into this match as favourites credit to their firepower and proven ability to win under pressure. While Nightcliff have plenty of talent of their own inside their forward 50, with 237 points for compared to Pint’s 252, they have conceded the most points of the teams within the top four so will need to ensure their back end matches the firepower up forward.

Nightcliff’s Emma-Lou Wolsey still leads the goal tally following Round 4 with 11 majors to her name, with Jacqueline Anyon-Smith zipping up the leaderboard with three goals last round, stepping up as Wolsey was kept quiet by the Saints. But while Wolsey has dominated up forward for the Tigers, Pint’s Jasmyn Hewett and Casey Morris have been sharing the footy around, combining well up forward and providing a couple of crucial targets on a list with 12 proven goalkickers just across the opening four rounds. Between the two teams, Pint centurion Cassie Henderson is the lone player to have been named in the best three times.

Collecting two wins under their belts from three matches, the Buffettes will look to capitalise here and look to break into the top three when they take on the lowly Tracy Village. Always a tough ask, The Darwin side has dropped just one game in a close encounter, and otherwise have been fairly consistent this season. They outlasted a tough Waratah outfit last round and have plenty of exciting names across the field, so will hope to put some real pressure not only on the scoreboard this round but also on the three teams sitting above them on the ladder. The Razorbacks are yet to score more than single digits per game throughout the season so far, and while they have only played three matches from four rounds, they have struggled to not only put goals on the board but also negate their opposition – something Darwin will hope to capitalise off with its flurry of consistent goalkickers.

With just two goals for the season so far, Meagan Wylie and Indianna Hughes will hope to provide a spark up forward for the Razorbacks, and with both named in the best two and three times respectively, they can be relied on to do just that with their continuous hunt on the ball. For the Buffettes, Zoe Anderson and Machaelia Roberts lead the goalkicking tally, with a flurry of other handy options able to put goals on the board where required making for a hugely unpredictable side up forward.

The final match of the round will see St Mary’s host Palmerston Magpies, with the Saints sitting up in second on the ladder on percentage and the Magpies sitting in sixth after finally getting their first win on the board last round. While the Saints certainly have the winning form going into this round, only defeated by ladder-leading Pint in Round 2 by a close margin, there is no doubt the Magpies’ excellent 87-point win over the Razorbacks last round will give the side plenty of confidence heading into this matchup.

One of the intriguing things about St Mary’s this season is their winning ability regardless of the high turnover of players each round. Watch out for Michaela Long who has booted six goal across her four outings while five other player have booted more than one goal this season. Megan Williamson has been named among the best in all four matches, while Claudia Whitfort has been named in the best three times and booted four majors. For the Magpies, Arthurina Moreen (four goals) and Natasha Medbury (three) were crucial in last round’s victory, both playing just their second games for the season and will look to overwhelm the Saints’ defence this week.