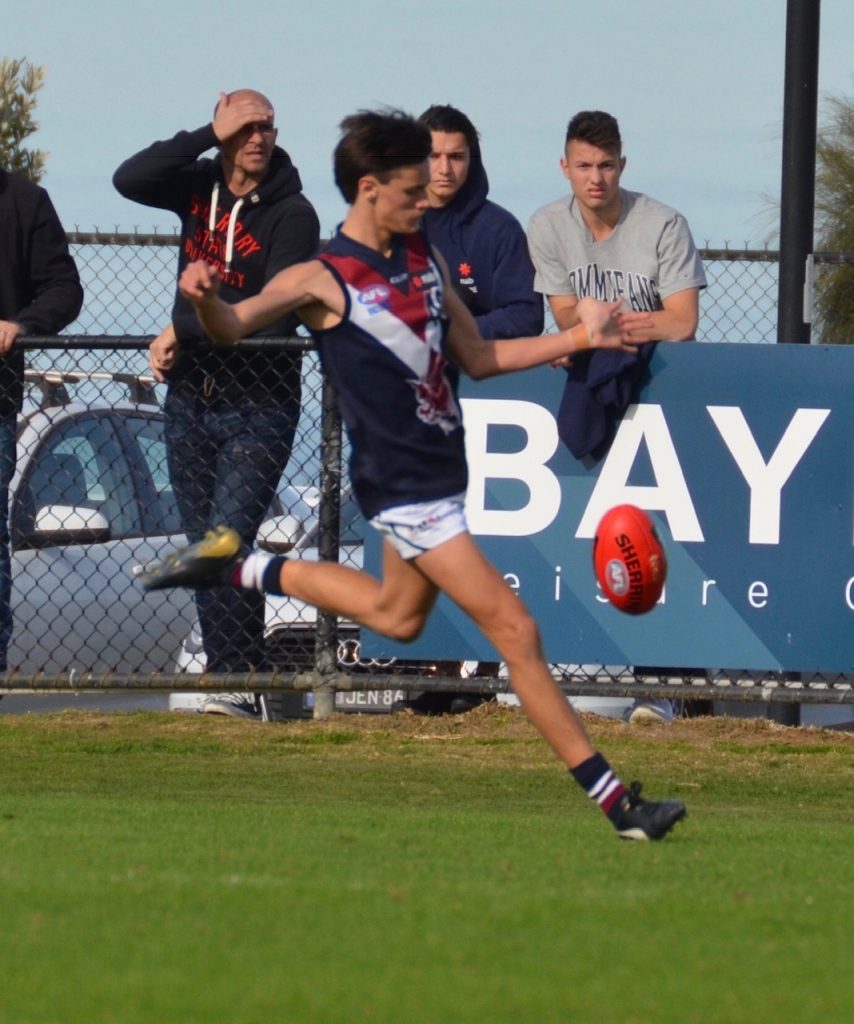 LACHLAN Carrigan has enjoyed a steep rise in draft stocks this year, and he hasn’t even registered an official game of footy. The Sandringham Dragons speedster is a prospect billed with the increasingly popular buzzword, ‘upside’. A December birth, Carrigan is one of the youngest top-agers available in this year’s draft pool and has seen his rate of development climb rapidly since making his NAB League debut in Round 11, last year.

The most promising part? He still has plenty of growing and improvement left.

“I guess just the potential that I have with my body being a December birth, the upside of me growing (is a trait recruiters value),” Carrigan told Draft Central. “My grandfather is 6’6″ and my uncle’s 6’4″ so I’ve got a lot of growing left in me and I’ll fill out obviously.”

While his growth has hardly been stunted, Carrigan’s on-field feats were limited to a couple of big preseason performances which built upon the promise shown in five outings for Sandringham in 2019. The 17-year-old not only grew to 189cm, but was also able to showcase his expanded athletic base with outstanding preseason testing results.

His speed-endurance mix was on full show; registering a 2.91-second 20-metre sprint, 21.6 score on the yo-yo test, and even running vertical jumps of over 80cm off either foot. It meant on top of his eye-catching returns on-field, recruiters also had some data which jumped off the page, keeping Carrigan’s name fresh in their minds.

While he had hoped to really press his case to be drafted in 2020, Carrigan says he had not been particularly “fazed” by garnering perhaps a little less attention than some of his highly-touted teammates, at least coming into the year.

“It’s something you get used to, just going under the radar,” he said. “Unfortunately I couldn’t play this year, I was really excited to showcase what I can do (and earn) the team success we thought we could achieve. But always going under the radar hasn’t really fazed me, I’ve put in the hard work that needs to be done and achieved things.”

Carrigan’s motivation is far from waning either, even in the face of Melbourne’s Covid-19 restrictions. The Hampton Rovers junior was able to set up a home gym with equipment from his former club, while also doing touch work and running throughout the week. With Year 12 studies at St. Bede’s College also thrown in the mix, there is plenty on Carrigan’s plate, though he says life has been “pretty cruisy” of late.

“I’m pretty much kicking every day, just with mates doing whatever we can do,” he said. “On top of that I’ll also be out (at the) gym four to five times a week and then just running as well. But it’s pretty cruisy, lots of study too.

“Dad works at Hampton Rovers so we went in and got a lot of their gym equipment. We set them all up in the backyard and in the lounge room so that’s been really good. And then just using the facilities around in the 5km (radius) I guess.

“The motivation is always there for me when it comes to footy. Maybe not as much with school but definitely for footy. Training, whether it’s in the weight room, running or just doing the extras, I think the motivation comes easily.”

The AFL hopeful has also been in contact with around a dozen clubs throughout the year and is beginning to gauge how the next few months, or even year may pan out. A Carlton fan, Carrigan hasn’t spoken to the Blues just yet but is planning for multiple outcomes by the end of 2020. With the NAB League extended to an Under 19 competition, the chance to prove himself at that level remains should he be overlooked in this year’s draft.

“(Discussions with clubs) have been really mixed,” Carrigan said. “I don’t think many clubs have delved into the talks about where they’d pick me up. We get a few, but it has been a mix of ‘we’ll pick you up in the late rounds and take a punt’ or ‘we want to see you play more footy’.

“I’m pretty academic… after school, I’m still deciding if I go back to the Dragons. I just want to put in all my effort there and maybe if I’ve got enough free time around halfway through the year I’ll pick up a (university) course. The courses I’m looking at are probably accounting or commerce, and also sports management.”

The running wingman also does a fair bit of footballing study, moulding his game on the likes of Hugh McCluggage for his inside and outside balance, as well as Josh Kelly and Isaac Smith.

“I love footy so I watch a lot of it,” he said. “I think I’m very versatile (but) my favourite position is probably the wing, just because I’ve played there the most and I know how to play it.

“I’ve been working hard on a lot of areas. I think my main areas over the summer, this preseason, were just my contested work and my ability to hit the scoreboard. You can get better at everything I guess.”

While much of his journey, especially of late, has been carried out among the unknown, Carrigan says he has had “a lot of great coaches and mentors” to lean on throughout the experience.

Carrigan’s next point of call will be at the Vic Metro Draft Combine on Saturday, though he will not participate in the testing. Draft day looms on the week of December 7.