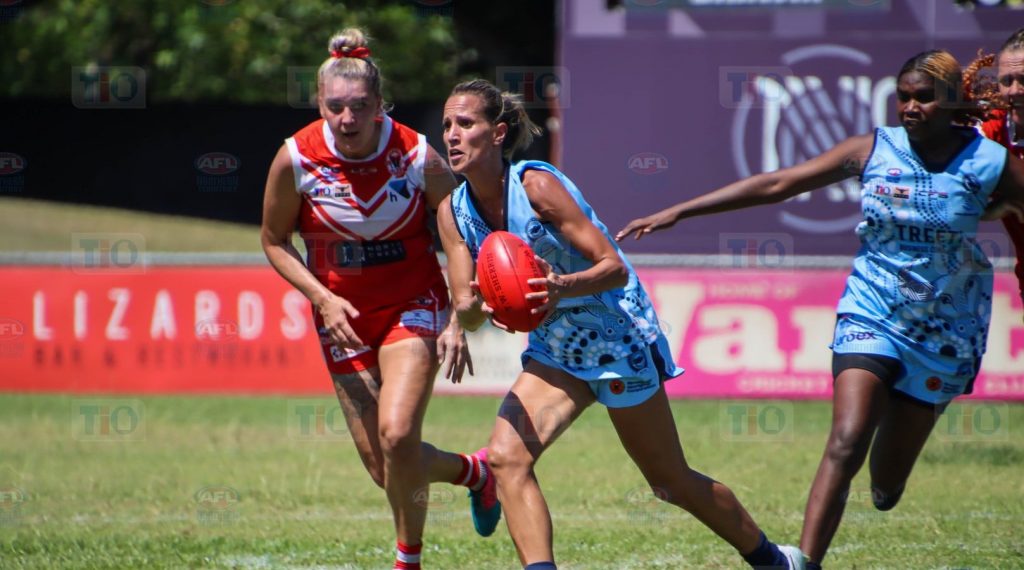 ROUND 4 of the Northern Territory Football League (NTFL) Women’s Premier League saw Palmerston and Pint secure blowout victories, while St Mary’s and Darwin got the better of fellow top five opponents on what was a super Saturday of play. The results see Pint remain the sole undefeated side atop the ladder, while Tracy Village is still searching for its first win and Southern Districts freshened up with a bye. All that, and more in our weekend wrap.

Palmerston got on the board for season 2020/21 at the third time of asking, thumping the winless Tracy Village by 87 points at Cazaly’s Arena on Saturday. The Magpies took an early lead and never looked back, setting up their victory with four goals to nil in the first half. The damage was only compounded after half time despite the Razorbacks getting on the board, as Palmerston piled on a further 10 goals to storm home 14.12 (96) to 1.3 (9) winners.

Arthurina Moreen (four goals) and Natasha Medbury (three) combined to claim half of the Magpies’ majors, while Tabitha May rounded out the multiple goalkickers with two. Meagan Wylie was Tracy Village’s lone player to find the big sticks, as her side was soundly outdone going forward. The likes of Janet Baird and Michaeline Brown were others to both be named among the best and hit the scoreboard for Palmerston, but it was Jo Guthridge who earned best afield honours. Indianna Hughes gained the same credit for Tracy Village in the loss.

Pint maintained its flawless start to the season with a resounding 94-point win over Wanderers at TIO Oval on Saturday morning. The Queen Ants started steadily with a two-goal buffer at the first break, before piling on five goals in both the second and third terms to set up the big victory. All the while, Wanderers went scoreless, with Cassie Ormsby converting the Eagles’ first six-pointer in the final term en route to the 16.7 (103) to 1.3 (9) scoreline. It did little to arrest Pint’s momentum, as the victors also put through another four majors.

Casey Morris led a remarkable group of five multiple goalkickers for Pint, bagging a handful of goals while Kristen Smits (three) managed the next-best haul. Jasmyn Hewett was another to trouble the scorers with two majors as she was named among the Queenants’ best behind Amy Chittick and Cassie Henderson. Meanwhile, Morgan Johnston and Tishara Davern led the way for Wanderers alongside goalkicker, Ormsby as the Eagles fell to a second-consecutive defeat to sit seventh at 1-3. Pint is still riding high in top spot having knocked over every challenger thus far.

Finals ramifications were in play when St Mary’s and Nightcliff went to battle at TIO Stadium on Saturday morning, and it was the Saints who gained a big boost by becoming the first side to defeat the Tigers this season. The 44-point victory saw St Mary’s jump its opponent into second spot, with both sides currently boasting 3-1 records within the top five. A five-goal to one second term in favour of the victors did most of the damage, as Nightcliff failed to match the Saints’ firepower and fast ball movement throughout the contest.

Jasmine Anderson and Alana Coombes snared three goals apiece for the green and gold, with Michaela Long (two goals) rounding out St Mary’s multiple goalkickers. Up the other end, Jacqueline Anyon-Smith spearheaded the Tigers’ attack with three majors, as fellow goal-getter Lauren Gooden was named among the best behind Katrina Simmons. Coombes was adjudged St Mary’s best afield in front of Adelaide Crows AFLW livewire Danielle Ponter, as well as the likes of Megan Williamson and Claudia Whitford, who have enjoyed strong starts to the season among others.

Another top five clash rounded out the weekend proceedings, as Darwin defeated Waratah by seven points in by far the closest game of the round. Tahs’ were simply unable to catch the Buffettes back up after drawing level at half time, with a two-goal to one final term sealing the 7.8 (50) to 6.7 (43) win for Darwin. The result sees the Double Blues return to the winners list and gain a positive record, while Waratah slides to 1-2-1 and has not won since the opening round. However, the Warriors remain fifth having clinched a draw last time out.

It was not all bad for Waratah, especially given Lisa Miceli bagged an equal round-high five goals, with Lisa Roberts their side’s only other goalkicker. A more even spread saw Johanna Dodsworth (two goals) finish as Darwin’s lone multiple goalkicker, as five more Buffettes’ found the big sticks across the day. Unsurprisingly, Machaelia Roberts and Tayla Hart-Aluni fronted Darwin’s best players, with Jemma Iacono also instrumental in the win from defence. After the hotly-contested match, Waratah will look to rebound on the back of a bye next week.