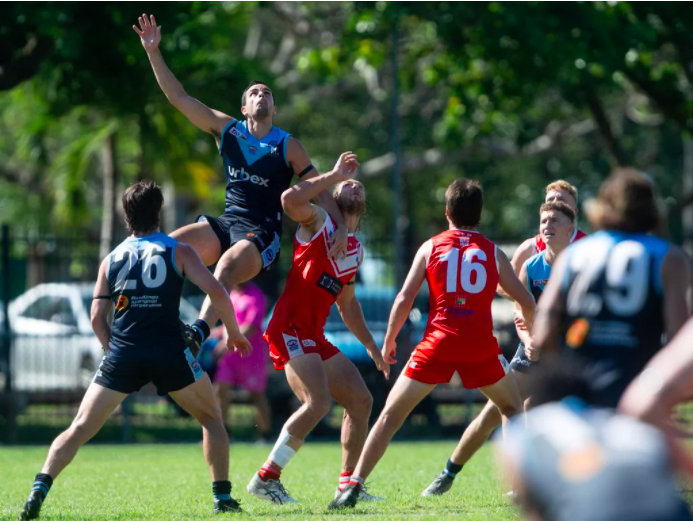 Wanderers’ hot start to the 2020/21 season continued on Friday night, as the Eagles accounted for Palmerston by 48 points to climb into second spot. The 18.14 (122) to 11.8 (74) result at Cazalys Arena was built on the back of Wanderers’ ruthlessness, with the Muk Muks consistently able to apply scoreboard pressure and pull away after quarter time. Palmerston had no real answer in the end, only really running with their opponents for half of the four quarters.

Simon Bates was arguably best afield after booting 5.3, only outdone on the scoreboard by Brett Eddy‘s 7.3. Meanwhile, the midfield pairing of Dane McFarlane (33 disposals, seven inside 50s, one goal) and Shaun Mannagh (28 disposals, six clearances, one goal) worked wonders for the winners. Ronald Fejo was another to impact going forward with nine inside 50s, while Warwick Williams and Brodie Newman combined for 11 rebound 50s down back.

St Mary’s produced some vintage form to make it two wins on the hop, becoming the first team to defeat Nightcliff in season 2020/21 with a 19-point win at TIO Stadium. Under Friday night lights, the Saints looked a much more assured side and worked hard to deliver a monster four-quarter effort which saw them run out 11.16 (82) to 8.15 (63) victors. Having held a lead of two goals or thereabouts throughout the contest, St Mary’s kept an unusually wasteful Nightcliff outfit scoreless in the final term to consolidate the win.

The Tigers’ maiden loss did not come without its fair share of solid contributors, with Dom Brew and Brodie Filo each managing 20 disposals, five clearances, and four inside 50s. Veteran Cam Ilett added a few highlights to his illustrious reel with a nice hanger and three goals up forward, while Victorian Luca Goonan booted two majors from his 14 disposals. After snagging 11 goals in his previous two outings, Kyle Emery was kept to just one by the stingy Saints defence.

One team’s ‘0’ had to go when the winless Tiwi Bombers and Southern Districts met on Saturday afternoon, and it was the Crocs who ran away 58-point winners on enemy turf. In very warm conditions on Bathurst Island, Districts’ fitness shone through after quarter time as the home side ran out of legs, going goalless in the second and fourth quarters. A raft of Geelong-themed recruits helped the Crocs overpower Tiwi, slamming home a total of 33 scoring shots.

Angus Byrne and Harley Puruntatameri were at the forefront of Tiwi’s hot start, each snagging multiple goals in the opening term to give their side a short-lived edge. The latter would go on to boot one more major, with Nick Ebinger also troubling the scorers twice. Bigman Jack Monigatti won 26 hitouts in a mammoth effort, aiding the cause of Nathan Scagliarini (26 disposals, six clearances) and Fletcher Carroll (25 disposals, five clearances). Meanwhile, Mason De Wit again took up his defensive post and registered 11 rebound 50s.

Darwin maintained its perfect start to the season, taking out a thriller against Waratah by six points on Saturday afternoon. In what would prove to be a danger game at Gardens Oval, the Buffs led comfortably by eight-straight goals at three quarter time, before fatigue kicked in and the Warriors hit back with nine goals in the final term. Tahs fell just short in the end, with the 16.9 (105) to 15.9 (99) result seeing them sit fourth at 2-2. Meanwhile, the Buffs are riding high in top spot on the back of their 4-0 run.

Jarrod Stokes played a major role for the Double Blues, with his two clutch goals coming from a total of 19 disposals, seven clearances, and seven inside 50s. Fellow experienced head Matt Campbell reverted back to a role in the forwardline, snaring five goals to justify a masterstroke from coach Cameron Stokes. Prolific forward Brodie Foster had plenty of chances and finished with 4.4, while Joey Collinson bagged two majors. Jalen Clarke (16 dispsoals, one goal) and Ryan Pendlebury (16 disposals, six marks, seven inside 50s) were other impactful players for the Buffs.

Waratah was serviced well by Joshua Carmichael, who managed a team-high 22 disposals and eight clearances. Robert Turnbull and Jake Sutton both breached the 20-disposal mark and booted two goals each, while Callum Searle notched four majors from his 17 touches. Rounding out the multiple goalkickers, Cameron Arnold slammed home three for the home side in what was another valiant team effort.