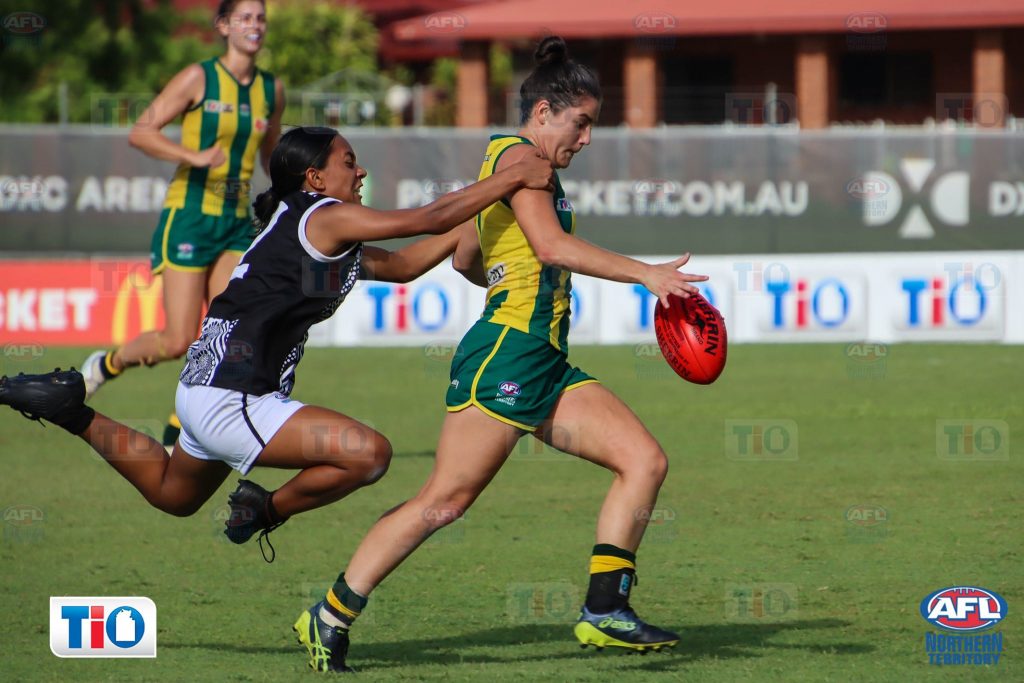 ROUND 4 of the 2020/21 NTFL Women’s Premier League season will see all four matches played on Saturday once more, with reigning premiers Southern Districts having a week off with the bye this round. Nightcliff and Pint still sit atop the ladder on three wins straight, while one of the three winless teams will get points on the board in the opening match of the round. A battle between ladder-leading Nightcliff and third placed St Mary’s looms as the match of the round, though the battle to stay off the bottom of the ladder could prove much more significant with three teams sitting on just the one win – making a big move up the ladder a viable outcome at the end of the round.

One of the three winless sides will get points on the board this round when Palmerston and Tracy Village go head-to-head, and while the two cellar dwellers have only played two matches apiece thanks to respective bye rounds, both teams need to get something on the board this week to give them a chance of bouncing back from the rough start. Ultimately, neither team has been a real worry on the scoreboard, combining for just 32 points throughout the opening rounds. That being said, there have been some consistent performers across the field for both teams, with Magpies’ Iesha Ronberg, Khani White and Shanoah Leedie named in the best twice, as have Razorbacks’ Indianna Hughes – the side’s lone goalkicker – Meagan Wylie and Sarah Wilson. Expect a tight match between these two, although the Magpies’ success and winning mentality over past seasons will surely work in their favour against the Razorbacks.

The Wanderers have a tough battle this week, coming up against a Pint outfit that still sits undefeated after three rounds and have shown no signs of stopping. While Wanderers do have the one win on the board from Round 2, the side’s main issue has been a lack of opportunity up forward, tending to crumble under tight defensive pressure. Pint, however, have found some excellent form with the help of a couple new names from down south, and weathered the storm well when required to showcase how their defensive outfit can be just as cohesive as their exciting frontline. With plenty of firepower out the front and six of their eight goalkickers on multiple majors, Jasmyn Hewett and Jessie Baumer (five goals from three games and four from two, respectively) are big targets while Cassie Henderson has been influential time and time again. For Wanderers, Djimila Totham has been critical around the ground, named in the best three times while Kaitlyn Armstrong has proved hard to stop when she gets going, booting 10 majors in three games to be equal-leading goalkicker.

A top battle is expected when ladder-leading Nightcliff head to take on third placed St Mary’s, with the Saints’ Round 3 victory over the Buffettes injecting plenty of confidence into the side. Both teams are more than capable of maintaining pressure and composure even in a close contest while firepower is no issue for either side, with Nightcliff boasting the current equal-leading goalkicker in Emma-Lou Wolsey (10 goals) and Mickayla Ward (equal second with five goals, two bests). While St Mary’s does not feature in the top five for scoring, that is more due to the shared load out the front than a lack of opportunity with 10 individual goalkickers so far this season and three who have booted more than one. Ash Melnikas and Michaela Long (four goals apiece) are the ones to watch inside 50, with the former and Megan Williamson named in the best three times from three matches.

These two sides come into an unprecedented matchup in at fourth and fifth, though Buffettes have only played two games – only winning one – thanks to the bye while Waratah won by default in the first round and were faced with a draw in Round 3. While Waratah has been competitive in patches, expect the firepower of the Buffettes to control proceedings with so many players capable of shouldering the load. Both Zoe Anderson and Machaelia Roberts boast not only goal sense but also plenty of composure with five and four goals to their name, while Waratah’s Jenna Singh has been consistent as ever, booting three goals alongside Caitlin Couch who has booted three from two outings. Lauren O’Shea and Lisa Roberts are excitement machines when they get going, and while both have put a goal on the board to start the season they will hope to explode out of the blocks.