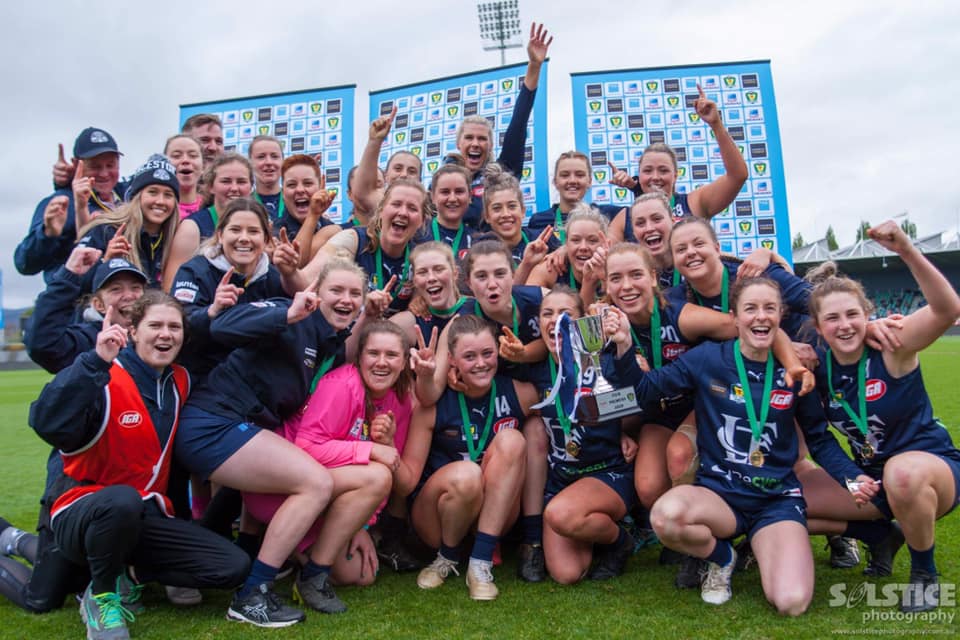 The minor premiers were slow out of the gates, with Glenorchy controlling the majority of the play early. The Magpies were kicking with the wind and locked the ball in their forward half for the majority of the first quarter. However, they dropped some easy marks inside 50 and could not capitalise on their opportunities. Elise Barwick earned a free kick in a forward 50 ruck contest midway through the term, but she got too close to the woman on the mark and opened the scoring with a behind. Tiarna Ford, who looked dangerous in front of goal early, hit the post with a snap just moments later. Perri King then laid a strong tackle inside 50 and won a holding the ball decision, but she missed her set shot as well to the near side. Launceston was scoreless at quarter time and trailed by three points.

The second quarter is where Launceston won the game, as they kicked all 13 of their points in this term. Going towards the scoring end, the Blues were finally able to get on top in the midfield. King was the leader of their dominance, as she won plenty of clearances and created some strong link-up play through the middle of the ground. Her attack on the ball clearly set the tone for her side coming out of quarter time. In the fourth minute, forward Brooke Brown produced some magnificent play on the half-forward flank to set up Cecilia Cameron for the first goal of the match. Just minutes later, Brown kicked the second with a nice snap around the body from 30 metres out. For the rest of the quarter, Glenorchy kept kicking the ball over the boundary coming out of defence, so Launceston locked it in their forward half quite easily. Abbie Hoiberg-Cox’s dash off half-back was a highlight of this term, as was Cameron’s strong presence up forward. Launceston went into half-time with a 10-point lead.

Glenorchy had most of the play in the first half of the third term, but Launceston’s defence led by Dearne Taylor and Hayley Whyte stood up magnificently. Sarah Skinner eventually earned a free kick right in front of goal, but her set shot was touched by the woman on the mark. While the Magpies had a couple of other opportunities to hit the scoreboard, their lack of composure inside 50 continued to haunt them. They were pressing until Cameron took one of the marks of the year in defensive 50 running back with the flight to shift the momentum. Skinner was equally as courageous in this contest, as she blindly ran back the other way and copped a massive hit for her troubles. A great contested mark from Brown on the wing released the pressure for Launceston even more, and Glenorchy did not earn any more scoring opportunities for the rest of the quarter.

In the final term, Launceston always had extra numbers back to stop Glenorchy from kicking a major and getting back into the game. Ford almost broke their goal-scoring drought at the eight-minute mark, but Taylor sprinted back with desperation to touch the ball on the line. Launceston held up well after that and ran out deserving winners.