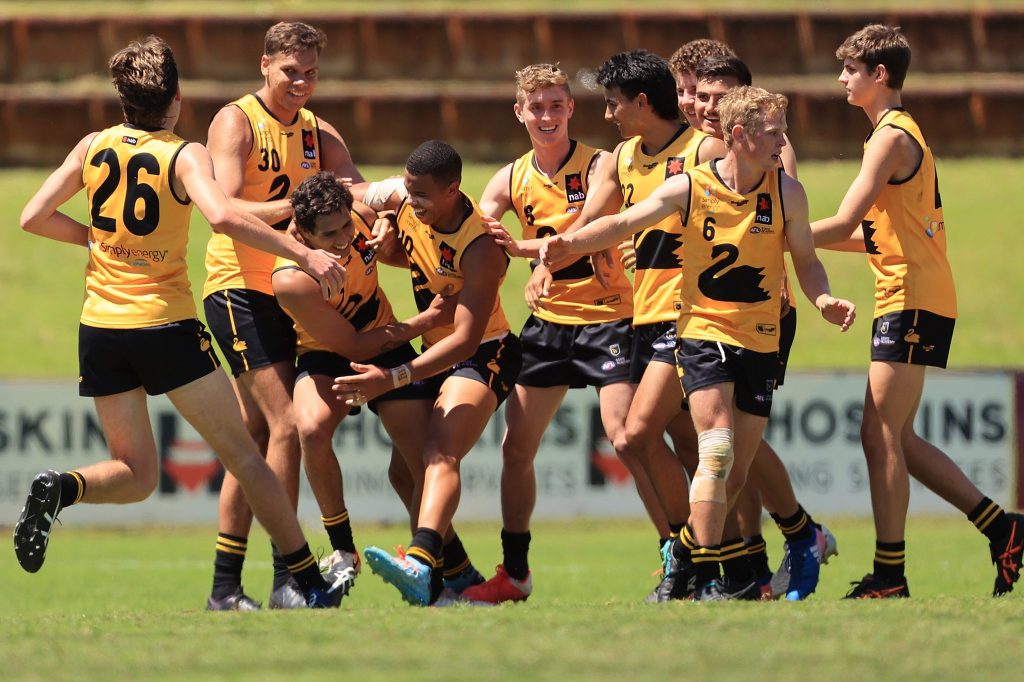 THE 2020 Western Australia Under 18 All-Stars went head-to-head for a second time on Saturday, serving as the final chance for budding WA draft prospects to impress AFL recruiters. Potential top five selection Denver Grainger-Barras was ultra-impressive, leading Team Gold to a mighty turnaround from game one in his side’s 55-point victory. Claremont prospect Max Spyvee won best afield honours, while last weekend’s most valuable player, Joel Western sustained a nasty finger injury. Our scout, Ed Pascoe was on hand to jot down his notes on some of the big performers and familiar names who took the field.

Spyvee has been impressive playing for Claremont’s League side this year and he brought that form into his one and only All-Stars appearance, winning a tonne of the ball in the middle. He was one of the main catalysts in Team Gold’s rebound after a disappointing performance last week. Spyvee got involved very early, using the ball quickly and cleanly at stoppages and winning plenty of clearances. While he is slight in stature, he was a constant around the packs, winning the ball easily on the inside and working hard on the outside to follow up a lot of his grunt work. His disposal started to get a bit scrappy after the main break but he got back to his best in the last quarter, with his clean hands around the ball leading to many scoring chains. Spyvee was a worthy winner of the best on ground honours and would have surely caught the eye of the recruiters in his last chance to do so.

Winder had a quieter outing on this occasion but still managed to show some of his eye-catching traits, with his kicking inside 50 his main point of difference this week. The talented Pell Thunder prospect will always lower his eyes going inside 50 and any forward leading out would love the ball in his hands. On the flip side, Winder himself provides a great forward target as he leads hard and his hands overhead are also clean. This came into effect with his goal in the second quarter, judging the flight of the ball well inside 50 and slotting the set shot goal with ease. Winder’s composure and smooth movement have been staples of his game this year, but a stronger four-quarter impact will help maximise his skillset going forward.

The talented bottom-ager has had a terrific season for East Fremantle, this year graduating from the back flank to the midfield with ease – not too dissimilar to former East Fremantle player, Trent Rivers. He showed both his defensive and offensive traits in this game playing off the wing and at half-back. Browne showed a great mix between his outside run and ability to attack the ground balls to win his own possessions, which helps set him apart. The smooth mover was a hard player to catch on the run and he rarely fumbled chances to win his own ball. Browne would kick a nice set shot goal in the last quarter, drifting forward to mark 30 metres out in front of goal. His best bit of play would come afterwards with a great run, bounce, and a sublime kick into the middle which opened up the game.

What a performance from the top five prospect, who wowed recruiters with his dominant first half display down back before being sent forward where he kicked two goals and showed his potential versatility. Grainger-Barras started the game extremely well, winning plenty of the ball down back and taking some ripper marks, which he does time and time again in every game he plays. His competitiveness and confidence were again on display, throwing himself into every aerial and ground level contest to give Team Black nothing every time the ball was in his area. The second half is what recruiters would have loved more than anything, as not only was he moved forward to show his versatility, but he also played well in a role he has spent little time in over the last two years. His energy brought a lot to the forward mix with some desperate spoils in the forward 50 creating scoring opportunities and his lead-up marking also impressive. His first goal came from a nice mark on the lead and set shot, while the other was a classy snap which showed his bag of tricks. With his athleticism, combativeness, and football talent it is easy to see why the Swan Districts prospect is considered one of the very best players in the 2020 draft pool.

Once again the talented bottom-age prospect from Subiaco found it all too easy to earn plenty of possessions, with his ability to win the ball all over the ground again coming to the fold. Although handball happy, Johnson rarely wasted a disposal and often stayed composed and confident whenever he had possession. He exploded in the third quarter, winning an absurd amount of the ball which included two nice bits of play; the first saw Johnson sell candy to a player on the mark, while the second was a nice fend-off to show just how confident Johnson is in his ability. The tall 192cm midfielder is firming as first round prospect in the 2021 talent pool and has put himself ahead as Western Australia’s leading prospect going into that draft.

It was a quiet game by Chapman’s standards, especially given the rebound defender averaged more than 20 disposals for West Perth this year. Of all things, he certainly wouldn’t have expected a match up with fellow elite backman, Denver Grainger-Barras in the second half, which forced Chapman to play a more defensive game. Chapman was classy with ball in hand with only one blemish in the last quarter. A lot of his possessions put his teammates in good spots with some risky kicks into the middle. Chapman did well to take a goal-saving mark on the goal line in the third quarter, and this outing perhaps a good indicator of his defensive game, with his offensive game more than proven at Colts level this year.

Spending a bit less time in the ruck compared to last week, it was great to see Lane spend more time forward to show of a few more tricks. While missing his partner in crime and Claremont teammate, Joel Western for the second half, he did well to form other partnerships with the likes of the Johnson boys, Matthew and Callum. Lane nailed his only goal in the third quarter, coming from a strong outstretched contested mark which has been a real feature for him in the last month. It is an asset which is sure to separate him from other rucks across the states. He had another chance to kick a goal in the pocket but unfortunately kicked into the man on the mark.

Neale finally got to capitalise on his chances up forward, as the big 202cm ruck/forward from South Fremantle was his side’s leading goalkicker with three majors which all came in different ways. His first goal came in the second quarter, kicking a nice goal in general play off two steps. His second was from a nice juggled contested mark and set shot conversion, while the last came in the final quarter as Lane got the ball over the back and ran into an open goal. He could have had even more from another two shots on goal, with one snap just missing. Neale didn’t really influence enough in his time in the ruck, so being able to impact forward of centre was important. With his athleticism and size, he will prove a great project for recruiters.