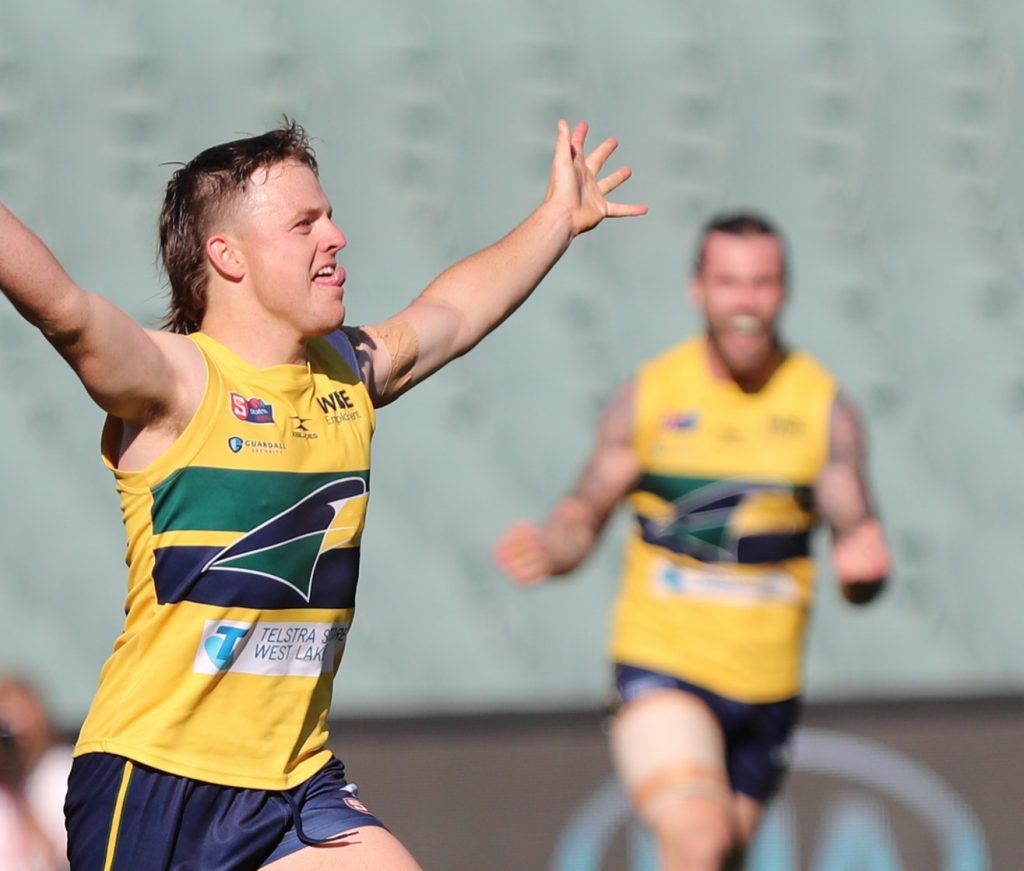 A HOST of teenaged and mature-aged draft prospects will be in action on grand final weekend of the 2020 SANFL season. At league level, the minor premiers, Woodville-West Torrens will be looking to win the clubs first Thomas Seymour Hill Trophy since 2011. But standing in their way are the 2018 premiers, North Adelaide, who booked their place in the decider with a 15-point win over the Eagles a fortnight ago.

Potential top ten draft pick Lachie Jones will once-again be expected to curtail one of the Roosters dangerous forwards. Jones has caught the attention of recruiters across the nation for his performances at senior level this year. The strong-bodied defender has been named on the half-back flank and provides plenty of flexibility for Eagles coach Jade Sheedy. Fellow youngsters Jacob Wehr and Rhyan Mansell have also been key components of the league’s most dour defensive unit.

Clare product Lachie McNeil has been a revelation through the midfield for Woodville-West Torrens, providing the side with plenty of run and carry between the arcs. North Adelaide simply must restrict the influence of superstar small forward James Rowe if senior coach Jacob Surjan is to win a flag in his first season at the helm. Rowe, who was the joint leading goalkicker during the minor rounds, broke open last weekend’s preliminary final by booting three goals in under seven minutes to start the second half. AFL recruiters will no doubt be eager to see him perform in the biggest game of the season.

With question marks looming over the fitness of dependable backman Tanner Smith, the Roosters have named young key defender Dyson Hilder on the extended bench. If selected, he would team up in defence with fellow teenager Karl Finlay, who has impressed in his first full season at senior level.

The Roosters and Eagles will also do battle in the reserves grand final, set to take place earlier in the afternoon. After finishing the home and away season in second place, the Eagles beat minor premiers Central Districts by 22 points in the semi final to earn a spot in the decider. It has been a longer road for the men from Prospect, who narrowly beat Sturt then overcame the Bulldogs to make it to the final weekend.

Eastern-suburbs rivals Sturt and Norwood have been the pace-setters of the SANFL under-18 competition all season, and have both thoroughly deserved their place in the grand final. The midfield battle looms integral to the outcome of this one, with both clubs boasting a host of draft prospects. The Double Blues will be led by consistent on-ballers Tom Powell, Mani Liddy and Will Spain, while the Norwood on-ball brigade is headlined by pocket-rocket Henry Nelligan, gut-runner Jack Saunders and arguably the competitions best ruckman, Nathan Hearing.

Sturt will be relying heavily upon talented bottom-ager Morgan Ferres, who has been named at centre-half-forward. Adelaide Next Generation Academy prospect James Borlase will line-up on the forward flank, but could easily be thrown down back if the Redlegs start to get on top. Defenders Malachy Carruthers and skipper Ned Walter will be hoping to control proceedings down back, as they have done all season.

Meanwhile, Norwood’s Finn Heard has been the competitions best key forward for much of the season and will demand plenty of attention from the Sturt defenders. Talented tall Ned Carey has also been included in the Redlegs side, along with skilful utility Michael Cavallaro and speedy bottom-ager Cooper Murley, who finished second in the McCallum Tomkins Medal voting earlier in the week, behind the aforementioned Powell.