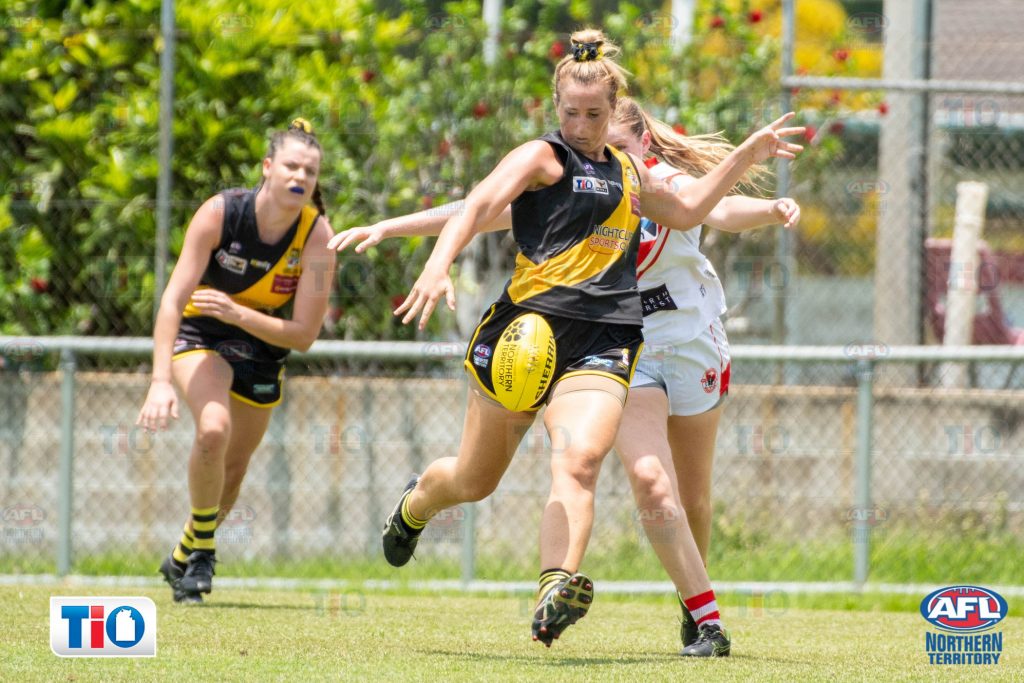 ROUND 2 of NTFL Women’s Premier League saw a huge super Saturday of matches, with all four games producing some solid performances and three matches finishing in blown out scorelines. Nightcliff and Pint continued their winning ways to sit 2-0 apiece at the top of the ladder, while Southern Districts and Tracy Village are the cellar dwellers and Palmerston Magpies had a bye.

An excellent start bode well for Nightcliff, latching onto their early momentum and building throughout thanks to Waratah’s inaccuracy in front of goal. While Nightcliff failed to score in the final term, an excellent four-goal third quarter allowed the Tigers to run away with the solid 25-point victory, staving off every attempt from the Warriors. Nightcliff’s Emma-Lou Wolsey proved she was more than capable of holding down the front-end once more with three more goals added to her tally, and was assisted by Mickayla Ward and Jacqueline Anyon-Smith who booted two majors apiece. For Waratah, Jenna Singh, Lisa Roberts and Jordan Smyth found the big sticks, with the latter named in the best among Eliza Straford and Isabella Rapson-Staropoli.

It was a great return from the Wanderers after last week’s effort, this week putting 71 points on the board to run away with an excellent 62-point win against the Razorbacks who had a couple of issues getting a score on the board once more. That being said, Tracy Village did not let up throughout and were only beaten well in the first and final quarters where they allowed the Wanderers to boot four apiece. For Tracy Village, Indianna Hughes booted the lone goal in the final quarter and was named among the bests alongside Kiri Marschall, Kaitlin Battel and Sarah Wilson – who was back in the best this week after last round. For the Wanderers, Kaitlyn Armstrong was just about unstoppable out the front with five goals on the board, aided by Aleesha Hobbs and Tasheena Rankine who booted two apiece and Georgia Halkitis and Djimila Totham who were named in the best.

It was a low-scoring thriller between Pint and St Mary’s, with the former gaining the early ascendancy and the latter fighting back well in the third to draw even on 15 points apiece at the final change. While both sides contested hard in the final term, it was Pint who were able to not only capitalise on their forward 50 entries but also pull away, eventually running away with the 11-point victory. Jasmyn Hewitt booted two for Pint, joined by Amy Chittick and Cara Evans while Kati Streader and Cassie Henderson were both named in the best. For the Saints, Danielle Ponter and Madison Harris booted a goal apiece – both in the second half – while Tesharna Maher and Ash Melnikas were named among the best in the low-scoring matchup.

Darwin Buffettes started their season with a quality win over the reigning premiers, obliterating the Crocs by 49 points with a 30-point final quarter effort getting the job done. The Crocs were outplayed for much of the game, unable to compete with the feisty Buffettes outfit and having little opportunity to put scores on the board. Machaelia Roberts was a huge target as ever up forward for the Buffs and was a force to be reckoned with alongside Zoe Anderson, booting four goals apiece and providing multiple options. Roberts was named best on ground for her efforts whilst Molly Althouse was also solid for the victors, and three individuals put a goal on the board for the winners.