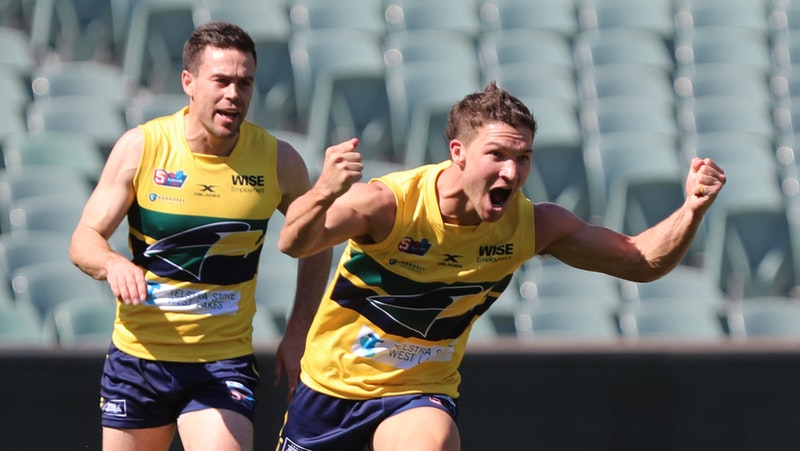 TWO of three South Australian National Football League (SANFL) minor premiers booked Grand Final tickets in their respective grades, while Central District’s Reserves bowed out in straight sets. With young guns impressing at state league level around the nation, we again narrow our focus for this week’s SANFL wrap to the performances of youth throughout the competitions. There is plenty to unpack in our next altered edition, with Under 18 prospects scattered across the two senior levels, and a bunch of youngsters impressing in the junior grade during the second week of finals. In make-or-break situations, the cream of South Australia’s finest crop rose to the top.

Minor premier, Woodville-West Torrens (WWT) earned passage to the 2020 League decider after bolting home 43-point winners over South Adelaide. Electric small forward James Rowe turned it on when it mattered, booting five goals for the Eagles to only enhance his stocks as a mature-age AFL Draft candidate this year. Rowe’s scoreboard impact helped the Eagles overcome a half-time deficit, as they piled on nine goals to South’s two in a romping second half display.

Fresh off four majors in the Reserves, Sam Lowson made the most of his senior return with two goals in this outing, while 19-year-old midfielder Lachlan McNeil also found the big sticks. Defender Jacob Wehr, who is also attracting some elite level interest, managed 14 disposals (12 kicks) and six rebound 50s, while Port Adelaide NGA prospect Lachlan Jones contributed 13 touches and five marks. Tasmanian Rhyan Mansell proved his fitness in making a return, while Ben Jungfer was another to earn a call-up via the Reserves.

There were a few Panthers who stood tall as their season came to an end, with Eamon Wilkinson among them. The 20-year-old forward snared three goals to take his season tally to 25. 17-year-old gun Jason Horne capped off a fine maiden run of senior football by hitting the scoreboard, with boom Victorian recruit Daly Andrews managing 16 touches and six clearances in a balanced effort. National Combine invitee, Tom Highmore (nine disposals, five rebound 50s) did not quite have his usual impact, but has enjoyed a stellar debut SANFL season.

The Eagles will go on to face North Adelaide in the SANFL League Grand Final, just a fortnight after going down by 15 points to the Roosters in an entertaining semi final bout.

Reserves minor premier, Central District has been knocked out of the finals in straight sets after falling short for a second-straight week, this time at the hands of North Adelaide. A seven-goal to one first half saw the Roosters crow to a 38-point lead at the main break, which they comfortably managed to hold onto despite the Bulldogs’ best efforts. 29 points was the final margin of victory, seeing Centrals bow out after losing just once during the home-and-away rounds. North goes on to meet Woodville-West Torrens in the decider, with the ledger sitting at one win apiece between the two sides in 2020.

20-year-old Mackenzie Slee was recognised as best afield for the victors, returning eight marks and six rebound 50s from his 15 disposals in the back half. Meanwhile, Harrison Magor notched a team-high 23 touches to go with nine clearances, seven inside 50s, and five tackles, forming a formidable midfield partnership alongside Dakota Nixon, who managed 20 disposals, seven clearances, and a goal. Charlie Dowling was another to find the big sticks for North.

In a losing effort, Joey Brown was named the Bulldogs’ best for his 23 disposals and nine marks, while Steve Burton led all comers with 28 touches to go with nine tackles and six clearances. Nicholas Madden racked up nine rebound 50s from defence, with Thomas Graham providing solid cover on the same line. Among those to kick goals were Cooper Dahms and Brett Kennedy (both two), while Lachlan Grubb also got in on the act with one major.

Sturt leant on its finals double chance, bringing an end to the Eagles’ premiership defence while punching its own Under 18s Grand Final ticket in one fell swoop. The Double Blues found themselves trailing at the second and third breaks, but found an extra gear when it mattered. In a remarkable turnaround, Sturt slammed home a total of 4.8 (32) while keeping the Eagles scoreless in a one-sided final term, which saw the ball locked in the victors’ front half. A 30-point final margin was the result, with Norwood awaiting the Blues for what will be a semi final rematch.

AFL Draft bolter and National Combine invitee Malachy Carruthers was again outstanding for Sturt, showcasing all of his class with 21 disposals, six marks, and a goal. Mani Liddy accumulated a team-high 29 touches, which included eight clearances and a booming final term goal, while Tom Powell also managed 29 disposals, 10 marks, seven clearances, and a classy major of his own. Bottom-age forward Morgan Ferres snared two goals from 17 disposals and nine marks, while Will Spain laid 10 tackles, and Crows NGA hopeful James Borlase returned to the level with five marks.

Caleb Poulter was arguably the Eagles’ best in a losing cause, doing his draft chances no harm with 22 disposals and seven marks. Ryan Williams was also recognised for his efforts, while 2021 Port father-son prospect Jase Burgoyne capped off a brilliant year with 21 touches and a goal, with Brock Thomson (31 disposals, 10 rebound 50s) leading all comers from defence.