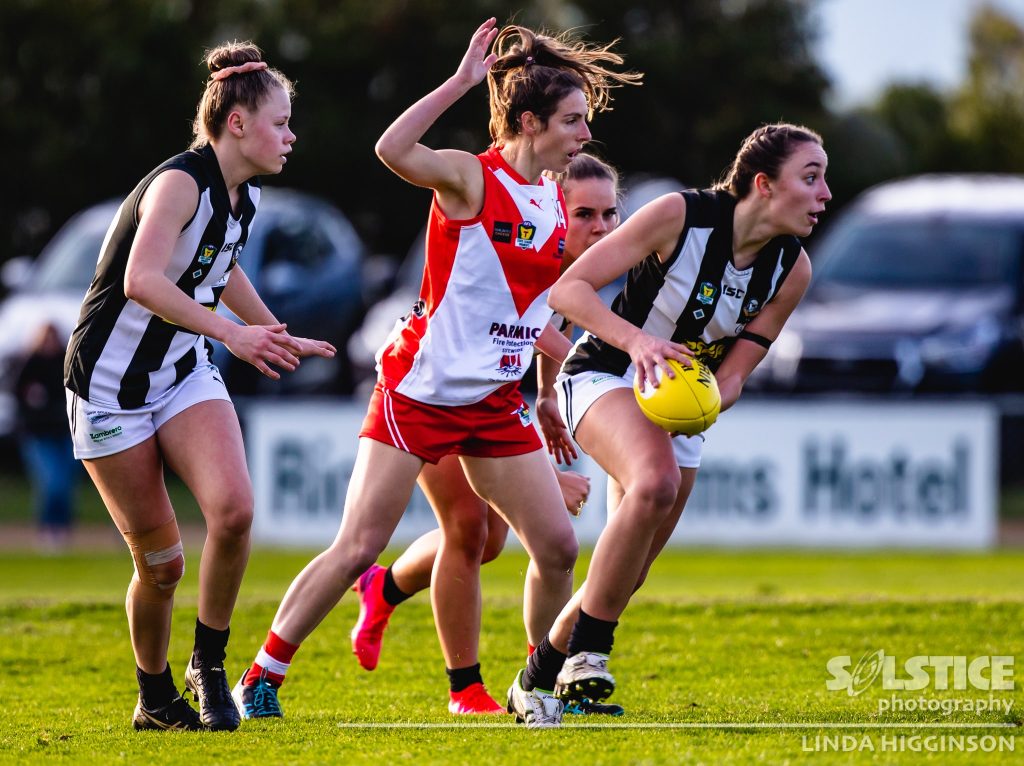 GLENORCHY booked its spot in the Tasmanian State League (TSL) Women’s Grand Final with a thrilling four-point victory over Clarence. The tight second and third semi-final lived up to the hype, whilst minor premiers Launceston got the job done in the other semi-final, defeating fourth placed North Launceston by 43 points.

It was a seesawing clash between the Magpies and Roos with Clarence taking a quarter time lead by six points. In what would become a titanic struggle, the Magpies booted the only goal of the second term to draw within one point, before the Roos kicked the only score of the third quarter – a behind – to lead by two points at the final break. Both teams hit the scoreboard in the final term, with Glenorchy’s two goals to one seeing the Magpies home in a four-point thriller, 4.1 (25) to 3.3 (21).

Tiarna Ford booted two goals and was amongst the best for the Magpies, as Molly Mitchell and Elise Barwick also converted majors. Macklyn Sutcliffe, Perri King and Rebecca Clifton were named amongst the best to send their team into the grand final. For the reigning premiers, Rachel Archer and Natalie Pearce both booted a goal and were named amongst the best as young gun Amy Prokopiec also kicked a major. Megan Harper and Nicole Bresnehan were among the most influential players on the ground for the Roos despite going down in a narrow defeat.

In the other semi-final, Launceston was too good for North Launceston, starting strongly and not looking back. The Blues booted three goals to one in the opening term, before piling on 4.4 to 1.0 to race away to a 34-point advantage at the main break. To North Launceston’s credit, the Bombers actually won the third term by a point as they kicked 1.2 to 1.1, but it would only reduce the deficit to 33 points. Holding their opponents scoreless in the last term, Launceston went on to boot a somewhat inaccurate 1.4, but got up 9.9 (63) to 3.2 (20).

New Roo, Brooke Brown kicked five goals in a best on ground performance for the Blues, as Molly Clark (three goals) and Meg Sinclair (one) were also named amongst the best. Melissa Smith, Georgia Hill and Mia King also stood out in the win as Launceston looked the goods against their northern rivals. For the Bombers, Maggie Cuthbertson and Ella Maurer both kicked goals and were named among the best, as Sophie Farrow also kicked a major. Kartley Broad and India Viney stood out as the top players for North Launceston with the Bombers’ season coming to a close.

Next week Glenorchy will try and make it three consecutive wins against Launceston this season, whilst the Blues will hope it is a case of third time lucky when the teams face off in the 2020 TSL Women’s Grand Final.