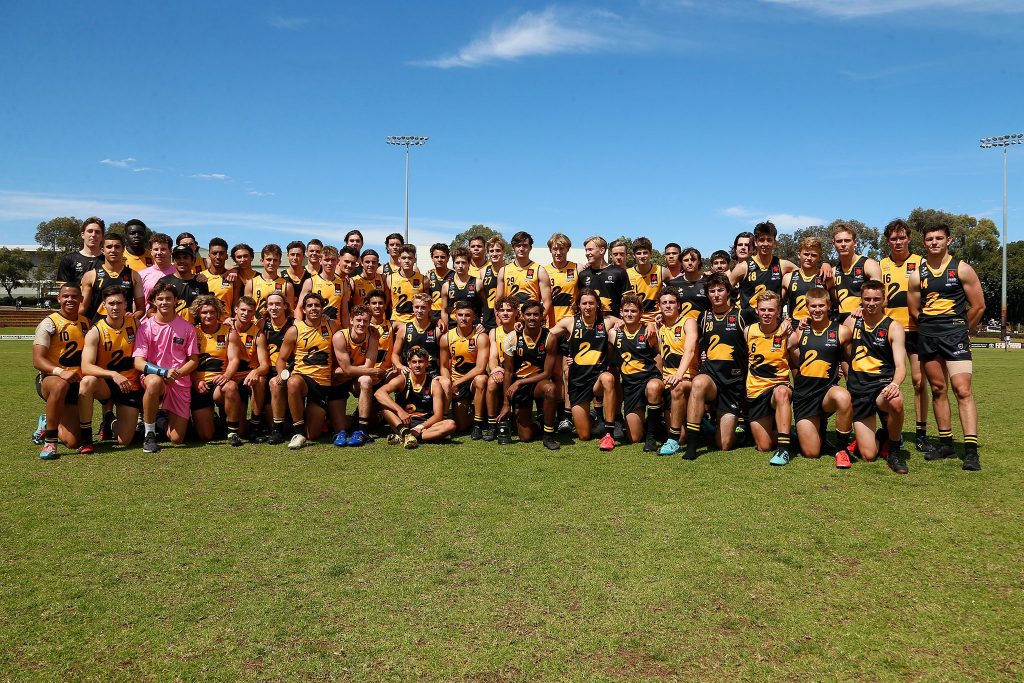 THE 2020 Western Australia Under 18 All-Stars went head-to-head on Saturday, with a bunch of budding AFL Draft prospects boosting their stocks in Game One. Fremantle Next Generation Academy member Joel Western was named best afield as Team Black came up trumps by 55 points. Our scout, Ed Pascoe was on hand to jot down his notes on some of the big performers and familiar names.

A classy display from Winder, who was a standout at the WA combine. In this outing, he showed what he couldn’t at the combine – his football smarts and skills. Despite his side not having a great day on the scoreboard, Winder had a lot of say in the scores they did get. He crafted some lovely kicks to advantage going inside 50 and received one of his own, but his set shot would fall short. One of his better bits of play came in the last quarter, having a run at half-back and starting a chain of handballs which showed of his speed and class. He would unfortunately come off the ground late with an injury.

Trew, along with his fellow midfielders couldn’t really get his side going. While Trew has been a huge disposal winner this year for Swan Districts, he found the going tough. Despite not getting ideal delivery form his rucks, he still managed to get some nice clearances and showed his standout traits with clean hands and creative handballs from stoppages. He was handball happy which he usually does well, but he may look to find a better balance between kicking and handballing, and his kicking could have been tidied up a bit. Nonetheless, Trew’s composure in heavy traffic was impressive, showing nice agility to get around opponents.

Young played a solid game through the midfield, attacking contests hard and using his bigger frame to his advantage to dish out to his running players. A trait that has made Young a well-rounded player is his work-rate around the ground, as he is able to find the ball outside of stoppages unlike most bigger midfielders at junior level. His skills by hand and foot where decent and some of his vision with his kicks inboard where eye-catching. It was great to see Young play so well despite the opposition ruck dominance.

It wasn’t a massive game stats wise by any means from Grainger-Barras, but his impact was always apparent whenever he made a contest. He had an eye-catching play early with a nice spoil, followed by a quick gather of his own spoil to showcase his fantastic agility and nimbleness for a player of 194cm. Another great play was his manic attack to make a contest, running full tilt at the ball and his opponent. Upon gathering, he also laid a nice don’t argue. Some great spoils highlighted his second half but it was an impressive leap and intercept mark in the last quarter which really caught the eye. It has been a fantastic year for Grainger-Barras, who is destined to be taken very high in this year’s draft.

McDonald continued his impressive year with another strong performance up forward, finishing with 15-plus disposals and two goals. He was made to wait until the third quarter for his two goals, however, with one from a free kick and the other from a very nice conversion on the boundary from about 45 metres out. McDonald played more of a centre half-forward role, showcasing his impressive endurance and taking many marks on the wing, while also showing great composure with ball in hand. He was well held by Jaiden Hunter close to goal, but it was McDonald’s work-rate up the ground that proved a handful. This was showcased in the last quarter as he took a mark on one wing, passed inside, and worked to the opposite wing to provide another target – although this time it was spoiled. McDonald finished his campaign on a strong note as he made his claims to be the first player taken in this year’s draft.

Fremantle supporters must be thrilled, but also annoyed that Western keeps impressing and improving his standing in this year’s draft, with the small and nippy midfielder doing what he does best – exploding away from stoppages with his elite speed. Western loved the supply he got in the ruck from fellow Claremont player Kalin Lane and he would always make the most of his clearances, bursting away and driving his side forward. Western would also hit the scoreboard with a nice goal on the run, followed by another from a mark and easy set shot conversion. He could have had even more goals if he were a bit more accurate on the run. His size hasn’t worried him and he plays very similarly to emerging Richmond midfielder Shai Bolton, with his clean hands and speed a real worry for opposition midfielders. He was named best on ground which was certainly deserved.

The 2021 prospect continues to further his standings in next year’s draft with another impressive display through the midfield. The tall midfielder again showcased his impressive work around stoppages and his ability to win the ball seamlessly on the outside, while using the ball well by hand and foot. Johnson shows plenty of composure with ball in hand and is never flustered. Another thing he does well is block for his teammates after giving a handball, to further put his teammates in better positions. His best bit of play came in the last quarter where he showed great agility to get around two opponents 30 metres out form goal, before slotting a lovely major on his opposite foot.

It was another classy display from Chapman down back, where he showcased his ability to intercept and use the ball well from defence. He took numerous intercept marks and after the one he did drop, he did really well to quickly gather the loose ball by attacking it hard and making sure he made up for his mistake. Chapman’s attacking flair is his best trait but he also showed his strong defensive game as well in the second quarter, punching a nice spoil and then nailing his opponent with a strong tackle near the boundary. Chapman has firmed into top 20 calculations in this year’s draft and this game only helped confirm his talent.

A brilliant game from Lane who was the standout ruckman on the ground, giving his midfield first use and particularly forming a good partnership with fellow Claremont Tiger, Joel Western. His competitiveness to go with his hitout work was really impressive, as he took numerous strong marks around the ground and was more than willing to tackle once he had competed in a ruck contest. Perhaps his most eye-catching movement came in the second quarter when he managed to nail the elusive Denver Grainger-Barras with a strong tackle, which would lead to his side kicking a goal.

It wasn’t a big day for Neale, who played mostly forward for Team Black with Kalin Lane getting the major ruck duties. Neale did some nice things forward without hitting the scoreboard himself, with a nice smother close to goal and numerous leaps at the ball to kill contests. His best work came when he was able to move into the ruck, where he was more involved with some nice taps and follow up work once the ball hit the ground. He will need to push up the ground more as a forward and really showcase his endurance as a former runner.

Featured Image: The 2020 WA Under 18 All-Stars post-match | Retrieved from: @WAFLOfficial