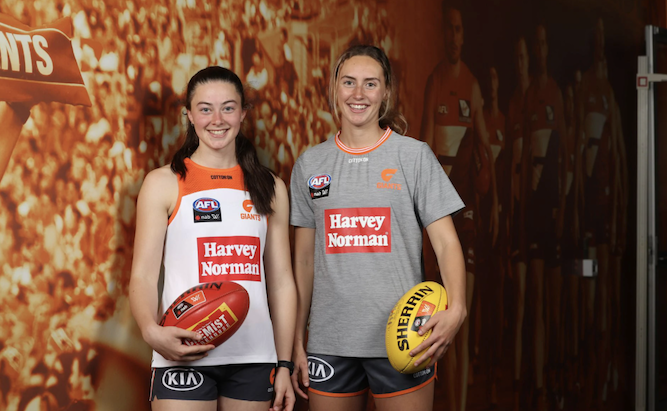 NOW the AFL Women’s Draft is over, we take a look at each club, who they picked and what they might offer to their team next year. We continue our countdown with GWS GIANTS, a team that showed great potential in 2020, and was able to add a couple of terrific junior talents and a train-on player from the season.

Having just the three selections in the AFL Women’s Draft, the GIANTS were able to handpick their choices by having a monopoly on the New South Wales group. They picked a couple of highly-rated teenagers out of AFL Canberra in Tarni Evans and Emily Pease, as well as the experienced Libby Graham who was a train-on player for the GIANTS in 2020, coming out of Manly Warringah Wolves.

First selection Evans comes out of Queanbeyan Tigers and is a member of the AFL Women’s Academy. A taller forward who can roll through the midfield, Evans moved from Tathra to the nation’s capital in order to test herself in a stronger league. She did just that and she could see plenty of footy in 2021. Likely to start forward and then develop into a genuine utility across the field, she will be a clever forward option for the GIANTS to kick to.

Joining her was fellow AFL Women’s Academy member and AFL Canberra representative, Emily Pease. Both Pease and Evans are former athletic talents, and whilst Pease is a little smaller, she can play through midfielder or off half-back. She is able to provide that run and drive out of the defensive 50 and add a bit of spark to the GIANTS starting side, and will no doubt push for a spot over the summer.

The final selection of Graham was one that rewarded her for her commitment during the 2020 season as a train-on partner and then stepped up for the Wolves in the AFL Sydney Women’s competition. She also plays off half-back, with a bit of added experience as a readymade defender who can step up straight away and slot into the outfit.

The GIANTS had a relatively quiet off-season, but also brought in Katherine Smith from the Demons, so have bolstered their defensive stocks, as well as adding some young class to the line-up in what could be a big 2021.