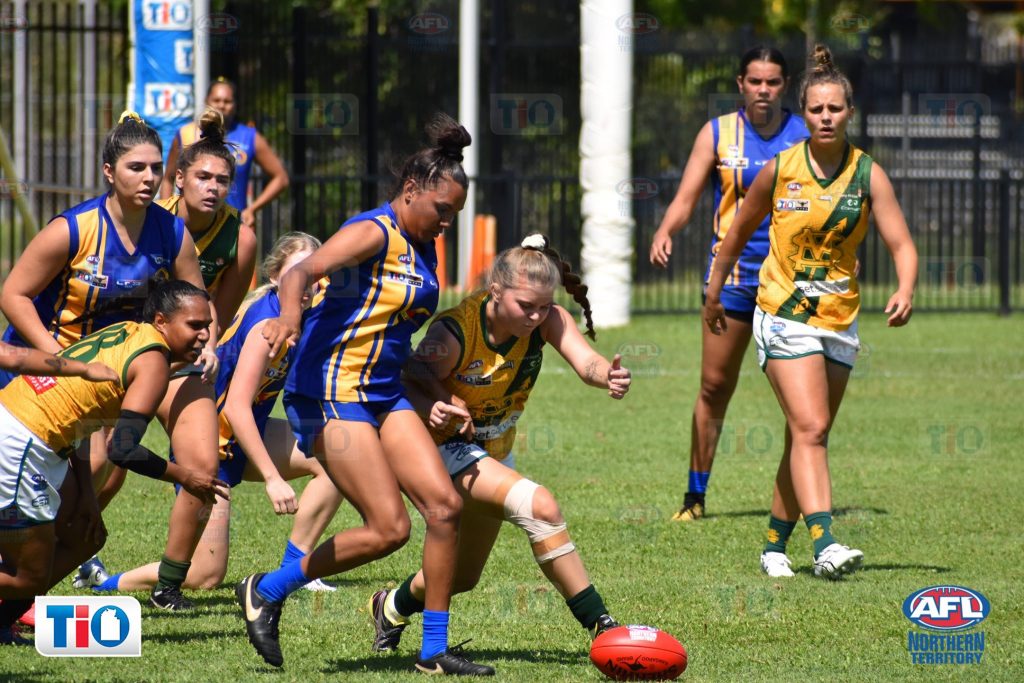 ROUND 2 of the 2020/21 NTFL Women’s competition is set to see some intriguing battles, with Darwin Buffettes entering the competition for the first time this season after a bye to open their campaign, while Palmerston Magpies will take this week off to regroup after a disappointing and disjointed start to the season. The top four teams will all go head-to-head with a battle between Nightcliff and Waratah, and Pint and St Mary’s to follow.  Meanwhile, Southern Districts will look to overturn a sloppy start when they take on the Buffs and Tracy Village will take on the Wanderers sitting in fifth.

A huge top two clash opens the day’s proceedings, with both Waratah and Nightcliff looking to back up strong showings after last round. Whilst Nightcliff sits comfortable atop the ladder with a huge 108-point margin last week, Waratah will be feeling less than comfortable only having played a half against Palmerston before the match was called off. Waratah booted five goals in a strong second quarter showing, however Nightcliff matched that easily with five goals scored in the third quarter alone and four in the second and fourth quarters to run away with the huge victory. That being said, Nightcliff will come up against an arguably stronger side than their Round 1 opposition in Tracy Village, so will need to ensure their backline holds up well against Waratah’s expanse of viable goalkickers. Emma-Lou Wolsey (five goals) and Darcy Elliston (four goals) were the real firepower last round so expect the Tigers forward to be in the drivers seat once more, while Eliza Morrison and Mickayla Ward were both named in the best. For Waratah, Caitlin Couch was the lone multiple goalkicker last round in her first outing at the club.

The second match of the round will see two first round losers go head-to-head, with significantly different ladder positions all that realistically separates the two sides. While Wanderers suffered a 63-point loss against St Mary’s, the Razorbacks could not contend with Nightcliff and failed to really hit the scoreboard. The main difference between these two sides is the work rate in the second half last week, with Tracy Village conceding nine goals and failing to score after the final change. While the Wanderers conceded five in the third quarter to a runaway St Mary’s outfit, they booted two goals back and only allowed the Saints to kick one major in the final term with a much better defensive effort stemming the flow. Kaitlyn Armstrong was the lone goalkicker last round for the Wanderers, making her a huge target this round while the likes of Deanna Peckham and Sophie Armitstead were also named among the best. For the Razorbacks, there is really no other way to go than up, with solid performances from Meagan Wylie, Sarah Wilson and Zhoe Clark showcasing some of their skill, just needing to finetune it.

Another battle of Round 1 victors, this is one of the intriguing matches of the round given the changes made over the off-season. While Pint were mildly successful last season, bumped out of the semi finals after finishing sixth, St Mary’s finished in eighth but ultimately have a new-look team this season with a number of new recruits from down south. Both coming away with excellent wins last round – with Pint’s coming against the reigning premiers, Southern Districts – and conceding a combined 3.5 across the two matches, this match will be a real test given they clearly have the scoring ability but could have come away with even bigger victories if not for patches of inaccuracy. Amy Chittick and Jacqueline Downey booted two goals apiece for the Queen Ants, backed up by four individual goalkickers and Jacinta Reid and Katie Streader finding the ball with ease, while for the Saints it was Michaela Long (four goals) and Ash Melnikas (three) who heaped on the offensive pressure. Alongside the aforementioned duo, Claudia Whitfort booted two to be named in the best among some exciting talent.

Darwin Buffettes enter the round at the bottom of the ladder but with a completely clean slate given they had an extra week on the sidelines. The Crocs, on the other hand, frankly had a rough start to the season and will want to rectify that immediately – but will need to watch the Buffs who have a heap of firepower that will be itching to have an impact. Booting just one goal last round, with a heap of names who can have a huge influence on the scoreboard, the Crocs will need to be far cleaner around the ground and make the most of their forward 50 entries. Megan Craufurd was the lone goalkicker in the Crocs camp last round, named in the best among the likes of Essie Grose and Malory Nankervis. For the Buffettes, Machaelia Roberts was hugely impactful last season before heading down to Melbourne for the AFL Women’s season, nabbed by Collingwood in the 2019 draft, while young gun Dominique Carbone and Kylie Duggan were two of the most consistent players last season making for an intriguing battle. In what is a rematch of their 2019/20 semi final, expect both teams to come out with something to prove here.