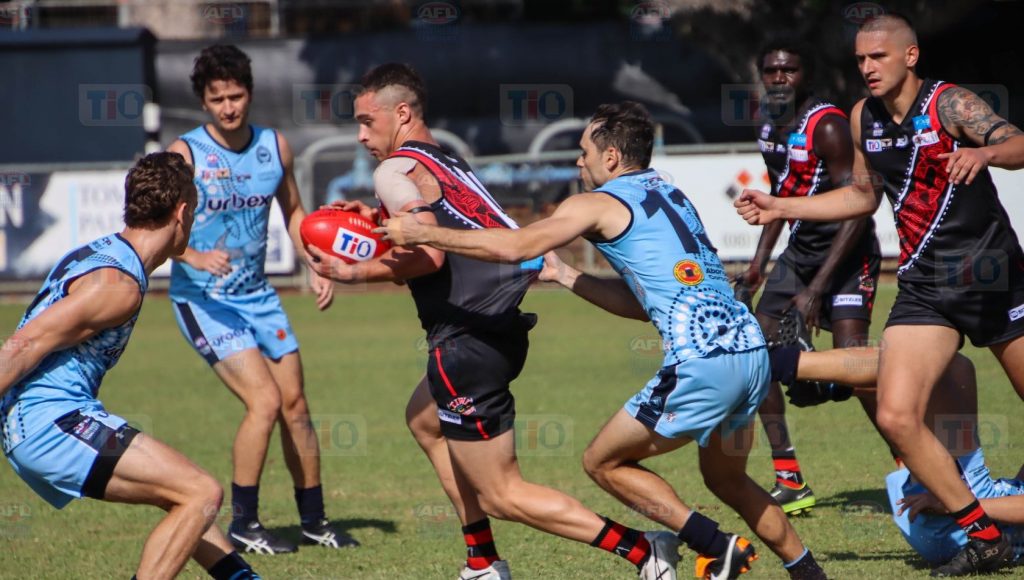 AFTER an action-packed weekend to kick off the season, the 2020/21 Northern Territory Football League (NTFL) Men’s Premier League rolls on into Round 2. All four games are set to be played on what shapes up as a super Saturday of football, headlined by a TIO Stadium triple-header. The first ball bounces down as Palmerston takes on Tiwi, while Nightcliff is the only true host as it welcomes Waratah to Nightcliff Oval.

Both Palmerston and Tiwi will be out to rectify Round 1 losses, when they do battle at TIO Stadium in the weekend’s opening fixture. The Magpies were soundly trumped by Waratah last time out, while Tiwi was outlasted by Darwin in a high-scoring shootout. The combined losing margin between the teams in Round 1 was 133 points, so suffice to say, there is plenty of room for improvement either way.

Magpies recruit Daniel Stafford will hope for a far more fruitful outing this time around, having been held to three disposals and a goal against Waratah. Support comes from Nigel Lockyer Jnr, who is fresh off a four-goal haul, while bigman Matthew Dennis will again look to supply Chris Williams with a bunch of opportunities at the stoppages. The midfield battle will be key to any Palmerston success; taking some heat off young defenders in Sandy Brock and Tyrrell Lui, while also providing the dangerous Magpies forwards with quick and favourable entries.

Tiwi’s pace and fluent movement could cause some headaches in transition, with the Bombers’ losing score of 94 from last week still a better effort than what half the other teams managed. Victorian recruits Nathan Scagliarini and Angus Byrne have already shown they’ll be terrific additions to the side, while Mason Dewit was also handy down back in his NTFL debut. The likes of Harley Puruntatameri, Henry Kerinaiua, and John Tipiloura will all need to provide their usual spark going forward, with the Bombers’ wide range of goal sources somewhat depleted compared to last season.

Expect a close contest in this one, with both sides out to notch their first win of the season. Palmerston will understand the importance of getting on the board early, but may need some time to gel having taken in a number of key recruits. The Bombers stand as a fearsome test.

Two-time reigning premier Nightcliff meets fellow Round 1 victor, Waratah on home turf this Saturday, as both sides look to carry on their winning form. As they often do, the Tigers sent a resounding statement to the rest of the competition in their defeat of St Mary’s in last week’s Grand Final rematch, with the usual suspects combining well alongside a range of fresh faces. Waratah also earned a stylish win in the season’s curtain-raiser, thumping Palmerston under the new Gardens Oval lights on Friday night.

The hardness and maturity of Nightcliff’s side continues to shine through, with the likes of Daniel Bowles, Cam Ilett, and Brodie Filo all finding plenty of the ball last week. Dominic Brew‘s 17 disposals, 13 tackles, and seven clearances were also mighty impressive, with the Tigers’ midfield depth and versatility a tough match for any team. Combine that with the sturdiness of Nathan Brown down back, and the goal threat of Liam Holt-Fitz, Kyle Emery, and Matthew Bricknell up forward, and you have a well-balanced unit which boasts a range of weapons.

Waratah’s Ned Stevens is coming off a performance which earned him a Rising Star nod, competing well against Dennis, Palmerston’s established ruckman. He’ll have more of a rotation to face this time out alongside Zach Westerberg. At their feet, the likes of Sam Godden, Dylan Collis, and Joshua Carmichael should provide good forward drive against stiff opposition, along with usual suspect, Abe Ankers. Jae McGrath has proven again that he is able to spearhead the attack, with Brodie Carroll, Tom Fields, and Kim Kantilla all capable of hitting the scoreboard, too.

After such a promising season initiation last week, a true test of Waratah’s credentials will come against the competition’s benchmark. Nightcliff seldom puts in a bad performance, so the Warriors will have to be at their best to outdo the reigning premiers and remain undefeated.

Darwin proved many a doubter wrong in Round 1, and will look to continue that trend heading into its Saturday evening clash with Southern Districts. The Double Blues stormed away to a 64-point romping over Tiwi, while the Crocs slumped to a narrow four-point loss at the hands of Wanderers. The two sides last met in week one of last year’s finals series, with Districts getting the better of the Buffs on that occasion to the tune of 71 points. But a lot has changed since then and there will be a decent personnel turnover coming into this battle.

Experienced heads in Jarrod Stokes and Matt Campbell continue to serve their Darwin side well along with the returning figure of Brodie Foster, who comes in fresh off a six-goal haul. Ishmael Palmer and Joey Collinson were others to showcase Darwin’s scoring prowess in last week’s effort, with good potential to carry on such form agains the Crocs. Districts have lost some of that firepower and only managed six goals last week, but can rely on the likes of Lionel Ogden and Dean Staunton to drive standards. Billy Rolfe also snared half of his side’s total goals in Round 1, so will have a big role to play once again.

It’d be easy to turn on the Crocs after a disappointing Round 1 result, though Wanderers look a much-improved side and only just got the better of them. Darwin has been a notoriously hot started over the last few seasons, so will hope that trend continues here in what should be a cracking contest.

Season 2019/20 Grand Finalist St Mary’s readies for battle with Wanderers, looking to get on the board in the new campaign. The Saints were again outdone by Nightcliff in their opening game, while a revamped Wanderers snuck home by four points over Southern Districts. A perfect start to 2020/21 is up for grabs for the Muk Muks given the stiff opposition they’ve faced, with St Mary’s hoping it doesn’t fall too far behind the leading pack early on.

Star Victorian recruits Shaun Mannagh and Brodie Newman were terrific last time out for Wanderers, while familiar faces in Braedon McLean and Brett Eddy will hope to continue their leading of the side. Goals were hard to come by against Districts, but the likes of Brayden Culhane and Shane Thorne should again be thereabouts for the Eagles. The Saints were another side to only manage six goals in Round 1, with the likes of Nate Paredes and Shaun Edwards having to contribute from midfield. The returning Jackson Paine started strongly, while fellow bigman Brandyn Grenfell will again look to impact.

Wanderers is a side on the rise and will have to work hard to get the most out of a couple of tough early-season assignments. St Mary’s will be hungry to hit back hard after last week and have the cattle to do so, led by some experienced campaigners.