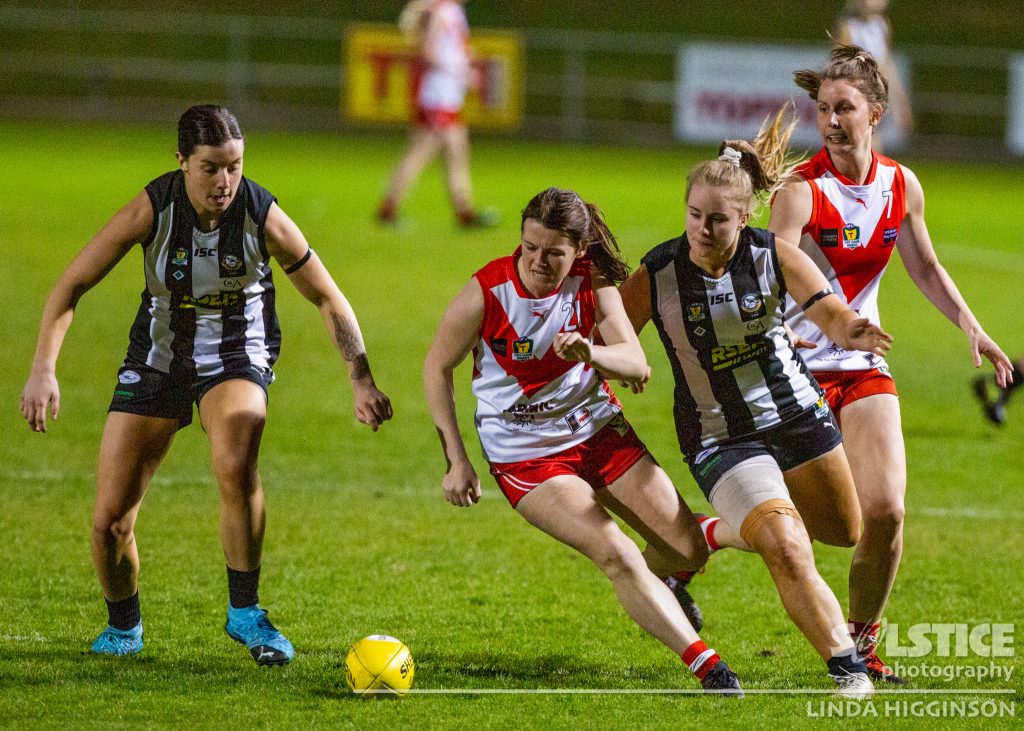 THERE is no turning back for any of the four Tasmanian State League (TSL) Women’s sides when the four finalists battle it out in two do-or-die semi-finals. Last year’s runners-up Launceston host the fourth placed North Launceston at Windsor Park, before the classic contest between big improvers Glenorchy and reigning premiers Clarence.

The Magpies have knocked off Launceston twice this season, a feat that they did not manage to achieve last season – nor did anyone until the grand final – and now must overcome a 0-2 head-to-head in 2020 against the Roos to book a spot in the TSL Women’s Grand Final. It will be a tough game to pick with Glenorchy snatching the home ground advantage with a massive 63-point win over North Launceston in the final round, so now the sides will play out at Abbotsfield Park.

Fresh off her leading goalkicker title, Sarah Skinner (18 goals) will be one the Roos need to contain, whilst up the other end, second placed Jessie Williams (17) is a key component of Clarence’s attack. She is one of three players inside the top five for goals however, with Jacinta Limbrick (12) and Amy Edmand (nine) up there, as is Magpies’ Molly Mitchell (nine).

Skinner has been an outstanding force this season for the black and whites, with Zoie Crawford the other one who has caught the eye of coaches, named among the best on seven occasions each. Young talent Jemma Webster has also had a great year, whilst former AFLW player Libby Haines has rebounded strongly through the league.

For the Roos, Nicole Bresnehan provides much-needed experience in the red and white, whilst the likes of Bronte Scott, Limbrick, Amy Prokopiec and Brianna Oates have all had some strong season, with the latter ones impressing beyond their years. Clarence start favourites in this clash given their 2-0 head-to-head record, but expect Glenorchy to bring the heat because the Magpies would back themselves in the decider against Launceston.

Speaking of Launceston, they are heavy favourites to roll through to another grand final when they come up against North Launceston. The Bombers pushed them in the opening round of the season, but have only managed the two wins – both against the winless Tigers – whilst Launceston has only lost to Glenorchy this year. The Blues grabbed the all-important top spot as the top three in the five-team competition were so even, and now have a chance to build some confidence.

Daria Bannister is third overall for goals with 13 this season, and has been amongst the Blues’ top performers throughout 2020. Launceston tend to share the goals around with recently drafted North Melbourne forward Brooke Brown (five goals), Angela Dickson (four) and Meg Sinclair (four). Bannister’s fellow AFL Women’s teammate Mia King has also found herself in the bests on five occasions, with Dickson, Camilla Taylor and Kelsie Hill all making it in four times.

There is no doubt the game is an uphill battle for North Launceston, but the Bombers have nothing to lose, and the likes of Zoe Bourne (five bests), Maggie Cuthbertson (four), Ruby Slater (four), Jodie Clifford (four) and Kayla Sheehan (four) will not shy away from a challenge. They have struggled to score against the big three teams, and will need to conquer that to have a huge upset, but finals footy is a different ball game.