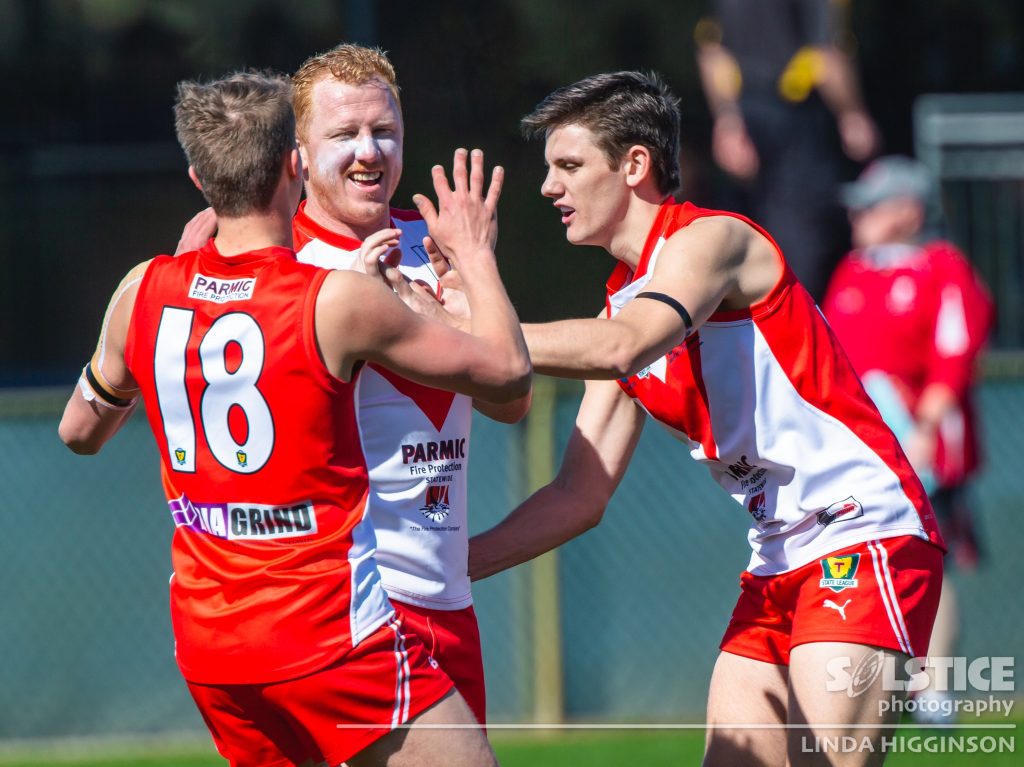 ROUND 13 of the Tasmanian State League (TSL) saw some exciting players set the field alight and showcase their talents for their respective sides as Clarence won and Tiger lost for the former to secure a finals spot in the last round of the regular season.

Clarence locked up fourth spot and guaranteed the Roos finals thanks to a tight 11-point victory over North Hobart in a battle of the sides with an abundance of youth.

Clarence led at each change but it was by a kick of less at the breaks, holding a two-point, one-point and six-point lead at the first, second and third breaks. An inaccurate 1.5 in the final term extended the final margin out to 11, but they never entirely looked safe in the 9.12 (66) to 8.7 (55) victory.

Chris Nield was a standout coming back into the side kicking two goals, while Jason Bailey and Josh Green also kicked a couple each. Baker Smith was named his team’s best-on for his work in defence, with others youngsters Sam Banks and Oliver Davis also among the Roos’ best. For the Demons, Julian Dobosz, Angus Norton and Jye Menzie all kicked multiple goals, as Hugh Williams, Thomas Reeves and Jayden Charlton were named among the best.

Davis had a strong game through the midfield for Clarence. The slippery conditions made the match very congested, and this is a style of football that suits Davis well. He played predominantly on the inside where he gave some good handballs under pressure and laid some aggressive tackles. Davis won numerous contested possessions throughout the day and earned multiple free kicks by getting to the ball first and putting his head over it.

Banks showed that he has good skills and athleticism with some nice link-up play out of the defensive half on Saturday. His kicking was a highlight, as teammates continually looked to get the ball in his hands and he found short targets on a consistent basis. Banks has a fantastic work rate, as he always followed up his kicks and attempted to earn another possession in the same passage of play. A couple of times he did appear rushed under pressure, but this is understandable given that he is a young player. With more experience at League level, he should be able to find a bit more of the ball on the inside which will compliment his outside game beautifully.

Holmes played a solid game as a key forward for the Roos. Early in the game, he linked up well down the wings and applied good body pressure with blocks and shepherds to create space for teammates. He took a strong one-on-one mark in the second quarter to earn a shot for goal, but unfortunately his kick was touched by the man on the mark. Holmes redeemed himself with a nice snap goal in the third term. He also showed some decent agility, particularly when he laid a chase down tackle to win a holding the ball decision in the third quarter.

Gardner was very impressive for Clarence in the midfield and as a half-forward. The under-ager displayed some brilliant work on the inside, highlighted by a burst through the middle of a stoppage to win a clearance in the second term. Gardner rarely fumbled, was clever with his hands and linked up very nicely with teammates through the middle of the ground. He often provided a lead-up option for teammates and initiated switches of play as well. Despite being smaller than most of his opponents, Gardner is a great competitor and is not afraid to compete against the bigger bodies, which was demonstrated when he laid a good tackle to win a holding the ball decision in second term. He also displayed some fantastic forward craft when he kicked a clever goal in the third term by side-stepping two opponents and then drilling the drop punt from about 35 metres out. Gardner played a pivotal role in his side’s 11-point victory.

Smith showed some fantastic signs on Saturday. Although he misread the flight of the ball a couple of times early, his performance from the second quarter onwards was outstanding. He took numerous intercept marks by dropping into holes and reading the leads of opposition forwards. Smith has great length, so he can cover lots of ground and is a reliable mark. Once he had the ball, the bottom-ager always looked for runners coming past to create some fast ball movement coming out of defence. Smith’s kicking was reliable too, particularly when he went short and switched the play.

Collins was one of North Hobart’s most reliable defenders on Saturday. He took numerous intercept marks in the defensive 50 by reading the play well, floating in front of leading forwards and using his strong hands. In the first quarter, Collins linked up with teammates across the wings to control possession and set up a goal with a nice long kick inside 50. Throughout the game he spread from defence well, rarely fumbled, hit most of his targets by foot and created a running option when his side was moving the ball forward. He had a great moment in third term where he pushed off his opponent, took an intercept mark, used pace to break away and then found a teammate with a beautifully weighted kick through the corridor. This led to an important goal and demonstrated how damaging Collins can be when he gets the ball in dangerous positions.

Menzie kicked two goals on Saturday and showed some other good signs. He applied strong pressure on the opposition and regularly got into good positions to crumb marking contests. His ability to make something out of nothing was evident, particularly when he almost kicked an amazing goal with some soccer skills in second term. He pushed up the ground to collect touches and link-up with teammates whenever necessary, but he mostly played as a deep forward. Other highlights of his game were a brilliant run down tackle in second quarter that won a holding the ball decision and led to a goal, and an impressive overhead mark on the lead in third term.

An eight goals to none blitz in the first quarter set off a thumping win to the North Launceston Bombers as they finished on top of the ladder to claim the minor premiership as they look to continue their form into the final series.

It was a convincing performance from the Bombers with a wealth of players popping up and hitting the scoreboard in big way with multiple goals coming from Zachary Burt (four), Jack Rushton (three), Jack Avent (three), Bradley Cox-Goodyer (two), Taylor Whitford (two), William Edmunds (one goal), Sherrin Egger (one goal), and Ollie Sanders (one goal) all contributing to the 17.11(113) to 3.7(25) win.

Despite trailing by 12 goals at the last break Glenorchy did their best to make much of a contest in the fourth quarter but it was too little too as they only managed one goal in that term as they went down by 88 points.

Put in a terrific game right from the outset, although his first quarter was quiet he showed glimpses of what he was going to do all day when he linked up the play collecting a ground ball and lowering his eyes to hit a target inside 50. He was all over the ground often moving to the wing where he showed his calmness and agility when he collected a bouncing ball from an awkward bounce and weaved his way out of a tackle. He also made his way to defence to help the defenders out, showcasing he has a good football brain when he switched the play which led to an attacking play. But wherever he went he always seemed to get his hands on the pill often handballing it to create a link-up play or hitting targets lace out into space. He was often the starter of the attacking movements.

He was a pretty quiet which was evident of North Launceston dominating all day on the park and on the scoreboard, but he did try to make things happen for Glenorchy, as he often went up for marks and went further upfield to help out in defence where he got most of his possessions. Despite not getting on the scoreboard, it should be noted that his second efforts were some of his biggest traits in the 88-point defeat. This was evident when dropped a mark (albeit a relatively hard one but got his hands on it nonetheless) but went to ground to try and reclaim the ball and created a contest out of it. He was lively in the last quarter when Glenorchy started to play with more fluency, he nearly had a goal to his name but was rushed by a North Launceston player, however, that alone should be encouraging for the full-forward as he found time and space (which he did not have for majority of the game) to get a shot away as he got the defenders off guard and finally got good service to him.

In the battle between two more experienced sides, and Tigers needing a big win – and the Roos to lose – in order to make finals,- Lauderdale just got the job done and held firm to win by three points.

Tigers led at each break and looked likely to cause and upset throughout the contest, taking a four, seven and nine-point lead into each quarter, winning the first three terms. Unfortunately for the visitors, they could only score two behinds in the final quarter as Lauderdale booted 2.2 to snatch victory from the jaws of defeat and win 8.13 (61) to 8.10 (58)

Harry Richmond slotted four goals for the Bombers – including the matchwinner midway through the final term, as he was named among the best with Luke Nelson (two goals) and Josh McGuinness (one). Sam Siggins and Nathan Oakes also stood out for Lauderdale, as Toutea Havea was the other solitary goalkicker in the match. For Tigers, Oliver Burrows-Cheng (two goals) was the only multiple goalkicker as he, Kieren Lovell (one), Luke Graham (one), Marcus Davies (one) and William Campbell were all steadfast in defeat.