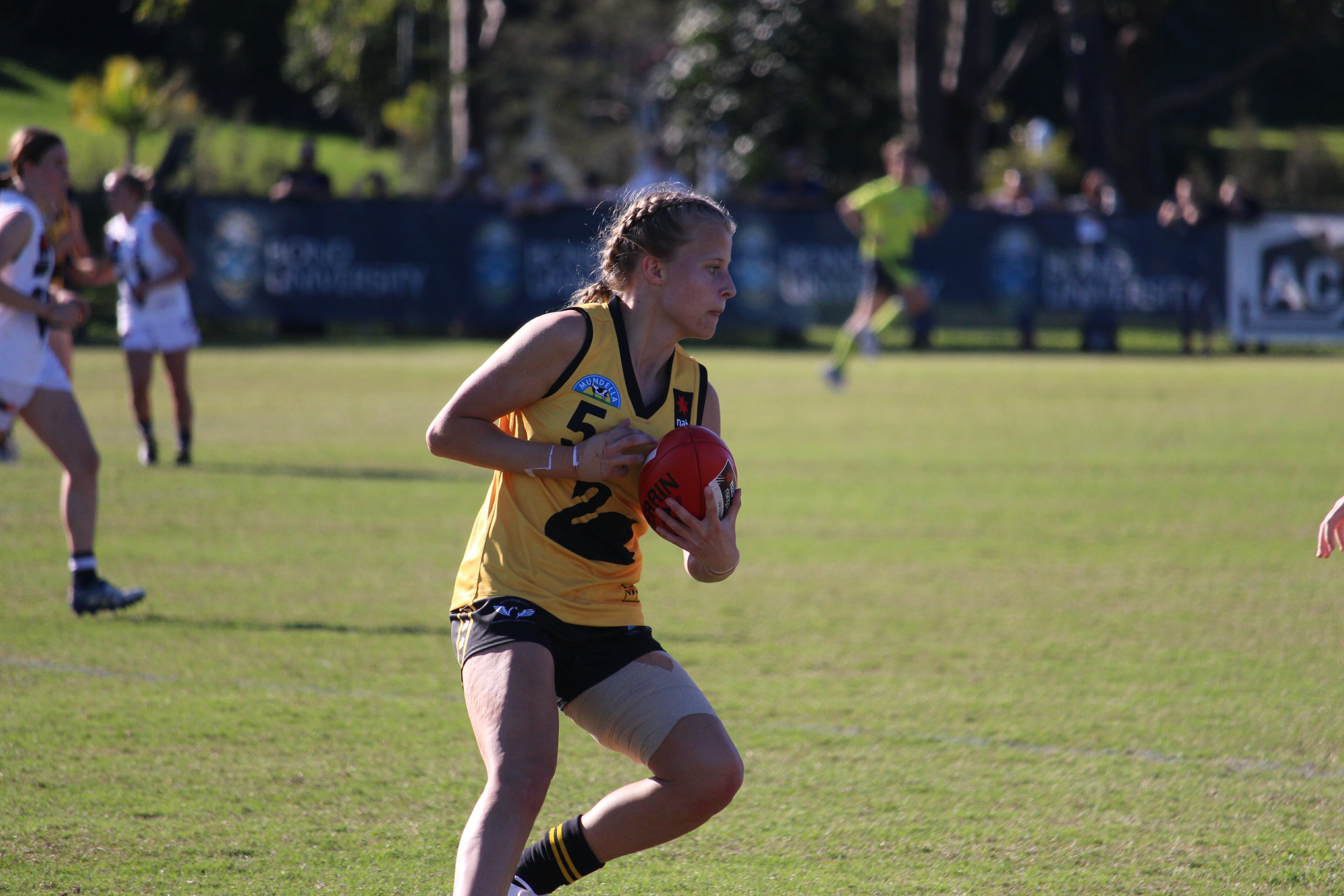 MODELLING her game off Collingwood excitement machine Jamie Elliott, Western Australia product Mikayla Hyde draws a lot of similarities between the way she plies her trade on the footy field and that of Elliott. Having pushed into the midfield this year, Hyde noted the evolution of her game from being a forward to a player that can rotate through and have an influence.

“I’ve always been a Jamie Elliott fan. When I watched him I always saw that he was playing forward, before AFLW was even a thing I was always like ‘I want to kick goals like he did’. And then it’s actually funny he moved into the midfield this year, for Collingwood and I also played midfield mostly this year for Swan Districts,” Hyde said.

Drawing inspiration from Elliott from a men’s footy perspective, Hyde also highlighted the work of former Calder Cannons star and current St Kilda player Georgia Patrikios who is renowned for her cleanliness, coverage of the ground and sheer star power.

“In the female side of things probably a player like Georgia Patrikios. I think she is so clean and is a pretty tough midfielder as well. I would like to play exactly like her, I do like to model my game around someone like her.”

Dissimilar to her twin sister Brianna who supports Richmond, Hyde has been a lifelong Pies fan, so much so she made the trek over to the MCG for the 2018 Grand Final between Collingwood and her home state side, West Coast Eagles. Not getting the desired outcome – a Collingwood premiership – the youngster not only had to deal with the loss but so too the venture home.

“Went to the grand final in 2018 and I can confirm that I did lose a few tears after we lost,” Hyde admitted. “Fly over there and then fly home with all the Eagles supporters but we still wore Collingwood stuff because you know, we’re loyal.”

In terms of her own journey, Hyde made mention that it was the influence of her father and brothers that really prompted her love affair with the game and made her hungry to take the field.

“Probably mostly to do with dad, he’s a Collingwood supporter and so am I and we kind of just grew up watching it with him,” she explained. “Both our brothers played footy and we kind of watched them. We didn’t play until about Year 6 in our primary school team with the boys. And then after that we wanted to keep playing but mum wouldn’t let us because we didn’t know there was girls teams out there, and eventually we found girls teams and joined Swan Districts.”

“I played school footy and that led to like an All-Stars game, and we were on the Swan Districts side because that was the closest WAFL club to our house. Then from there the girls that were coaching actually played for Swans and then invited us to come down to the youth girls team,” Hyde said.

When speaking about the moment that she was identified and chosen to join the ranks at Swan Districts, Hyde reminisced on how important it was for her to be able to take the footy field with a group of girls and really get an opportunity to show what she is made of.

“Yeah, it was so good, I was with Mikayla Bowen at the same time, and we wanted to play for so long and mum just kept saying no, she wouldn’t let us play with the boys. So to know it was an actual girls team and actually play was so cool.”

Having grown up watching a lot of footy, Hyde identified that one of her most damaging attributes on the footy field is her ability to read the play and see the patterns unfold. When it comes to areas to improve on, the 18-year-old wants to “develop (her) contested ball on the floor, just being a little bit cleaner”.

Representing Western Australia in 2019, Hyde touched on what an amazing experience it was and the stark differences between playing in that competition and the WAFL Women’s, having to contend with much bigger bodies.

“Yeah it was insane, and the girls that you play with make it even better. When you’re over there you meet girls from eastern states, and that’s even cooler too, I’ve got so many mates up in Queensland and in Victoria. Such a good experience overall.”

“I think it is just body size that you verse, like we verse some pretty big girls. I’m not a huge human as it is,” she joked. “So versing the huge girls in the WAFLW, avoiding contact is harder to take but I got used to it, in the second year of league I got used to the harder hits where at states you can kind of use it to be stronger on the field and take on people and take on tackles.”

In her short career so far, Hyde has had some pretty momentous occasions, not only playing in a grand final but winning the premiership and some added silverware in the form of a best on ground.

“Probably 2017 when Swan Districts went back-to-back to back on the same day, our youth girls, reserves and league had all won the premiership and then I snagged best on ground so I was stoked with that,” she said. “But to win a premiership was good.”

“I was actually really surprised because the microphone cut out, and then someone must have heard it was my name and my mates were trying to tell me get up, and I was like no way, I was not expecting it at all but it was cool.”

Swan Districts has been a part of Hyde’s life for a long time, with the youngster crediting the work of the club for ensuring that women’s football is viable for all girls through their inclusivity and commitment to the program.

“I think we’re such a tight unit like from what people see, externally it’s nothing to what is in between the four walls like, especially we’re the only club in – definitely in WA that has their own female change rooms like the WAFL club. So that just shows that our clubs really care for our females. All of our coaches are always so supportive and we’re a really diverse club as well, we accept everyone,” she explained.

In terms of coaches and people at the club who have had an influence on the 18-year-old, it was hard for her to go past Kara Antonio, crediting the Fremantle captain for her progression, confidence to take the game on and general development as a player.

“Definitely Kara Antonio last year at least, really helped like guided me through on how I could make it all the way up and she still to this day has always been there for me and stuff like that so I’d definitely say Kara Antonio.”

A day out from the draft, Hyde hopes to “end up on an AFLW list” stating that “anyone that would take me I will be there”.