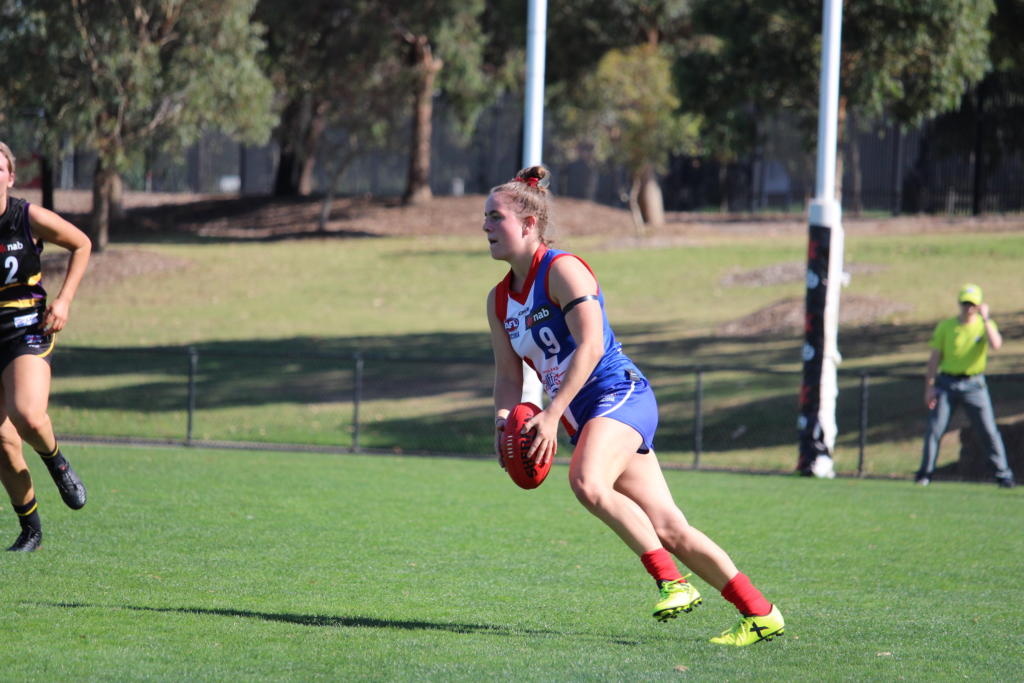 IT has been disappointing year for most Victorian footballers, with few getting a chance to really test themselves competitively. In most cases for the AFL Women’s Draft Combine invites they have been able to get out on the field and stake their case to be drafted in tomorrow’s 2020 AFL Women’s Draft. Unfortunately for players such as former Gippsland Power and Hawthorn VFL Women’s talent Maddi Shaw, she has not been able to get on the park due to the COVID-19 global pandemic.

Shaw is an over-age prospect who missed out on being picked up in last year’s draft, admitting she was “not ready” to make the next step up to the elite level. But with a big preseason behind her she hoped to be prepared to tackle 2020 in a huge way.

“My plan was to do really, really well in preseason,” Shaw said. “So I really worked quite hard in preseason, really wanted to better myself because I knew last year I was not ready at all. “I was like ‘this year I need to get myself ready’ and become one of those better footballers and make sure I was training really hard, and then coming into the season at my peak. “Making sure I was fitter than I’ve ever been, stronger than I’ve ever been. “But also physically and mentally ready as I’d already had that season to prepare myself and I knew what I was looking forward to.”

It was her first proper full uninterrupted preseasons and her hope to kick-start the year off in style was positive. Despite missing out on being drafted, Shaw said she did not want to look too far ahead other than to have it as a long-term goal, and rather focus on the here and now.

“(I wanted to) just make sure I had a really good preseason, as the last few preseasons I had interruptions and I went to Cambodia, not that that’s an excuse to not be fit, but just making sure I was really prepared and then going into it knowing I was playing for Hawthorn and not aiming for anything other than where I was now and doing my best on each weekend and then looking to the future as it came closer, so trying to work in the moment,” she said.

Her transition from the Power at NAB League Girls level to the VFL Women’s has been a great learning curve, with Shaw getting the opportunity to move through the pathway at local level, through interleague, as well as the elite junior competition and then state-level program.

“It was a bit intimidating at first,” Shaw said. “Walking in as a 17-year-old it was a bit scary, but I had a lot of support around me. “I feel like it was a lot easier than I anticipated. “My experience at Hawthorn’s been awesome, has been really helpful and taught me a lot. “Fitness wise and as an athlete, learning how to take care of my body and also as a footballer. “I’ve learnt so much from not only coaches, but players as well.”

“You feel really at home in a way so they really help you develop and you have this relationship with them where you can trust everything that they’re saying,” Shaw said. “There’s no second guessing, I like the fact I can walk into training, get my feedback and then go to training, fix what I need to fix, come back and play as a better person. “I don’t have to chase up feedback, they’re always with you and supporting you.”

Like many people, Shaw figured when the season was first postponed, that it would come back in some capacity, but then the disappointment set in and she was resigned to the fact that she would not be able to test herself at the level.

“When it first got postponed I assumed we would only have a few weeks off and we’d be back on track sooner or later,” Shaw said. “But that was definitely not the case, so I was very disappointed when I got there and they told us at training, because I felt like I’d done pretty well throughout preseason and I’d worked hard. “It was kind of hard, you think that that time was wasted, like it definitely wasn’t, but it was very disheartening that we weren’t able to showcase what we’d done throughout preseason. It was really disappointing, but I’m sure we’ll get another chance next year.”

Shaw has always kept a positive mindset when it comes to her football career, never losing sight of being drafted, but also keeping an eye on her present situation to try and produce the best football she can for her side.

“I’d love to get drafted, that’s definitely something I’d really, really want to do,” Shaw said. “I’d also really want to do well in the VFL. “I want to provide and be a high-level player in my team so I can always be trusted to do my job and play my role at Hawthorn and as much as individually I want to get drafted, but as a team at Hawthorn I really just want us to do well and get back to that premiership that we got in 2017, not that I was involved.”

Shaw said her greatest strength was to take on feedback and adapt to whatever role her coaches needed. In terms of on-field traits, Shaw has good athleticism and can provide run out of defence and has been particularly focused on improving her offensive side and developing from a defensive player into a utility.

The Hawks’ teenager said she had been working diligently on her fitness over the break in preparation for the 2021 VFL Women’s season, with help from Hawthorn as well as her university.

“I’ve just been trying to maintain my fitness, so obviously not trying to push myself too hard, we’re going to go into preseason and I don’t want to overwork myself, but really working on my running, keeping my legs ticking over and pushing my body in a way to maintain my readiness coming into preseason,” Shaw said. “Hopefully not get too much of a shock.”

She described 2020 as a “learning curve” and said there was always an opportunity to get drafted regardless of age. Shaw herself sets short-term goals to accompany her long-term aim of being drafted, and said whether it was being selected in the Hawks’ side, having a statistical goal or providing a particular effort for her team, she was always ticking off short-term goals.

As for evolving her game, Shaw still has plenty of belief she has what it takes to make the AFL Women’s in the future.

“I just want to become better, I just want to get drafted,” Shaw said. “That’s going to be my target and I’m going to do whatever I have to do to get there. “I’m willing to put in extra hours of training, learn new skills, I really just want to make it because I know that I can because I have the right support around me.”

Shaw is not alone when it comes to disappointment of not having a season to try and improve her form, and she said while some might be tempted to question their future in the sport, she was confident the pendulum would swing back and opportunities would arise in the future.

“I don’t think a lot of people have really turned their back on footy because we’ve missed a whole season,” Shaw said. “I’ve heard a lot of girls who have commented on like ‘maybe this isn’t for me, I’ve missed a whole year, maybe I’m not ready’. “I think a lot of people just think to try and click that reset button and try and push again and try again because there’s always going to be an opportunity that is going to come out of hard work I reckon, so making sure everyone keeps going this year as much as it’s been really hard.”