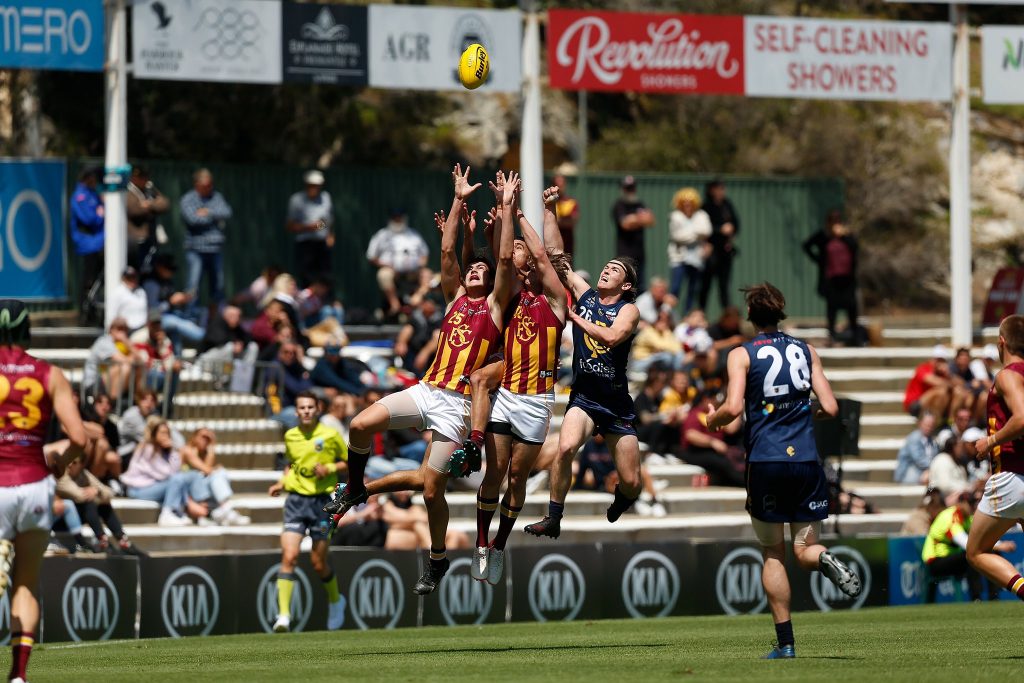 SUBIACO took out the 2020 WAFL Colts Grand Final on Sunday, trumping reigning premier and warm favourite, Claremont by 59 points at Fremantle Oval. Our scouts were on hand to take note of some of the outstanding performers, including AFL Academy members, Next Generation Academy prospects, and recent National Combine invitees.

Please consider that each set of notes showcases the opinions of our scouts individually, and there are only so many players we can keep an eye on each week.

It was a quieter game for the big-bodied midfielder, but Young still managed a solid outing and a balanced game. Young covered the ground well, doing some nice work inside the contests but also working hard to push back and help his defenders. Young was later moved forward to switch things up and took a nice mark on the wing. At his size, he could be a hard match up as a midfielder who can push forward and make an impact. Young finished the game with 17 disposals, five marks, and six tackles.

The smooth moving captain of Claremont did all he could to try and get his side over the line. A strong four-quarter performer, he could hold his head high. Western was very silky playing through the midfield, often running from congestion with ease and delivering multiple slick handballs. While not always accurate, he was getting plenty of penetration on his kicks and he would have likely had the most metres gained from his side. Western showed he had a few tricks with a scissor kick over his head in the last quarter – although not exactly effective, it did show his athleticism. Western finished the game with 25 disposals and the Fremantle NGA prospect will now look towards the All-Star games taking place in the next few weeks to continue to show to recruiters his special talent.

Another big game from the underrated defender who was a recent call-up to the AFL combine, and you could see why with the intercepting machine starting the game in fine form. He showed great courage early with a strong intercept and contested mark, and continued in a similar manner as he went back wit the flight in the second quarter. Despite a hiccup close to goal that lead to an opposition major, he was his side’s best player in the first half. Avery was moved into the midfield in the second half and still won plenty of the ball. Midfield is a position he can hopefully play in the All-Stars games to show off his versatility. While his disposal let him down from the midfield, he had no issues winning it despite not playing the role at all this year. Avery finished with 33 disposals and seven marks and was certainly one of his side’s better players who played hard for four quarters.

The talented 2021 key position prospect started the game in fine form, kicking a nice set shot goal and doing well in ruck contests inside attacking 50. His marking is a strength which he showed all game, but it was his nimbleness that really stood out in a nice passage of play in the second quarter as he streamed through the middle of the ground and kicked long inside 50, showing his athleticism. He would show that athleticism again in the last quarter, almost kicking a nice running goal from long range that just missed. Van Rooyen was moved into the midfield after the game was already lost and he showed some great signs, especially at the first centre bounce, showing a lot of energy by looking to get involved and throw his big frame around. Van Rooyen finished with 17 disposals, five marks and kicked 1.1 in an impressive outing that will help build into his draft year in 2021.

Lane was the standout ruck on the ground with his tapwork and follow-up work being first class. Standing at 204cm, it was great to see a player of his size so willing to tackle and impact the contests after his ruckwork. He was rewarded for it with a nice tackle which yielded a holding the ball call in the first quarter. Some of his tapwork was sublime, especially one to his teammate Western who couldn’t have asked for better silver service. His marking around the ground was also strong, which is what you want from your primary ruckman. Lane was a strong four-quarter performer with 14 disposals, five marks and 32 hit outs as he made claims to be the premier ruckman in this year’s draft.

Perhaps Western Australia’s best prospect going into the 2021 draft, the tall midfielder showed a lot of class with his ability to win the ball in close and distribute by hand cleanly to his teammates’ advantage. His vision by hand was outstanding, whether it was from a clearance or in general play. There was one fine example in the second quarter where he faked a handball nicely and then quickly dished off a perfect pass to his teammate to release him into space. Johnson’s goal came in the second quarter after earning a free kick. His second half was huge, winning plenty of the ball at ease and using it effectively by hand and foot. He had another great play in the last quarter, attacking the ground ball hard, cleanly giving a handball, getting it back, and almost evading another tackle before getting done in the back. Johnson had a complete game in the midfield, finishing with 21 disposals, five marks, six tackles and a goal.

What a week it has been for Vanirsen, who capped it off by winning the Mel Whinnen Medal for best on ground after taking out the Jack Clarke Medal as best and fairest of the WAFL Colts earlier in the week, and a premiership medal to go with it. A deserving winner of the each medal, Vanirsen was unstoppable through the midfield where he showed a great mix of class, hard work and impact. He had a number change to start the second quarter, going from 13 to 17 which may have confused some onlookers. He went into full attacking mode in the second half, kicking a lovely goal by crumbing and snapping truly to put the game beyond doubt at that point. He made plenty of chances in the last quarter to add to his goal tally and he really deserved another goal. His work-rate was highlighted with one passage of play where he got multiple possessions starting from defence, and finally latched onto the last chain inside 50 where he won a free kick, but would miss the long range shot at goal. Vanirsen can’t have done much more to help his draft stocks with 33 disposals, 11 marks, five tackles, and 1.3. He will have more chances to stake his claim with the upcoming All-Star games, too.

Morris started the game slowly but really came into his own in the second half, becoming an intercept marking machine which is a role he played well at last year’s Under 16 championships. Despite not having the size to play as a true key position player, he has shown a great ability to play taller with his marking ability, but what also stood out was his ground level play. Morris showed some great composure and agility to evade opponents, as he rarely gets caught. The third quarter showcased his intercept marking and his work down back really gave Claremont no chance of making any damaging forward entries. Although his kicking was shaky at times, Morris was certainly one of his side’s most damaging players, finishing with 16 disposals and eight marks. Like a few other teammates, he will get more chances to show his wares in the upcoming All-Star games.

Page has been a constant scoring force for Subiaco this year, but it was his set-up and outlet work up the ground where he was found to be most damaging and useful for his side on this occasion. Page didn’t waste much time with his disposals, often providing a hard contest, gathering cleanly, and quickly forcing the ball forward at all costs, which was a good ploy in a Grand Final when territory can be so important. He would be rewarded for his work up the ground with some goals in the third quarter; one coming from a free kick close to goal, and another being a mark close to goal where he would slot both set shots with ease. Page had a solid outing with 12 disposals and two goals while also setting up others. He is another Subiaco product who will play in the upcoming All-Star games.

Erasmus sure does know how to find the goals. The bottom-ager provided an early spark for Subiaco, helping the Lions get away with three first-half majors. Having plied his trade for Hale School during the PSA season, Erasmus only made his WAFL Colts debut in Round 9, and booted his maiden goal during the first term of this outing. Blink, and you may have missed all four of his scores, as the lively forward showed great goal sense to quickly put boot to ball and find the big sticks each time. His ability to compete aerially, and then show a clean pair of heels across the ground was excellent, as commentators likened him to Port youngster, Mitch Georgiades. He seems a promising, raw prospect for next year with plenty of scope.

Featured Image: Subiaco and Claremont’s fliers contest for a mark | Source: (Retrieved from) @WAFLOfficial via Twitter