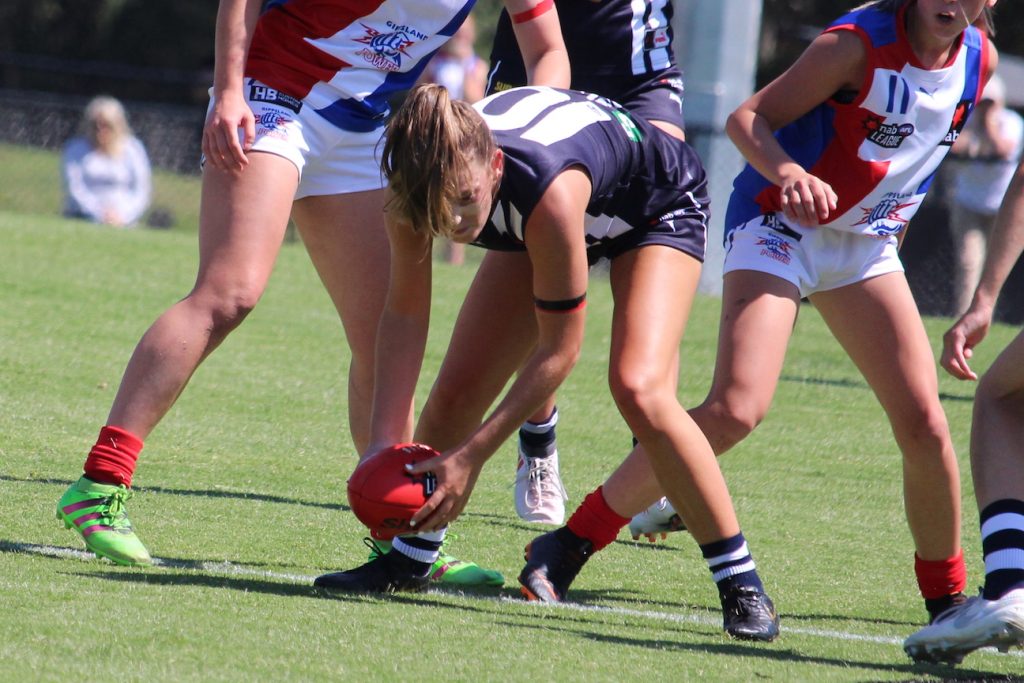 CARLY Remmos has come a long way in a short season, going from basketball convert to AFL Women’s Draft Combine invitee off the back of just of a couple of games. The Geelong Supercats National Basketball League (NBL)1 player averaged 15 disposals, five tackles and kicked a goal from her two games in the 2020 NAB League Girls season after deciding to “give it a crack”.

“I was trying something different because basketball has just basically been what I’ve been doing my whole life nearly, and then nearly a bunch of my friends were like ‘why don’t we play school footy?’ and I was like ‘oh yeah I’d be down’ and went and played and I guess I just loved the contact in it,” Remmos said. “It was a lot more contact than basketball so that was enjoyable. “But it was mainly just to have a bit of fun with schoolmates and that was about it, but I enjoyed it, so thought I’d give it a crack in the long run.”

Both her NAB League Girls and NBL1 seasons were cancelled due to COVID-19, but Remmos was hoping to juggle both for as long as she could, if she could. While she admitted it would depend on both codes and the clubs she played for, Remmos’ hope was to follow in the footsteps of Tiger Monique Conti.

“I’m not really sure (what I’ll do), it just depends who footy takes it if I was lucky enough to get drafted,” Remmos said. “It really depends on their (team that drafts me) take on the whole basketball thing. “If I have to, I’d probably just stick in the footy path, but basically it depends on what the clubs are comfortable with, both basketball and footy, and then just really go from there to be honest.”

“Monique Conti’s one that I have always been like, she does both. WNBL and AFLW so it is possible to do both, it just depends,” Remmos said. “It’s different for every person, but I’d definitely like to go down that path.”

While her football journey is a relatively new one, Remmos is no stranger to the basketball court.

“I started basketball when I was about six,” the Geelong Falcons midfielder said. “I’ve been playing ever since and gone through the Vic Country pathway and gone to Nationals for basketball and all of that sort of stuff. “Then last year I played school footy and I had a go at that and found that so much fun, I found it awesome.”

“Then I went down to Falcons, did preseason and then it was more just a bit ‘oh I’ll have a bit of fun, if it works it works, if it doesn’t it doesn’t’. “It took off and then played the first two games then obviously COVID. “That’s about it. I only started footy in the last year.”

While she does not have a great body of work to go off, Remmos said she felt like her attack on the ball – being a taller player – and her tackling were amongst her strengths. She has no fear in winning the ball and getting it out to her teammates, whilst it is just that polish when in space by foot that she is looking to develop.

“I am very new to the game so I have been working on my kicking a fair bit,” Remmos said. “That’s still got a bit of improvement, but I’ve definitely improved in that area, but just my general skills. “My handballs are pretty good and my groundballs, so it’s mostly just working on my kicking a bit more to get that a bit more on point on both feet.”

Crossing from basketball, Remmos soon found her place training with the midfielders after not knowing if she would even make the final cut. Having the fitness from basketball to match it with her experienced teammates, she was thrown into the midfield. Whilst it was partially because of her fitness, Remmos also joked that the coaching staff could not trust her to hold a line up either end.

“Before the season I knew I was going to be in the midfield,” Remmos said. “I’ll be honest, the structure of forward and back, I don’t think they (coaching staff) were prepared to put me in there yet because it was a bit more complicated than midfield, where you just run around a bit more, see ball, get ball type of thing.”

Remmos’ favourite football memory was her first official game, where she enjoyed a win against Gippsland Power and kicked her first-ever goal.

“I think just my first official game of footy and kicking my first goal, that was pretty cool,” she said. “More just being around the girls for our first game and our win, that was pretty good. “Being new to the environment and sussing it all out and getting to know the girls in a big group is a lot different. “There’s a lot more support and it’s a lot bigger, so there’s a lot more fun in it I think.”

While Remmos was not expecting to develop to the point of receiving a combine invite – she was surprised by the interest – she had a feeling it was coming once she received contact from an AFL Women’s club.

“I was quite surprised,” Remmos said. “Even when I got an email a club wanted to contact me, I was like ‘what’s going on there? that’s very surprising’. “But the combine wasn’t a huge shock, I wasn’t expecting that because I was so new, but it was really good to get the invite.”

Now she is a chance to make it to the elite level in the AFL Women’s. If she hears her name called out on draft night next Tuesday, Remmos said it would be “absolutely awesome”.

“At the start of the year … my eyes weren’t set on getting drafted because I was so new and I didn’t think I had much of a shot,” Remmos said. “But once it got towards the business end as you could call it I guess, I think being in elite sport when I was playing at Nationals, I just thrived in that environment, it was so fun. “Getting drafted would be awesome, just being able in that elite environment with a big bunch of girls. “It would mean a lot, just hard work paid off if I was to get drafted.”