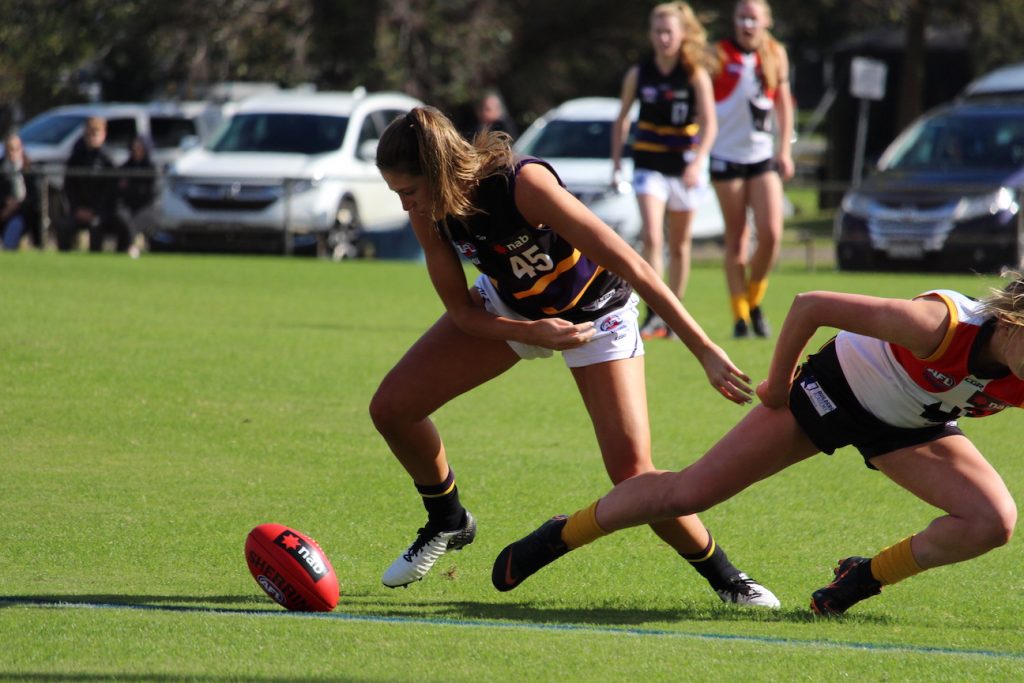 IT was all or nothing for Murray Bushrangers’ Olivia Barber who took the chance on a fledgling Australian Rules football career at the start of last year compared to her tried and trusted basketball one. Whilst Barber was tracking superbly for the Bushrangers and played for Vic Country at Under 16s level, she had already achieved that feat with basketball and more, having only completed a full year of football at the age of 16.

“I played basketball for New South Wales Country for a while for four years and then I was also training with the Australian team for that, and then I started playing footy when I was 16,” Barber said. “How footy started for me was I got asked to play footy at school one day and I got approached by some staff members from the Murray Bushrangers and I went and had some training sessions with them, and then I got into the team and I’ve played for the Murray Bushrangers for two and a half years.”

While it might sound like a familiar set of circumstances, Barber was forced to make a tough choice, told to fully commit to her National Basketball League (NBL)1 side. While Barber enjoyed the sport that had taken her to the national level, football was something that was more flexible and was taking her focus away.

“Last year I had to make a decision on whether I wanted to only play basketball or footy, because basketball just didn’t allow me to play both sports because of how successful it was and the commitments they wanted from me. “So it came down to a decision of what I loved more and that was footy so I ended up giving basketball away in March last year.”

Despite the sports only crossing over for a short time period, and Barber unable to deny her chance at representing the Bushrangers, she made her choice. Barber left her basketball and “hasn’t gone back playing basketball since”.

Living in country Victoria and representing New South Wales as well, Barber has always had plenty of travelling commitments, admitting she travelled to places such as Newcastle, Wollongong, Penrith and Sydney most weekends, and that made her school-sport life balance difficult. Football became an outlet for Barber who said she loved the physical nature of the game and how aggressive everyone on the field can be.

“I like going out on the field and being free to play,” Barber said. “Having your own game but you’re also sharing the field with 17 other teammates. “I just prefer the sport over everything else. “It’s just a game that I really love and I always turn up with a smile on my face at training or playing on game day.”

As an incredible contested mark, Barber said she was hoping to build up her endurance, doing plenty of running over the break to help with that, whilst treating the time off as a way to knuckle down on her studies being in her final year of high school. While it has given her a chance to focus on her schooling, she admitted it was devastating to have the season called off after sustaining a head knock in Round 1 this year and being ruled out of the Bushrangers’ other game.

“I was pretty devastated because I also only got to play the one game because of my head knock at the start of the year,” Barber said. “I think going into the year as a top-age player I was ready to dominate. “I was very excited, but nervous and obviously my national carnival year last year I played pretty good but I thought this year was going to be my year where I could dominate because I worked so hard in the preseason leading up to the round and unfortunately I only got to play the one game.”

Barber stood out last year at the AFL Women’s Under 18 Championships, having a real impact up forward for Vic Country as a middle-ager and earning All-Australian honours. When asked if the first game where she kicked multiple goals on Metricon Stadium was a confidence booster, she said to some degree.

“Yeah it was, but leading up to that first game I wasn’t really prepared as in I didn’t train the last couple of training sessions because of my knee, so I didn’t know how I was going to go,” Barber said. “I think goals they can say a lot, but then individually for me they don’t say much, because if I didn’t do the work to get the goal, then the goal doesn’t really matter to me. “It’s the overall game for me and how I play overall, not just the four goals that I kicked.”

Barber has been a member of the AFL Women’s Academy for a couple of years now as both a middle-ager and top-ager, which she describes as a “game changer”.

“It made me realise how professional the sport was, and how determined and committed I was to actually succeed in the sport,” Barber said. “It really helped me out a lot in my first year.”

As for someone who has been there for her throughout her sporting journey and providing her with support, it was easy to pick out an inspiration close to home.

“My dad’s been there since day one helping me out with everything and anything along my journey,” Barber said. “He’s always been my biggest inspiration and my hero. “He does everything for  me and he never lets me down and I thank him for a lot.”

Now with the AFL Women’s Draft just a couple of days away, Barber said it would be a massive honour to reach the top level, but she would also not suddenly stop the moment she got into the system, with an eye on always improving no matter what.