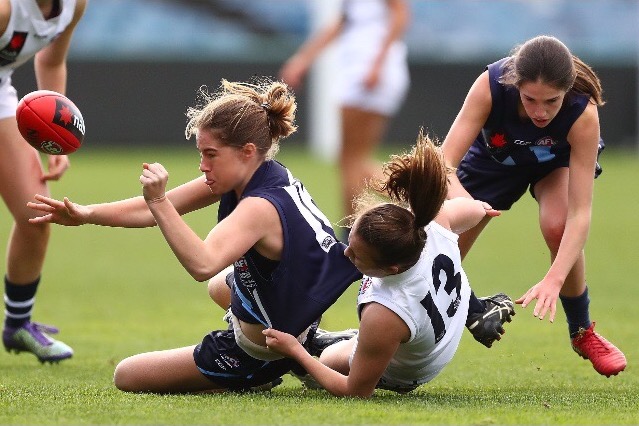 TWO games, two rare accolades. The journey of Alice O’Loughlin is one that is certainly unique in the sense that she has only played two matches in three years at the Oakleigh Chargers, due to other sporting commitments and injury. When she looks back on it, she considers it a remarkable feat to have played one game and then made the Under 16s Vic Metro squad, then only added one more game this year to earn an AFL Women’s Draft Combine invite.

“I’ve been very fortunate to be able to get those opportunities with the very limited game time they’ve seen me play,” O’Loughlin said. “Especially given this season I was hoping to string a few games together and really create a name myself, and get myself out there but I am very fortunate of what I’ve got to do with only two games.”

O’Loughlin has never been far from a sport whether it be a round ball or even oar, which has taken up a lot of her teenage years. After just the one bottom-age game in 2018, last year was meant to be a big year for the middle-ager, but her season was wiped out by an ankle injury. Fast forward to 2020 and after playing the first game, missed the second due to rowing commitments and then the season was postponed.

“I’ve always loved all my sports as long as I can remember so I’ve tried to get my hands on all sports whether it’s basketball, netball, rowing and school sports,” O’Loughlin said. “That means I’ve had to juggle footy with all of them so I haven’t really given footy my biggest footy. “But I’ve loved it, it’s always been my favourite sport and essentially once the pathway I was really excited to see where I could take it.

“Having all those sports, I never really got to play that many games,” she said. “Especially for Oakleigh, because I’ve been in the Oakleigh program for three years or four years. I’ve only ended up playing two games, which I probably would have liked to have changed that but I suppose we can’t now.”

Having played at Kew Comets since she was eight-years-old, O’Loughlin has been lucky enough to play football her whole life, it has just been one of a number of sports that she has juggled with a full platter throughout her journey. She cites the creativity of the game and playing with mates as some of the main attributes that attracted her to Aussie rules in the first place, “everyone working together to win games and thus winning a premiership”.

Having not played for the Chargers in two years, O’Loughlin was pleased to run out in Wangaratta against the Murray Bushrangers back in Round 1 where she booted three goals in a big win.

Her experience with Vic Metro was a fond one, and whilst overwhelming considering others had played more games at the level, she thoroughly enjoyed it.

“It was really good opportunity to play alongside the best talent. But yeah it was a great experience for me,” O’Loughlin said. “I must admit I was a bit nervous, and I suppose coming into a new environment I did get a bit nervous and I would have liked to have played a lot better in the Vic game, but it was just a great learning experience.”

While rowing had caused her to miss a number of football commitments – including the Chargers’ trip down to Tasmania for the Devils’ first ever home game – O’Loughlin said it had helped her over the journey.

“It really helped me with my fitness in footy,” she said. “I’ve always tried to balance the two but then after my ankle injury the main reason why I did rowing to gain fitness up again and that strength. “Then transferred that over into footy but then didn’t get the chance to.”

As someone who knew she needed a full season to prove herself, O’Loughlin said she was “devastated” when presented with the news that the season had been called off.

“I banked on having a good season and stringing a few games together,” she said. “I was pretty devastated and didn’t really know what to think at the time but I mean there’s nothing you can really do about it at the time but perform when you get the opportunity too.”

O’Loughlin’s strengths include her skills and reading of the play, which has developed over a decade of playing footy, even if it has not been at NAB League level. Her main goal at the moment is landing on an AFL Women’s list in next week’s draft and hoping to build her game further in an elite environment.

“It would be amazing just to get the opportunity to be put in a professional environment and just to have a preseason because I’ve never really got to have a full footy preseason, or full footy season so really seeing where I can take my skills when I have a full season under my belt,” O’Loughlin said.