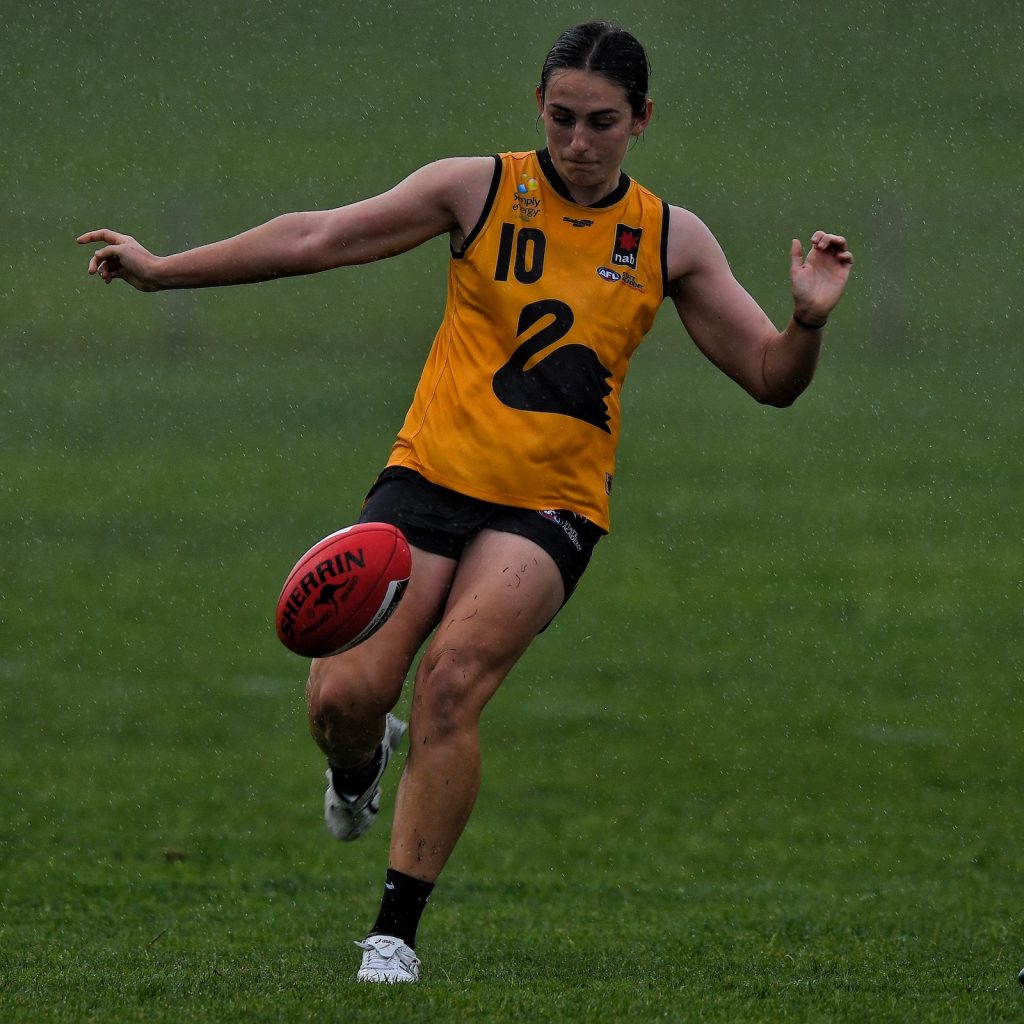 SUBIACO youngster Maggie MacLachlan has overcome her fair share of obstacles over her years on the footy field, continuously striving to come out better and present that on the field. But it was not always that way for the 171cm prospect, who was not a huge fan of the oblong-sport when she was younger until she realised she could be compensated for her effort.

“So I think I was six and everyone was playing footy, and I was like ‘I don’t want to play footy, that looks boring’, and then I was at Auskick watching the game and I was actually like, ‘no I’ll do it, I’ll play footy’ because you got a sausage sizzle after,” MacLachlan laughed.

“I joined the junior football club and played Auskick there through midfield, and then when I was like 13 I went and joined West Perth Women’s Club, which was Joondalup Falcons back then, like 2016,” she said. “So I moved from the boys to the girls, which was different.”

But MacLachlan hit a speed bump in over 2018, forced to the sidelines with continued knee tracking issues which ended up requiring surgery.

“I had knee surgery on both of my knees, so, I took – not even a year, a couple months off in 2018… I had a tracking issue with both of my knees, they kept dislocating when I would do certain things, mostly in footy,” she explained.

“So I got the left one done the September, so they moved my tibia over so it’s in line with my kneecap so it tracks properly so I can change direction, so I got that one done first and then six weeks later, when I could, I took the brace off the left one I got the right one done. So, yeah, that was quite fun.”

While returning to football was tough given MacLachlan essentially had to retrain herself to run, she was determined to make a full recovery and ensure the issue does not reoccur in the future.

“(It was) quite challenging because you obviously need to learn how to run properly and then not being nervous to change direction, or go in for contact in case someone bumps you. But, like, just rehabbing it properly so it won’t happen again.”

From there, MacLachlan moved to play with Subiaco women’s in 2019 given the lack of league opportunity at West Perth, and has not skipped a beat since with a finals berth this year.

“2019 I moved to Subiaco to play Rogers Cup with them so I played with them, didn’t play any state or anything. And then this year I still play at Subi, and was in the State Academy again. And then in the 18s teams. Now, I’m here.”

For MacLachlan, “here” is in the unprecedented position of selection for the Western Australia Football League (WAFL) Women’s All-Stars match and an invitation to the Western Australian pool of the AFL Women’s Draft Combine, both of which took place over the last week. MacLachlan says that selection for the Combine was a shock, admitting she expected to play another year especially given the lack of pathways and academy opportunities this year.

“I had no idea that this was my year because I was more thinking like being an over-ager. I thought, ‘oh this year I’ll just like go out there, play some good footy’. So when I got the email I thought oh no I’m in trouble,” MacLachlan said. “Because of COVID there wasn’t really any state academy or anything. And then when I read that I was like oh, that’s cool.”

“Knowing that my close friends like Mikayla and Bri (Hyde) were in it too I was like, ‘that’s sick’ because they’ve worked hard and I’ve tried to keep up with them, so getting chosen was a pretty cool experience.”

Booting two goals in the 2020 WAFLW competition grand final was the icing on the cake for MacLachlan, getting a little bit more out of the majors than the bragging rights at the end of the game.

“So Kara Antonio works at SEDA as a teacher, and during the week she was chipping me all week about the game, and I was just giving it back saying I can kick goals, and I had only actually kicked two in the season,” MacLachlan explained. “So I was just like, joking around and I said ‘if we win I want a pair of footy boots, your footy boots’, and she laughed and said no, ‘but if you kick a goal,’ because she was commentating, ‘I’ll give you a pair of footy boots.’”

“I was like, alright, we shook on it, and then before the game I said to her, I was like ‘I’m gonna get my boots’ and she said ‘just just focus on the game buddy’, and then when I kicked that goal, I was like in my head, ‘I get a pair of footy boots!'”

While she does not get two pairs for the two goals, it was the youngster’s first official grand final stint, and even though Subiaco did not get the win she said the experience was invaluable. The bet with Antonio seemed to spark MacLachlan into action, determined to prove her mentor wrong and committing to doing everything in her power to make it happen.

“Yeah, it does (spur me on). like when boys chip you and all that about football because they think it’s a ‘boys sport’ and you just go out there and do these things,” MacLachlan said. “Now a lot of them in my class actually have watched the games, and actually, like supported, not just think it’s rubbish.”

It’s not just proving people wrong that inspires MacLachlan to go hard, but also a familiar name at both WAFLW and AFL Women’s level.

“I’d say Hayley Miller, the captain of Subi. I’ve obviously played with her this year, and just seeing how she drives herself within football, she’s very committed to it, and playing at Freo,” MacLachlan said. “How she just handles herself on the field and off the field I think is something I want to be able to be really good at, like discipline-wise as well.”

MacLachlan is also inspired by her peers, once again citing Hyde twins Mikayla and Brianna as a few of her close friends and tough competitors.

“At state would be like Mikayla and Brianna Hyde and Bella Lewis, they really drive me to do better, until I feel like I can’t keep going, and running and stuff to push me to do my best.”

Running is something MacLachlan pointed out she wants to improve and continuously work on.

“Running, like being able to keep up with people who can run and run so I can keep going in games and running to the next contest,” she said. “I think running is one of the most important things so (I’ve been) working on that this year, and contact on my terms, so making the first contact and not waiting for them to hit me.”

As for where her strength lies, MacLachlan is confident in her kicking ability.

“(A strength is) my kicking. Both feet, I think, my right one’s really reliable and if I need to go on the left I can go on the left,” MacLachlan said.

Whether or not the talented and driven youngster gets pickup up in the 2020 AFL Women’s Draft this coming Tuesday, expect to see her continue to ply her trade on the footy field, having proven there is little that will keep her away from the action. No doubt, the experience of playing with and among some of the top Western Australian prospects has put a pep in the top-ager’s step, with plenty to look forward to for the determined youngster.

“It’s fun being around people who have the same interests as you, and want to do good and get better. Having that drive, the same drive as you.”