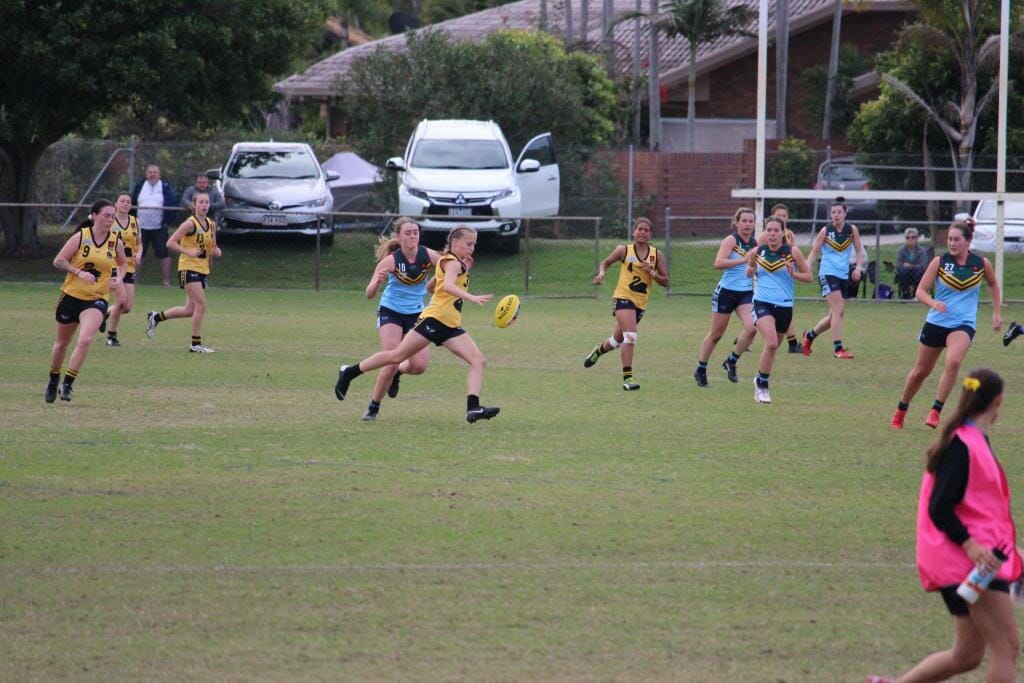 A ONE-EYED Richmond supporter, Brianna Hyde said one day it would be the dream to join her beloved Tigers and ply her trade on the footy field for the yellow and black. Hailing from Western Australia the 18-year-old has a bright future ahead of her and already has a wealth of experience under her belt having played with Swan District in the WAFL Women’s competition.

“If I could obviously would be Richmond because that would be the dream but any team would be awesome, I’d be grateful,” she said.

A member of the Swan Districts side, Hyde was not always involved in footy, instead spending some time on the track and field before finding her way back to the oblong-ball as a teenager.

“I started playing Auskick with my brothers. But after that mum would never let me play with the boys so I went to athletics,” Hyde said. “Did athletics until I think I was about 15, or 14, then I started playing or found out about Swans like the women’s side and started playing youth girls there.”

Although it took some convincing to start, Hyde’s parents are now fully onboard with her decision to play footy and attend most games to support not only her but so too her sister Mikayla.

“Yeah she (mum) didn’t want me playing with the boys I think,” she said. “But now they’re fully involved, absolutely love it and come to every game and mum wishes that she let us play when we asked 100 million times a year. But they 100 hundred per cent have our backs and support us.”

Boasting an athletics background of which her favourite events were sprinting, javelin and hurdling Hyde possesses some pretty damaging traits. But it is her love for footy and time spent watching the sport that Hyde believes is one of her biggest strengths on the footy field as it enables her to read the play and impact it accordingly.

“Probably my footy knowledge to be honest, I’ve watched a lot of footy from a young age so I can read the play pretty well,”  she said.

Standing at 164cm Hyde is not the tallest player on the footy field and is still developing areas of her game play, with the youngster identifying aspects like her body strength as a key component she wants to work on to ensure she is a dominant force.

“Yeah probably like my body size just so I can tackle harder, I struggle a bit because I’m on the smaller, lighter side so hopefully my tackling can get better,” she said.

Swan Districts has been Hyde’s home for a couple of years now with the youngster touting the family-like environment as a key aspect while also highlighting how the people there have helped her develop into the footballer she is today.

“Amazing, absolutely love the club. It’s been so much fun like my development, and really made me a better person, as well with the people always around,” she stated.

When it comes to key influences at the club it was hard for Hyde to go past Fremantle Dockers star Kara Antonio. The highly talented midfielder took both Hyde sisters under her wing, encouraging them to ply their trade at the top level of footy in WA, something Hyde is incredibly thankful for.

“Definitely Kara Antonio when she was here,” Hyde said. “I got to know her really well and then not this year, last year, she pushed me and my sister up to play League. We both weren’t confident in playing League but she had hope for us and we ended up playing the season in WAFLW.”

League was not only a step up in intensity and skill but all round competition with the lightly framed Hyde competing with much bigger bodied and experienced players. Although it took her a while to find her feet, the 18-year-old has become a regular feature in the Swan Districts and is not afraid to back herself in.

“Yeah, definitely my first year I was a bit scared because of the size of me compared to some of them. But I just got confident and I’m fine now,” she said.

Not only does Hyde play at the Swans but so too works at the club, often balancing her role as a community liaison with other elements such as her training after graduating from high school last year.

“I’m the community liaison so I do a traineeship but I work with the community, schools and run programs with troubled kids and disadvantaged kids. But yeah I love the job it’s really fun,” she said.

“Yeah, it is fun you get a bunch of new kids and get to see them grow as a person.”

Engrained in the Swans decor Hyde recounted a couple of momentous occasions, none bigger than that of winning the premiership back in 2016 with the hardworking midfielder valuing the chance to run out for her club and lift the cup.

“Probably winning the grand final in 2016 for the Swan Districts because all three grades won, our youth girls, reserves and league won, we were all premiers so that was pretty cool,” she said.

“I’d never played in a grand final before so it was absolutely amazing and to just top it off that all three grades won it was massive for the club,” Hyde said. “I don’t think that’s ever been done before, especially by women. It’s pretty cool.”