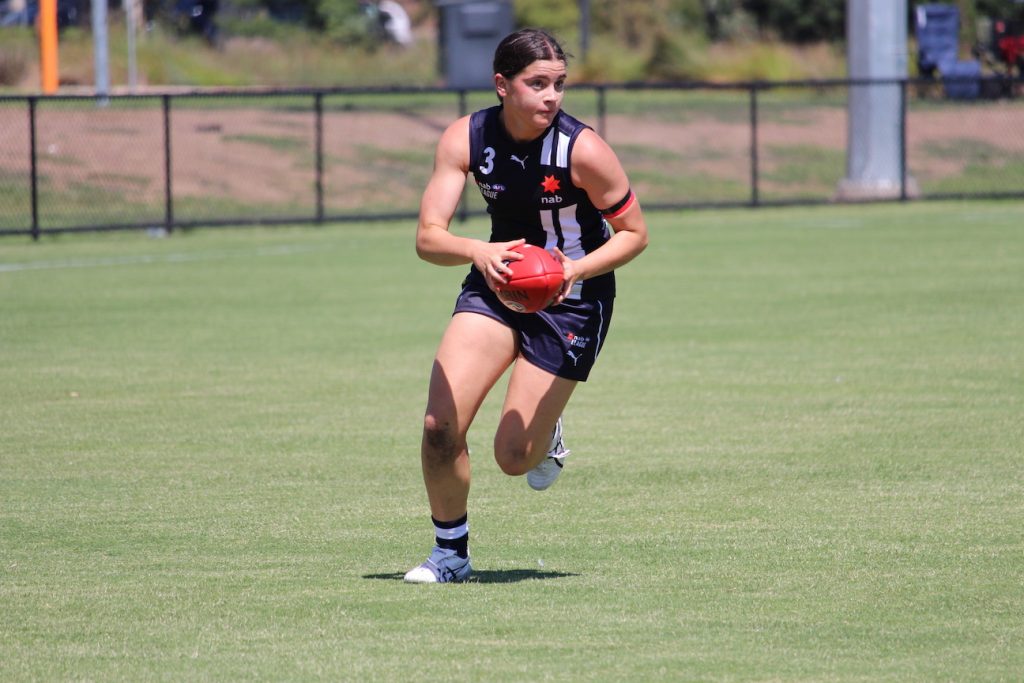 FOR Geelong Falcons ball winner Darcy Moloney, football is very much about determination and getting into the contest. A classy mover with great run and carry, Moloney is an impact player who has had a somewhat disjointed start to her Aussie rules dreams.

“I’ve always been quite sporty, so I did Auskick when I was really little, but then after a couple years I stopped because in Colac there was really nothing for girls to do in regards to football,” Moloney explained. “Then I didn’t pick up football again until Year 10 when I played school football and found out that I loved it, and then played with ‘Imps’ (Imperials) in Colac, and then got picked up to play V/Line Cup that year and then was picked up at the Falcons.”

While the midfielder picked up the footy again just a few years ago, she tried her hand at any number of sports over the years with a significant break between her youth and junior days.

“I played a lot of different sports, I’ve danced since I was little, I played netball, played basketball for a bit, did cricket with school for a while. Yeah, pretty much anything I could get my hands onto, I did,” she said.

But it was with school footy that she rediscovered her love for the oblong sport, and with that a love for the gritty intensity that comes with tackling and the innate roughness of Aussie rules. Even playing non-contact sports, Moloney suggested she was always willing to get herself into the contest with plenty of dare lending itself to the footy field.

“It’s a bit of a funny answer but I just love the toughness, the rough side of football, I love being tackled as weird as that sounds,” Moloney said. “I just love tackling and getting tackled, the roughness, the bumps, the bruises and cuts you get, I just sort of love that. You don’t really get that in many other sports.”

“In netball I’ve always been just really hard at the ball and wasn’t afraid of contesting and getting bumped on or, like out of the contest going for the ball.”

A highly competitive player, Moloney says that her drive to compete hard and contest every ball is something that she has always had.

“I’ve always been like that (competitive), since I was very very very little. I think that’s what continues to make me the player I am,” she said. “Just the attack on the ball, I feel like it’s something that you’re born with it’s not something that you get, like, that you can improve on. So I think that drive and that, you know, competitiveness, is probably my biggest strength.”

A swift transition through the pathways saw the now top-ager not only get selected for the AFL Women’s Under 18 Championships in 2019, but play all three games for Vic Country throughout the series.

“It was surreal. Like honestly I didn’t really actually know much about it until I actually found out about it,” Moloney said. “And to be honest, I didn’t think, you know, I was good enough to be selected in that side let alone actually get to play all the games and go to Queensland, and it was just a great experience and a shame that we couldn’t do it again this year.”

Like much of the NAB League top-age talent expecting to ply their trade this season, Moloney was shocked and upset when she was told that the 2020 season would not continue, getting two matches under her belt for the Falcons – averaging 26.5 touches and laying 3.5 tackles as she did so.

“I was obviously very shocked when it happened and upset when I first found out, but I realised that I just have to sort of – not get over it, but deal with it and then move on,” she said.

It was this optimistic mindset that kept her going through the confusion and frustration of a missed opportunity on-field, making the most of her chance to improve individually and utilising her aforementioned competitiveness to one-up her own early form.

“It was a great opportunity for me to work on the things that I think I need to work on, review those games and look at what I need to improve on and just work on that, work on my left foot, contest work, that sort of thing,” Moloney explained.

“It’s a great opportunity for me to improve in the end so that’s just how I looked at it.”

Moloney suggests her isolation effort would see her “miles ahead” of where she was at the beginning of the year, with a wealth of improvements adding to her potential and ability to showcase her strong work ethic.

“I feel like if we played a game now I would be miles ahead of where I was at the start of the year, I think I’ve improved a lot even in this short period from the two games we got at the start of the season to now. So I think it’ll really help if I was to get drafted into an AFL club.”

With her AFL Women’s dream close to becoming a reality, Moloney says that seeing the depth of talent across the pathways able to now step straight into the top tier is a real confidence boost, playing with and against the best across the country and all striving for that common goal.

“Watching them step into the AFL and having an impact straightaway, it just shows how much talent is in these pathways really and there’s just a bit of a confidence boost that we could potentially do the same thing if we get into a club.”

While her own competitiveness and drive have certainly played a role in getting to where she is today, Moloney credits her parents for their unwavering support and willingness to drive around the state to pursue her AFL Women’s dream.

“Obviously my parents have played the biggest factor, they’ve always been supportive of whatever I wanted to do regardless of if it was playing football or whatever so they probably played the biggest role and are my biggest inspiration because all the driving they’ve had to do for me,” Moloney said.

“Going from Colac to Geelong three times a week, to Melbourne for games and training and all those things, so yeah that would be the biggest inspiration for me just how much they’ve supported me throughout this whole thing.”