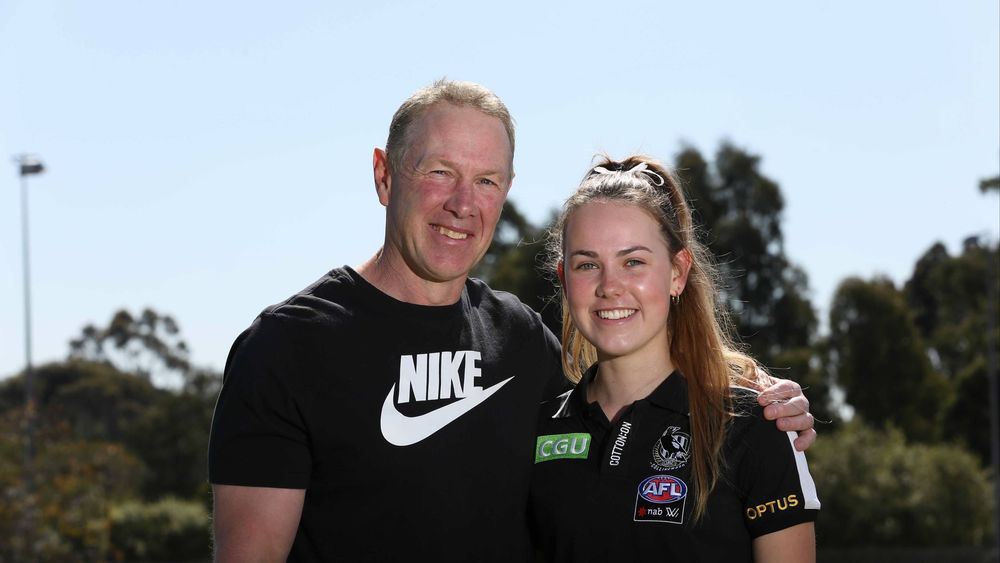 A TRIO of Browns are set to grace the Holden Centre in 2021 as the youngest of the Brown siblings, Tarni Brown joins the black and white. Following in her father’s footsteps, Eastern Ranges star and now Collingwood draftee, Brown is the first father-daughter selection in Collingwood’s history – a moment that felt a little surreal for the youngster.

“It didn’t feel quite real at the start,” Brown said. “I trained down there bit last year and early this year so I already had a bit of a feel for it but it just really came true and I got the call and everything so that was pretty cool.”

Brown decided that she needed a change in her sporting life and given that football has been ingrained in her from a young age given the family history, it is no surprise she picked up the oblong-shaped ball. Brown’s father, Gavin Brown is a well-known name amongst footy fans, especially one-eyed Collingwood supporters given his illustrious career with the club that resulted in 254 games and multiple Copeland trophies. Brown’s brothers Callum and Tyler are into their fourth and second seasons respectively with the Pies.

“Well I played basketball my whole life so I didn’t start footy until I was about 14 or 15,” she said. “So it was probably my basketball, dreaming of footy just wanted to try a different sport. And then I ended up liking it, just as much or nearly more than basketball.”

Receiving plenty of pointers along the way from her family, Brown is determined to make her own path and use her own attributes, ones she picked up from years of basketball to have an influence on the footy field.

“Yeah, I definitely reckon being a basketballer helped with my footy and just, my skills of being able to get out of tight situations, so that definitely all came from my basketball,” she said.

A couple of other key on-field attributes are the speed and agility Brown approaches her footy with, constantly on the lookout for opportunities to run freely into open space and create opportunities for her teammates. However, the youngster did make note of a few areas she wants to hone in on prior to the AFLW season commencing.

“Just trying to perfect my kicking. That’s something I’ve been working on a lot recently so I’m just aiming to get that really good so I can make sure I hit my targets properly and also my goal kicking for going into a more elite level,” Brown said.

Elevated to a leader at the Ranges, Brown noted that it was her on-field actions that set the tone, as the typically quiet footballer focused on playing her role and letting others follow, rather than direct the traffic.

“It was pretty cool. I’ve been at Ranges for three years and I was always a pretty quiet player so I was pretty happy to be able to get named a leader, so obviously not for being the loudest player but maybe just for showing different sort of attributes to the girls,” she said.

“I probably try to lead them obviously not so much for my voice but get around like the younger girls and lead them by the way I play, just being a team player, and like, trying to get on. Probably more so in that way.”

Securing that position on Collingwood’s list is just one of many goals that Brown has ahead of the AFLW season as she looks towards running out in the black and white in season 2021.

“My next goal will be to make my debut at Collingwood and then just play the best footy I can and then once I get that, I’ll make some new goals of what I want to do,” she said.

When asked about whether she was nervous to take the next step up to that elite level of football, Brown highlighted that she was more excited for the challenge and was keen to play against some of the best in the business. One player that she noted was Richmond’s Monique Conti, who is renowned for her classy movement, attack on the footy and all-round footy smarts.

“I wouldn’t say I’m nervous but probably more excited to see how I match up against like older and bigger girls and just see how much improvement I need to get to be at that level,” she said.

Much like many Melburnians it has been a challenging time for Brown, with the youngster not only having to contend with the lockdown but so too the absence of her two brothers and father who were away with their respective AFL clubs up in the Queensland hubs.

“I have my school work to keep me busy obviously my family’s been away, not my mum but my brothers and my dad have all been away so it’s been pretty quiet,” Brown said. “But just studying, going up the oval, kicking with friends and running, trying to stay fit all things like that.”

“For me I find, getting out and going for a run, probably more relaxing than anything. It’s better than just being at home with nothing to do so I prefer to stay busy and go out, go for a kick and things like that.”

“Yeah, it’s very quiet for sure, missing the boys, I’ve got dad back but really missing Cal and Tyler so I’m excited for them to come home,” Brown said. “But they usually have a lot to say at home so that’s different too, but just calling and facetiming them a lot. But excited to get them back.”

For many of the Collingwood faithful the signing of Brown is a momentous occasion with no one prouder than her father, according to the new recruit.

“He said is very proud of, not just me but Cal and Tyler as well, all three of us so he’s pretty happy to have all three of us down there and yeah just obviously proud as well.”