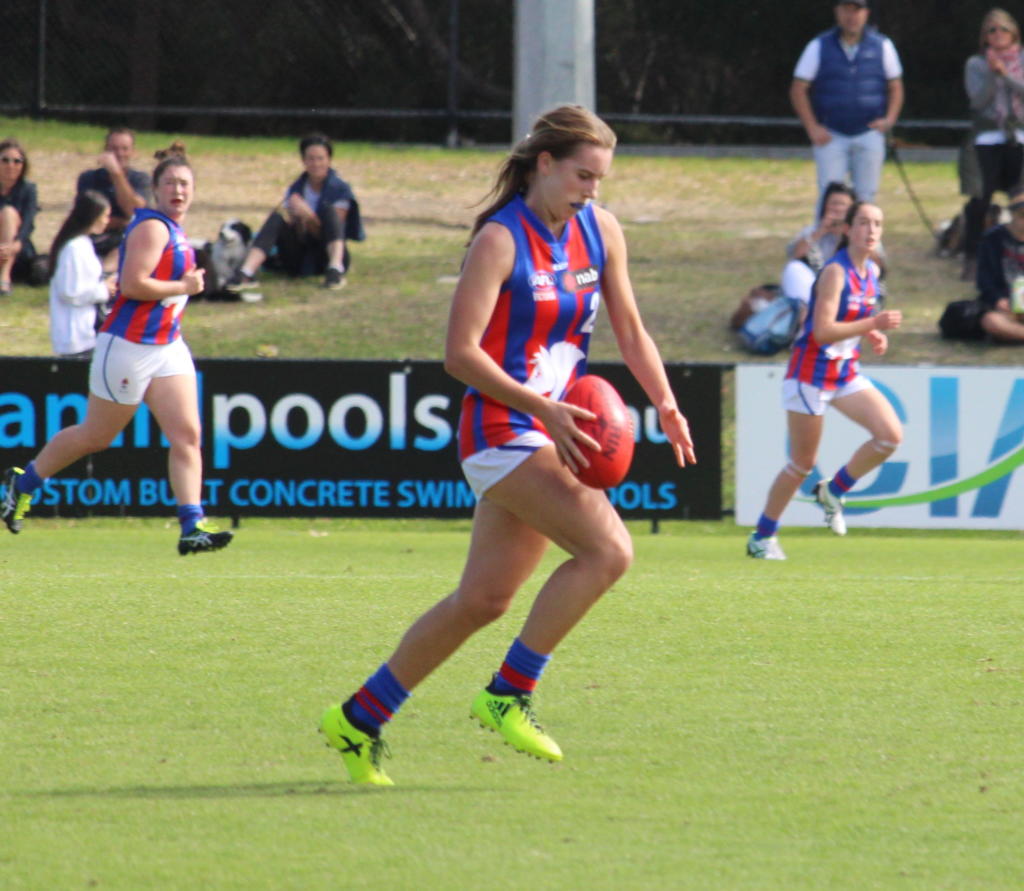 TWO-time NAB League Girls captain Mimi Hill has been a mentor at the Oakleigh Chargers over the past couple of seasons and it is easy to see why. At first she was daunted at the prospect of leading girls that were a couple of years older than her, but she settled into the role and now thrives from the task at lifting the team around her.

“The first year when I was captain, last year, I think I was 16,” she said. “I was like, ‘what is going on?’ “I was just not expecting it at all, and that was quite intimidating getting to captain older girls potentially three years older than me. “But it was also really exciting and a great opportunity to develop my leadership skills and also develop me as a footy player, because instead of like being really hard on myself in the games and getting down on the little things, mistakes I’ve made, it made me refocused on the team, and I think that developed my footy ability.

“Instead of being really hard on myself, I channelled that energy into making sure the team is on track. “If I’m having a bad game, it doesn’t matter. “I’ve still got to focus on that control like everything’s going to be alright.”

After fitting into the role as a middle-ager in 2019, Hill was named captain in her top-age year once again, and she certainly felt more comfortable from the get-go. Not only looking to build on-field performance, but lift everything she could off-field, the Chargers’ leader was “excited” about the 2020 possibilities.

Hill came runner-up in the 2019 best and fairest last year, but for her while accolades are a great honour, it is about leading from the front and doing anything she can to get her team over the line on matchday.

“Just because I value that really highly and I think it shows that you do put in each week,” Hill said.

Hill’s journey through football has been one of relative recent times, starting up when she hit high school.

“Pretty much I just kicked in the park with Dad and my siblings since I was really little, I never really did Auskick or anything,” Hill said. “Then when I got to Year 7 and a new school, I played a game of footy in class and the teacher afterwards was like you should definitely be looking to join the club team.

“I went home straight away was like, ‘Dad can you please sign me up for footy?’ He didn’t think at the time there was a girls team, but obviously everything was up and running at that point. “So he got me into local team Kew Comets and I played my first game of footy. “I was like, ‘this is actually the best sport ever’ and I basically stopped most of my other sports and just stuck to footy.”

After her first season with Kew Comets, Hill was already showing promise as a future footballing talent. The next season she was invited to join Oakleigh Chargers’ Under 15s which she said was really good because they helped develop her skills whilst she was playing within the school team. Four years later and Hill is a Vic Metro representative at Under 16s and Under 18s level, and earned an AFL Women’s Draft Combine invite.

While Hill missed out on going up to Queensland last year as a middle-ager due to the enormous amount of top-age talent on the list, she enjoyed running out against Vic Country at Werribee, having also pulled on the ‘Big V’ a year earlier at GMHBA Stadium at the Under 16s Championships.

“Vic Metro games are probably my favourite,” Hill said. “They have been my favourite games since I started playing footy just because I really enjoy stepping up like the standard. “I think that I’m able to lift with the standard and it improves my footy as well. “I just love meeting all the new people from different regions and just so great and obviously footy just brings together so many amazing people like-minded people. “It’s so great to get to meet all these new girls.”

While disappointed to miss out on going to the Gold Coast for the AFL Women’s Under 18 Championships, Hill received an invite to the AFL Women’s National Academy, something she was thrilled about and believed her Metro coach and current Western Bulldogs AFL Women’s coach, Nathan Burke might have had something to do with.

“I was just really excited that, like my hard work had paid off,” Hill said. “Nathan Burke actually mentioned after Vic Metro that he would put a good word in for me, which I wasn’t sure if that was just something he said. “But he held his word, so it was really exciting. “It just meant another trip where I could develop my footy and meet new people to. “It’s so great.”

Hill has always had a team focus, so it is no surprise that the talented top-ager looks back on her time at the Chargers from a team perspective. From struggling in the early days, to narrowly missing out on finals, to starting in a blaze of glory this year, Hill has been a key member of the transformation at the club.

“I think our first game from I think it was when I was in the Under 16s,” Hill said. “That was the first season. “So I wasn’t playing in the main team and I’m not sure they won any games that season. “Then my first game for the Under 18s team, we beat Gippsland by quite a bit, which is exciting, but then we didn’t had many wins after that.

“I think we’ve always had that good potential. We’ve always had good players. “We just weren’t gelling as a team. “But then last year, we got even better. “Girls have been around for a while, so lots of experience and (it was) very disappointing missing out on the finals. “We lost some games we shouldn’t have, and overall it was a pretty good season.”

Hill said the highlight of the 2019 season was being the only side to take points off the undefeated Northern Knights who went onto win the flag.

“The highlight was probably drawing with the Northern Knights because they were actually a powerhouse team in the competition,” Hill said. “We actually had the potential, but then this year we definitely like ‘well, there was quite a lot of new girls and younger girls’. “There was a great culture at the club. “It was just really exciting to see what we could do and it was so disappointing the end of the season (to miss out on finals).

One game in particularly that sticks out in Hill’s mind was the Chargers’ heartbreaking one-point loss to Greater Western Victoria (GWV) Rebels in the penultimate round. Just needing to win their last two games, the Chargers were strong favourites against the one-win Rebels, but in a tight contest all day the Rebels kicked a late major to cause a boilover. While Oakleigh won its last game of the season, it allowed Calder Cannons and Eastern Ranges to take the final two spots with the Knights and reigning premiers Geelong Falcons and Oakleigh finished fifth.

“That’s probably the game I’m thinking about the most, very disappointing, but I think it just kind of opened our eyes up as a team,” Hill said, looking at the positives. “We should have won it. “We were just disappointed in ourselves because we knew we had more to give. “We beat (grand finalists) Calder in the year and came close to beating (premiers) Northern. “So we felt like we deserved to be there. “But then obviously didn’t. “In the end, we didn’t deserve to be there.”

Putting the disappointment behind her Hill was determined to have a big 2020 and there were few bigger starts to the season with Oakleigh cruising to a back-to-back thrashings over a couple of younger sides in Murray Bushrangers and Tasmania Devils prior to the season being postponed.

“It was so exciting,” Hill said. “I was just, I’m looking at the team and the relationships we’d built already. “The wins we’d put on put on the board, it was so exciting for the year to come because I’ve really thought that this was the year that Oakleigh would make an impact on on the finals. “And potentially, I mean, it was a bit early in the season, but I thought we could win the premiership. “But I also didn’t want to let the girls get ahead of themselves or myself as well, because it was very early in the season.”

While the team has always been her main focus, you do not make Vic Metro and the AFL Women’s Academy without some serious talent. Hill rates her running ability and cleanliness at ground level amongst her best traits, as well as her decision making with ball-in-hand. Still lightly built compared to other players, Hill was focused on building greater body strength and improving her tackling numbers – something she concedes she could not do due to social distancing – but improve the former through gym work.

Hill is a natural midfielder, but can play inside, outside, half-back or half-forward if she needed to, predominantly sitting at half-back and using her run to advantage, then moving through the middle when required.

“I’m really happy playing anywhere,” Hill said. “Last year, Luke (O’Shannessy, head coach) from Oakleigh said, ‘We’re going to put you on the backline just to give you another area of strength, then that’s good for the draft’. “That was kind of fun learning that new position and I do enjoy getting some running power, getting some running from the backline. “Midfield is probably my favourite position, I like roving the ball, getting in down under as well.”

Hill has grown up a Hawthorn supporter and idolises Sam Mitchell who she draws comparisons to through her own game.

“I feel like I have a similar body type that quite smaller midfielder,” Hill said. “His ability to kick on both feet, it’s just always amazed me, and I think whenever dad and I kicked the footy with each other, if one of us does a really good left foot kick we say ‘oh that’s a Sammy Mitchell’, just he’s just a a legend of the game.”

Focused on the present and what she can achieve, Hill said it would be “so exciting” to hear her name read out at next week’s AFL Women’s Draft. Whilst it might not be for the brown and gold she has grown up supporting, she is just keen to earn a place and where she can meet new people and improve her football further.

“If I got the chance to play next year, it’s just so good,” Hill said. “I just feel like I can belong at that level. “I want to show people that I’m good enough to be there.”