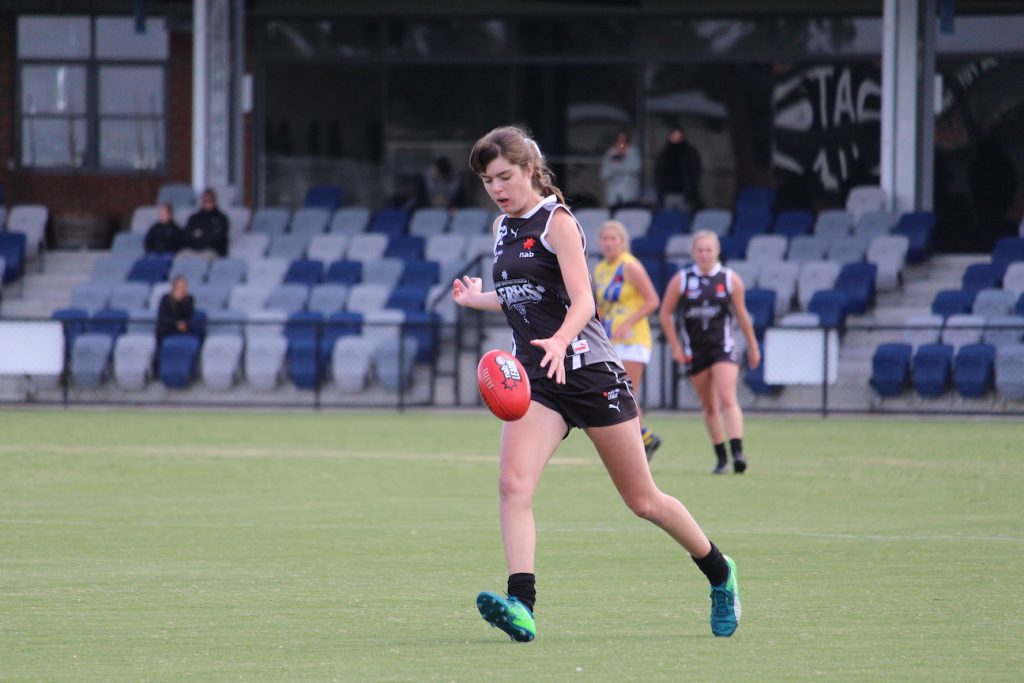 KNOWING the possibility of reaching the elite level is potentially within reach on Tuesday, Greater Western Victoria (GWV) Rebels’ Isabella Simmons is excited by the prospect. It has been a long road to this point for the tall midfielder/forward who has developed her game over the years coming through the Vic Country and AFL Women’s National Academy. When thinking about the chance of playing at the elite level and what it would mean to her, there was no doubting Simmons’ excitement.

“It would just turn my world around really,” Simmons said. “It depends, getting drafted would be amazing and so wonderful, there’s really no words I would be so happy and over the moon if I got drafted. “I think that would mean pack up and move down to Melbourne if I’m drafted by a Melbourne team, but right now there’s a lot of uncertainty, I’ve still got to sit exams and still got to get into uni to pursue a primary teaching course but I don’t know where I want to go because it will pend with footy and where I get drafted.

“It would be awesome, because who would have thought 10 years ago that there’s an AFLW and with AFLW competition,” she said. “It’s grown so much and the girls, their skills are so much more elite compared to the first season when they played. “It’s so much more exciting to watch and I’m really excited to see how it goes in the next five years because it’s going to be massive. “Girls have only been playing since they were young and now there’s so much more opportunities, great time to become a part of footy because it’s moving so quickly and growing. “It’s really just so awesome to get drafted and makes me so happy.”

Like many female footballers coming through the pathways now, there was not always the opportunity a decade ago so they looked to other sports. In Simmons’ case, this was a variety of sports, but her love for Aussie rules did not wane.

“When I was younger I always had a footy in my hands, I always loved footy,” Simmons said. “We live on 40 acres out of town, there was plenty of paddocks and land I was able to kick the footy around and I had two brothers so I would normally kick with them. “But there was really no opportunity with the girls footy, I played netball and basketball and I did athletics when I was younger through to 12-years-old when I had to stop.”

Living in western Victoria, Simmons first had the opportunity to play football when she was 14-years-old, joining the local boys team. After spending a season there, she moved into the Ararat Storm Football Club where a number of current GWV Rebels had honed their craft. She played in a premiership in her first season, and alongside now AFL Women’s talent Georgia Clarke, moved on to the GWV Rebels from Ararat.

“We weren’t like best friends, but I was a bottom-age player and she was a top-age player and she played for Ararat Storm for a couple of years and I just remember watching her what she did and then when I played Rebels when I was 16, when it was my first year for them, she was in the leadership group for Rebels,” Simmons said. “It was just nice to have a familiar face around the club because I was bottom-age and it was a bit daunting, but she made it seem like I was just playing for the Ararat Storm. “Then from there my local Ararat Storm team, a lot of opportunities with these GWV Rebels girls, I played interleague and V/Line Cup and then was lucky enough to be in the National Academy for two years and that’s where I am now.”

Simmons spent a lot of time on the road, not just for football, but for other sports such as Little Athletics where she travelled to places like Horsham and Warrnambool. Despite needing to travel 90 minutes to attend training in Ballarat, Simmons said it was not a bother and instead would have loved an additional training session a week if it was possible.

What the Rebels’ talent loves about footy is the fact that there are so many people working towards the one goal and sharing the same passion. It has allowed her to travel to places such as Queensland (AFL Women’s Under-18 Championships) and Darwin (AFL Women’s Academy), which she said handed her experiences she “didn’t think could be possible”.

“With athletics doing growing up it was an individual sport, there was a lot of pressure because it was all on you,” Simmons said. “I love that it’s (footy) a team sport and you’re all on the same team. “I’m a team player so I just love being a team player who’s apart of a group of girls who are passionate about the same thing. “We all love footy and we all have a connection with that. “The new friends you meet, I’ve met so many new people just in football and it’s really opened me up, it’s just a whole other world out there.”

Admittedly when she was invited to the AFL Women’s Academy, Simmons had no idea what it was. Once she began doing some research, she found out just how important it was, and some of the experiences she was about to partake in. Simmons said the Rebels had given her great foundations for building a career, and then the Academy had taken it to another level again with the training and coaching.

“Being a bottom-ager for the Academy, our first trip was to Canberra, and that was the best camp I’ve ever been on,” she said. “I just loved everything, it was just amazing to be able to be a part of something. “Of the girls who couldn’t be part of it, I was lucky enough to have that opportunity, I feel super lucky and grateful for that, being able to be part of the Academy for two years now and I feel like it’s made me a better person and opened me up to new things. I’ve met so many new people and it also took my footy to the next step.”

Standing at about 184cm, most people would assume Simmons plays through the ruck or at full-forward. Instead, she quite often plays on the wing, or at half-forward. While she admits she has the size to play through the ruck, the fact Maggie Caris has “dominated” there has allowed her to play in her more preferred wing/half-forward role.

“I love playing on the wing because when I was little I did athletics, I just had that natural ability to run and I love playing on the wing because you get more involved in the action and you’re around it a bit more,” Simmons said. “But if you’re versing a team and they’re absolutely pumping you, and I’m in the forward line you don’t get a lot of action, but it’s just wherever the team needs me.

“I love playing forward too, I don’t like full-forward because I feel like you’re a bit restricted to where you go because you’re only in the goalsquare, but I love the high-forward, centre half-forward, half-forward flank,” she said. “I’m able to run a bit more and this year was meant to be the year where I use my left foot being on a high flank and be able to wheel and go and hit up people on the short lead.”

Simmons rates her left boot which can be penetrating and effective, adding that in her opinion, “leftys are better than rightys”. Boasting a number of super athletic traits, Simmons has great upside for the future because of her size but ability to play as a smaller player. As for her improvements, it was about getting into the dangerous positions, admitting on some occasions she might lead too early and the ball go over her head, so it was further learning her leading craft which could round out her game.

Having spent so much time on the road over the years, Simmons credited her mother with being her main source of inspiration, as well as an international cricketer she has always looked up to throughout her life.

“I think probably my mum because she’s always been there for me through growing up, she was always there, always encouraged me so my mum definitely (is an inspiration). “But also I love Ellyse Perry, she’s an Australian cricketer, she’s been really inspirational for me because she’s so modest, and I think we have a lot of connections. “We both put the team first and just all the little things.

“But also, and she’s also not just a successful cricketer, she’s got a good character and she’s just herself and she’s got so far with that,” she said. “I think she’s been pretty inspirational and a great leader for me because we have those connections and I think that she’s not a footballer, she’s a cricketer and it’s a different sport. “I think she’s pretty cool.”

As someone no stranger to awards over multiple sports including basketball and athletics, Simmons has more accolades than most, but admits she would rather play her best to help her team, rather than herself. Looking back on her career, her choice to take up football was a brave, but now ultimately rewarding one.

“I’m just really grateful when I moved, it was a huge move with under 14 boys then moving to the girls team my first year was daunting with the Ararat Storm,” Simmons said. “That was a huge move and I’m just so grateful that I did that and the memories that I had with those girls was pretty awesome and it was just awesome.”

Now Simmons waits to hear if her world can be turned around following the 2020 AFL Women’s Draft on Tuesday night.