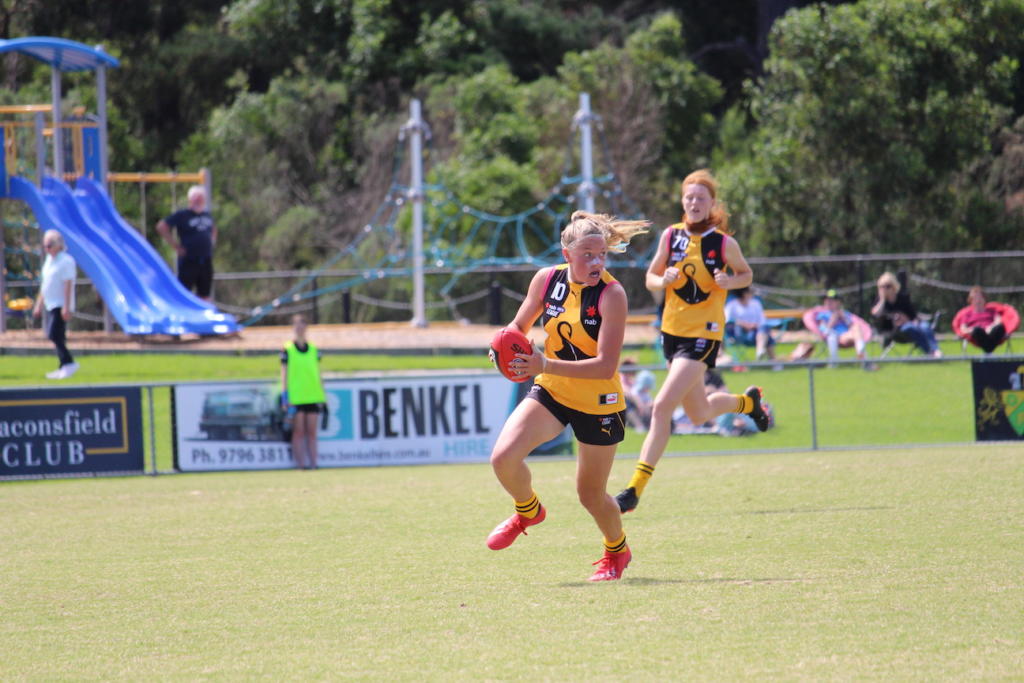 WHEN you set your mind to achieving a goal, you promise to do everything you can do to do it. Many might not live up to it, but for Dandenong Stingrays’ captain Abbey Jordan, it is fair to say she is not leaving one stone unturned in her pursuit of playing AFL Women’s.

Naturally a positive person, Jordan experienced the highs and lows of 2020 like any other person, but has never lost the faith in terms of what she is capable of, and what she believes she can achieve with her football.

“I was pretty heartbroken to start off with obviously because I thought I’ve been in this team for five years and my last year is getting cut short,” Jordan said. “I was pretty devastated to start off with, but I thought the season was still going to come back so I was just training really hard and I was trying to get around to all the girls and ensure they were still feeling alright and they were still getting out on the field. “But then when I heard it was cancelled, I was really heartbroken.

“(I thought) I don’t know if they’ve had a proper look at it or how the draft’s going to go, but I’ve been training really hard. “I sort of took my emotions onto the training field and I would just run really hard and really just try and better playing for myself not for anyone because when I heard when the draft was going ahead and I had been chosen for it (combine), I was like ‘oh my god my hard work has finally been paid off’ I’m so happy I still have a shot at this.”

Indeed the news that Jordan had been invited to the AFL Women’s National Draft Combine was a huge boost, but it came after receiving what was a mood-altering text in class during the lockdown period.

“I was in English class homeschooling on my laptop and then I got a text and that was before I found out I made the draft combine, I had an interview first,” Jordan said. So I got a text and I was like ‘oh it’s just a spam number or something and I checked it and it was like ‘hi this is the [person] from the [AFLW club], we’d love to have an interview with you’ and I was like ‘oh my god’ and I started cheering up in the middle of class.

From that moment on, it was just the extra boost the Stingrays’ captain needed to have the faith that her AFL Women’s dream was not yet over.

“I started doing a lot more research and watching all the AFLW teams and I had a whiteboard next to my desk and it was supposed to be for my school goals and I just changed it for my footy goals,” Jordan said. “Then I really started hammering down my left and right foot back up, even though I was training I wanted it perfect again. “I was going down to the footy oval pretty much every night and working every night. “I was trying to train for the combine until that was cancelled, it has been ups and downs, but it’s still been a positive journey for me.”

Jordan’s road to the draft started some time ago when she decided to head to Rye with her sister where the pair would begin their football journeys. Originally a dancer, Jordan gave footy “a shot” and then the siblings came first and second in both their club and the league best and fairests, with Abbey coming out on top in both.

“We were like ‘oh we’re sorta kind of good at this’ and then I went to a couple of interleague teams and then I made Dandenong Stingrays when I was about 15,” Jordan said. It was a big jump to start off with just because it wasn’t really step by step for the Peninsula girls. It was sort of like local, rep and into the TAC Cup or the NAB League.

“It was a pretty big jump but I was just so excited for everything,” she said. “I remember all the coaches saying all the time all that the other girls are so stern when they play, but when you’re (Jordan) running around the field you have the biggest smile on your face, you’re like the bubbly player out on the field. “Everything was just so exciting for me when I first started and it still is.”

Jordan possesses some terrific athletic traits such as her speed, as well as her strength overhead which makes her a perfect outside option. She has been gradually improving her clean hands at ground level, and building her composure with ball-in-hand.

The word ‘composure’ is one that has been in her vocabulary for many years, even if it took her a while to remember it. It was hard to forget when Stingrays’ captain turned AFL Women’s Magpie, Jordyn Allen – who Jordan named as one of her inspirations alongside Georgia Walker and Brooke Vernon – kept reminding her each training session.

“I remember I think it was (the 2018) Stingrays season Jordie said this word but I could never remember what word it was, and every single training I’d be like ‘what was that word you told me?’ and so the word she told me to practice in my games was composure,” Jordan said. “I’d always forget it, but it’s still been a big thing for my footy because she’s helped me out a long the way.”

Now it is a key focus for Jordan, who hopes to join the trio of Allen, Vernon and Walker in the AFL Women’s, with the quartet all hailing from the Rye Football Club.

“We’re all Rye girls, we’ve all played together at Rye and it was sort of like Georgia Walker got drafted and then Jordie then got drafted and then Brooke got drafted and then hopefully I’ll be next in line,” Jordan said. “But I remember us girls used to talk about it and we’d dream about it if maybe we’d all get drafted to the same team, like we all come from Rye and we’d all been through Stingrays and imagine if we all ended up on the same AFLW team. “It’s good and we all play very versatile roles in football.”

Leading into the 2020 season, Jordan was confident of having a strong season. Her 2019 one was “pretty good” and from a team perspective, she considered it “really good” but concedes there is one thing she wished she could change.

“The only thing is I took it for granted in hindsight now,” Jordan said. “I didn’t realise it would be my last full season of Stingrays, because I remember all the top-age girls and how well they came together this year and how much of a improvement they had made and stuff, and I had played with them in the last game as well. “I think I took it for granted a bit, I was thinking I would play a whole top-age season, so I didn’t take it as well as I should in hindsight.”

Over the off-season the winger was determined to do everything she could at being the best player she could be. As a top-ager and one of the most promising players in the side, Jordan was hoping, but not expecting to get the captaincy. Then, a pre-season camp and an early morning announcement changed her season.

“It was really overwhelming to start with because I didn’t think I was going to get it,” Jordan said. “I thought T (Tyanna Smith) was going to get it and I thought ‘there’s no way I’ve got this’ and so we had a camp day, we got there at about 5am in the morning and right in the middle of the day they brought everyone into the clubrooms and we had a big meeting and they were like ‘oh we’d like to announce Abbey Jordan as the captain of Stingrays’ and I was like ‘oh my gosh is this real? Like did they get the names mixed up?’. “I couldn’t wipe the smile off my face that day. “I feel like I really support the team really well and I was so happy and it was one of the big goals I wanted to achieve so I was so grateful that day.”

From a team perspective, Dandenong started strongly winning two of their first three games before the season was called off, which was disappointing for Jordan and her teammates as she believed they had what it took to go deep in 2020.

“I remember the year before I made Stingrays we went down and watched the grand final they played at Frankston Oval and I was like ‘oh my god I can’t wait to do that one day’ and unfortunately for the last couple of years we haven’t been able to make it, but this year with the bottom-agers coming up and the middle-agers we had and I’d been working with the top-agers for so many years,” Jordan said. “I was like ‘oh I feel like we can definitely have a crack at making the granny this year’.

“The start of our season started off so strong, having two wins out of three and the third one being pretty close. “I felt like our team this year really moulded together well. “I feel like this team if we made it all the way through I reckon we would have had a really good shot of the grand final.”

As an Under 16s Vic Country representative, a three-time league best and fairest and four-time club best and fairest for Rye, Jordan has had her fair share of accolades at junior level. She captained the interleague team in 2016 and vice-captained the V/Line side a year late. Constantly involved in leadership roles, it was no surprise to see her dedicated to her craft during the time off, focusing on her skills and sprint work.

Jordan has her own personal goals that she sets each time she trains, indicating the work ethic she has. It could be as simple as hitting 20 targets on her opposite left foot before going into her standard training, and then build to bigger goals. Now there is one goal that is less than a week away and there is little doubt in how much it would mean to Jordan if her name was to be called out at next week’s AFL Women’s Draft.

“It would actually be my dream, and one I think about every single day when I’m going to sleep at night and I’m thinking ‘oh there’s only 10 days left, nine days left’,” Jordan said. “It would mean the world to me, it’s what I’ve been training for ever since I started footy and just making it up the ranks and finally making it and knowing all my hard work has actually paid off. “Because every day after school, people are like ‘oh what are you up to?’ and I’m like ‘oh I’ve got training and training again’ but it would just be like the biggest achievement I’ve ever made. “I’ll probably cry on the night if I get drafted but it would be incredible.”