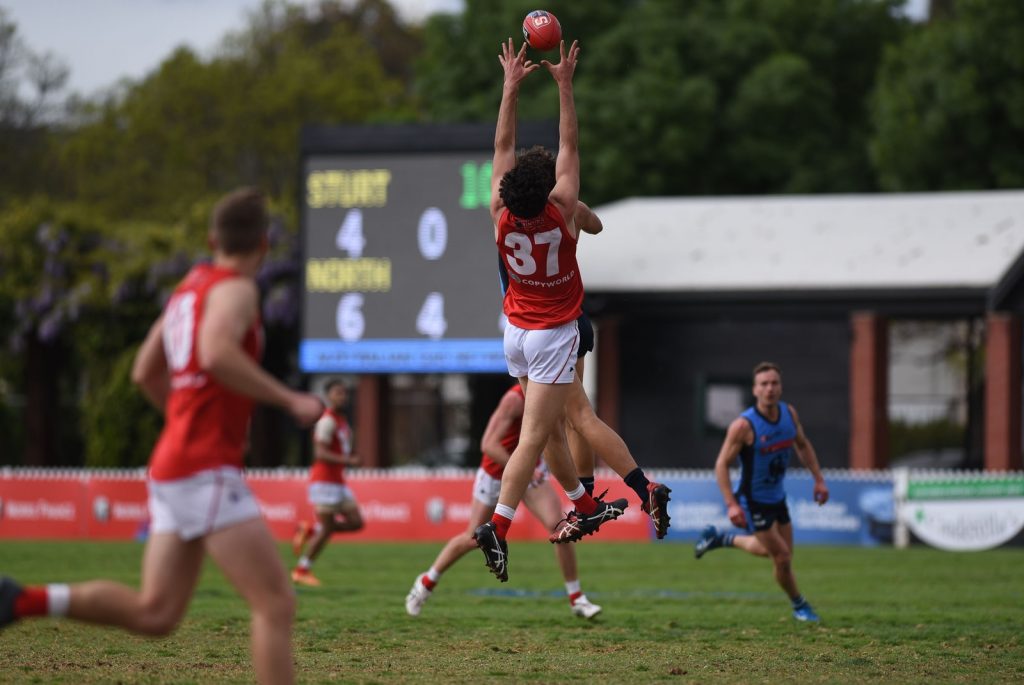 TEENAGE sensation Lachlan Jones will return to the Eagles senior side for their semi-final clash with North Adelaide. The Port Adelaide Next Generation Academy prospect rolled his ankle in Woodville-West Torrens’ round 13 victory over West Adelaide, preventing him from taking part in the final match of the minor round. Jones did not test in the South Australian draft combine during the week out of precaution, but is expected to make his return after being named on the half-back flank.

Fellow teenager Ben Jungfer is also a possibility of taking part in his first SANFL finals series, having performed well in the senior side since debuting in Round 13. He has been named on the extended interchange, along with Tasmanian defender Rhyan Mansell.

Roosters defender Karl Finlay is also set to get a taste of finals action when he lines up at full-back for Jacob Surjan‘s men. Fellow tall Dyson Hilder has been named on the extended bench.

Canberra import Tom Highmore has been named at centre-half-back for South Adelaide when they take on the reigning premiers, Glenelg, in the second game of an Adelaide Oval double-header. Exciting small forward Beau McCreery has been named in the forward pocket after he wasn’t risked for the clubs final minor round match. 17-year-old future star Jason Horne has been included on the extended bench.

Meanwhile, Glenelg defender Luke Parks (back pocket) and utility Callum Park (wing) have both been named on the field for the Tigers as they look to defend their crown.

Sturt defender and Adelaide Next Generation Academy prospect James Borlase has been included in Sturt’s reserves side for their clash with North Adelaide at X Convenience Oval on Saturday morning, alongside wingman Josh Shute and key forward Tom Emmett.

Ball-magnet Tom Powell will return to Sturt’s under-18s side for their semi-final clash with Norwood, after he missed last weekend’s encounter with Glenelg and the draft combine testing with calf tightness. He will re-join the consistent Mani Liddy and Will Spain in the engine room for the minor premiers. Malachy Carruthers has been named on the half-back flank and exciting bottom-ager Morgan Ferres at centre-half-forward.

The Redlegs have also named a strong side for the all-important clash with their eastern suburbs rivals. Prolific pocket-rocket Henry Nelligan and dynamic goal-kicker Jack Saunders will lead the Norwood midfield unit into battle, supported by bottom-ager Cooper Murley and classy utility Michael Cavallaro. Gun forward Finn Heard will provide a dangerous target in attack, having booted 20 goals in just six games during the minor rounds. At the opposite end of the ground, the club will be hoping defensive duo Daniel Fairbrother and Sam Duke can intercept and set-up the play for the Redlegs off half-back using their clean foot skills.

The Eagles under-18s have named a settled line-up for their semi-final with South Adelaide. Power father-son prospect Taj Schofield performed strongly at the combine during the week and has been named in the forward pocket, alongside tall Henry Smith (centre-half-forward) and club leading goalkicker Jack Wheare (half-forward flank). Caleb Poulter has been named in the centre, with ruckman Zac Phillips, bottom-aged ball-magnet Jase Burgoyne and the consistent Max Lister also named in the starting midfield rotation.

South Adelaide draft bolter Brayden Cook will be looking to replicate his match-winning performance the last time the clubs met, back in Round 8. Cook, who booted a competition-high 26 goals in 12 minor-round games, has been named on the wing, with versatile AFL Academy member Nick Kraemer selected at half-forward. The Panthers will also be hoping dynamic bottom-ager Arlo Draper (forward pocket) and the talented Liam Hamilton (half-forward flank) can help the club kick a winning score. After winning 33 disposals in his first under-18s game of the year last weekend, Zac Dumesny will provide the side with flexibility and skill. Will Verrall is set to lead the ruck division, with 17-year-old Matthew Roberts and the big-bodied Harry Spacie to do the roving.