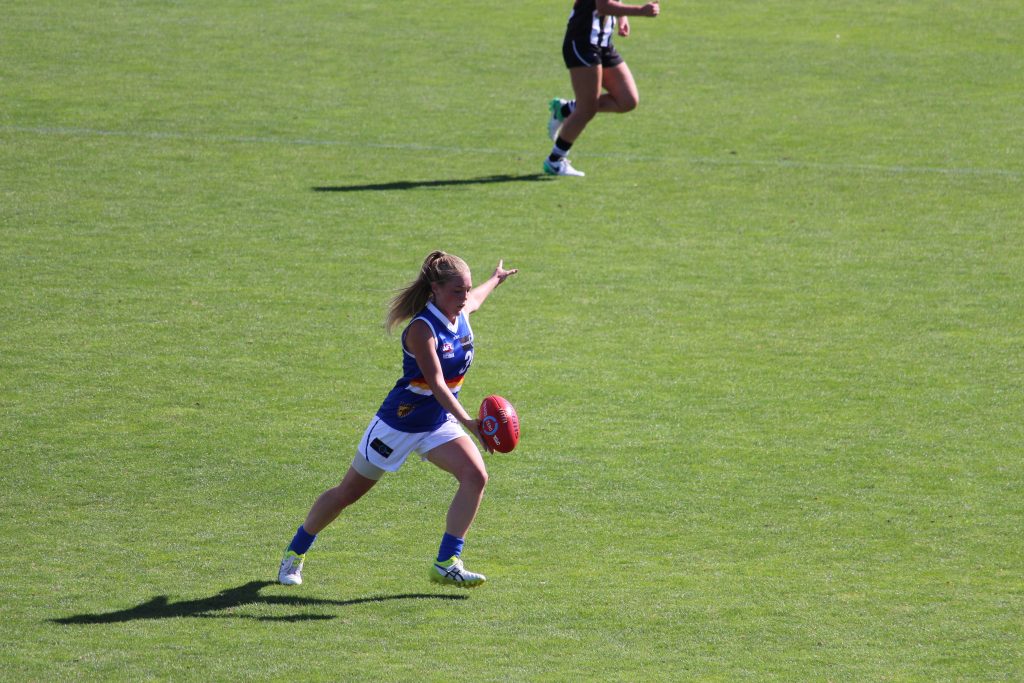 IT has been an unconventional season of NAB League, with the competition cancelled three games in and subsequently putting a halt to Eastern Ranges captain Olivia Meagher’s top age year and captaincy aspirations.

“I didn’t believe that,” she said. “We were on our way to training and then we got the text saying that it’s cancelled. And we were literally five seconds away from the ground so pretty upsetting.”

“After that and not being able to go back I just missed all the girls, and having the chance to be a captain for a full season and seeing where we ended up towards the end of the season, if we made finals or not. I just couldn’t believe it, just felt really fake and like we were going to go back and then it really hit that it was cancelled and I got really upset,” the Ranges captain said.

Meagher recognised that the cancellation of the season not only affected her but so too her fellow teammates and competitors that were in their top-age year of NAB League, who shared the same hopes of getting drafted.

“You know, me being a top age, kind of just been taken away from me. But everyone (that were) top agers (are) in the same boat I guess, I just had to keep going at home and just like try my best to stay fit and everything else,” Meagher said.

Despite only playing the three games, Meagher highlighted just how excited she was to lead the girls out onto the field and really provide that voice of reason and guidance for the young up and coming prospects in the Ranges squad.

“Awesome being able to run out and lead the girls from the club rooms, it’s just one of the best feelings to turn around and see them all following me,” she said. “Even though there was only three games. They still were different compared to every other season just because I was that top age. I had just a different feeling running out onto the ground, not being a little baby anymore.”

Joining the boys footy team at Upper Gully in Under 10s, Meagher developed her love for the game and while she had a short stint on the netball court, found her way back to the oblong-ball in Under 16s. The Eastern Ranges product has blossomed into an influential leader noting a couple of key attributes when on the footy field, ranging from her body strength to her voice.

“I love to be a leader especially to help guide the girls in footy as well,” she said. “I think I’m a good role model as well, a lot of the younger girls look up to me just because I’ve been playing footy for quite a few years.”

Coming to terms with a cancelled season, a potential forgo of her AFLW dreams and a state-wide lockdown due to the COVID-19 pandemic, the youngster admits there were moments where she really struggled to find motivation to keep pushing.

“At the start I was thinking that the season was going go going to go back and I had to just keep my fitness up and then when we got the final announcement that it was really cancelled, I did lose a bit of motivation because I thought it was done for the year, there’d be no draft and, you know, it was over,” she said. “But then I got the announcement that the draft combine was coming up and that’s when I was like, pull my head in. I need to, get ready for this.”

Her get up and go mentality was in part due to her three brothers, spurring her on and encouraging when it came to her fitness regime and diet to ensure she was in tip top shape ahead of the Draft Combine.

“My older brothers have helped me out because we all know a lot about nutrition and diet and fitness and all that so they were helping me, telling me the right thing to have, helping me with my running and my fitness and making sure that I always had the Draft Combine testing in mind. So, always thought about it with my actions of what I ate, or what I did in terms of training,” she said.

In terms of balancing her schedule with things such as training and school, Meagher had her hands full. The Year 12 student was rendered to remote learning for most of the term due to the COVID-19 outbreak, while also having to manage her own training load in order to stay ahead of the pack for the upcoming Draft Combine. A difficult feat no doubt.

“Yeah I found it pretty challenging at the start, having to do school from home and then motivate myself to get up, get dressed. And, you know, go for a run or do a workout. It was hard because I just get so drained from sitting in front of a computer screen all day, and then having to get up. That’s one thing I found challenging,” she said.

“It’s a lot more easier to motivate myself now and to get up and just having that Draft Combine testing in the back of my head just kept me going as well, to know that I have a reason to do this and that is something that’s going to come out of it, and not just you know doing it for the sake of staying fit. Yeah, just having a reason to keep pushing,” Meagher said.

Receiving the Draft Combine invite was an incredibly exciting and humbling moment for the tenacious footballer, given the rollercoaster year that 2020 has been. It also proved that her stature was not going to get in the way of her potentially living her dream of getting drafted and playing AFLW.

“I was really honoured to be recognised. I was very nervous as well because there are 80 other girls in it as well. But I just have to believe in myself when it comes to the testing to know that I have been picked for a reason, regardless of what I do get because of lockdown and everyone hasn’t been able to maintain the fitness that they usually do, just to keep in mind that I have been picked for a reason. Like, just hope for the best when it comes to draft day,” Meagher said.

With the draft just around the corner and Meagher counting down the days until her dream potentially becomes a reality, she is not concerned with “what pick, or what club” she lands at, she just has “a dream to go to any AFLW club”.