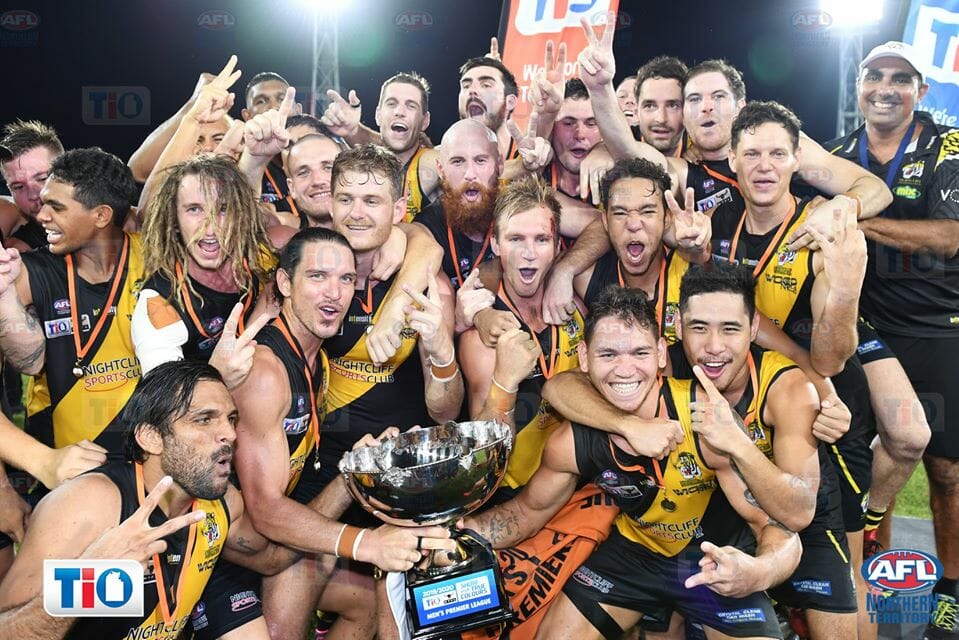 THE 2020/21 Northern Territory Football League (NTFL) Men’s Premier League season is set to bounce down tonight, as Waratah takes on Palmerston at Gardens Oval. After an off-season which saw the points and fly-in rules adjusted, but a raft of players putting pen to paper across all eight clubs, this year’s instalment promises to raise plenty of intrigue and produce even more quality.

In our club-by-club season preview, we take a look at how each side may stack up for the upcoming campaign, touching on the potential new signings and important factors for each team, while also serving a reminder of where they each left off.

After an up and down 2019/20 season, the Darwin Buffaloes will hope to hold onto the finals place it managed to secure last time out. The Double Blues stormed out of the gates, but struggled to find the required consistency later in the season and exited the finals with barely a whimper against Southern Districts.

Consistency may well be a difficult feat to manage once again, with a coaching change and max exodus of players putting the Buffs in a tough position. While interstaters Brodie Foster and Ryan Pendlebury have recommitted, with outgoing coach Matt Campbell also set to remain onboard in a playing capacity, Darwin has lost a series of big names. New coach Cameron Stokes will have to plug gaps left by last year’s leading goalkicker Daniel Stafford, best and fairest winner Chris Williams, and utility Zak Stephenson, who have all switched to Palmerston.

Exciting goalkickers Brayden Culhane (Wanderers) and Adam Sambono (Tiwi) have also moved through the exit door, leaving a big shoes for new recruits to fill. Much will also be expected of young gun Antonio James, who is fresh off a starring South Australian school football season with Westminster. Fellow youngster Isaac Seden-Kurnoth will also garner plenty of attention, providing the green shoots Darwin may be after during a transitional period along with Ishmael Palmer and Tim Eldridge.

Nightcliff begins its back-to-back premiership defence with a 2019/20 Grand Final rematch against St Mary’s, which should serve as a good measuring stick for the Tigers’ motivation and team cohesion after another big off-season. Premiership hero Trent Melville may have played his final NTFL game in last year’s decider, but the reigning premiers have a bunch of regulars and new recruits to cover any potential losses.

The Tigers’ notoriously deep pockets have lured a number of big-name VFL players, along with a host of Victorians from prominent local/regional leagues, and even the NAB League. Fresh off a strong WAFL season with Claremont which could yet end in premiership glory, Nightcliff junior Ryan Nyhuis would prove the cherry on top of the Tigers’ numerous recruits, along with former Palmerston gun, Kyle Emery.

Homegrown talent remains too, with the likes of Ryan Mu, and Liam Holt-Fitz enjoying steep rises, while Cam Ilett goes around for his 21st season, and Nichols Medalist Brodie Filo lines up once again. It is hard to see the Tigers falling off given the scary depth they possess once again, and it should be a cracking season for fans of the yellow and black.

Alwyn Davey‘s Palmerston outfit is poised to bounce back strongly from a season which saw them finish last in 2019/20. Strong inter-league recruiting sees them well placed to potentially make a run for finals, with the back-end of the competition evening up this year. A trio of Buffaloes; Daniel Stafford, Chris Williams, and Zak Stephenson should add to the Magpies’ spine, along with returning junior Tyrrell Lui.

Young talent should be in good shape too, with Lui joined by Nigel Lockyer Jnr and Sandy Brock as pillars up either end, while Jonty Patrick returns from SANFL Under 18s duties with Central Districts. The Davey family connection of Alwyn, Russell, and potentially Aaron adds experience, along with mainstay ruckman Matthew Dennis, who has recommitted to the Magpies. That’s not to mention Alywn’s twin sons, who should also run through the Premier League side.

A steady start against Waratah in the season opener should put them in good stead, serving as a decent test of where the side will be at in 2020/21.

Southern Districts will hope the momentum of a spirited finals charge will carry on into season 2020/21, with quite a steady squad remaining in tact for Matt Cannard‘s first year at the helm. Other sides may fancy themselves to move past the Crocs given their relatively quiet off-season, though a strong core and some handy fly-ins should keep Districts within the finals hunt.

The news of Josiah Farrer‘s ACL tear is a big blow to the Crocs’ premiership hopes, though Will Farrer remains as a goalkicking midfielder, while Charlie McAdam and Dean Staunton are other mainstays who can steady the ship. Young outside bolter Brandon Rusca looked primed for a big year after spending some time with the Gold Coast SUNS, while Brodie Lake may sneak some game time in before the AFL Draft. Fellow youngsters Jesse Clark and Jay Dahlhaus have also moved up from Victoria, with Clark a solid defender who captained the Geelong Falcons last year, while Dahlhaus is cut from the same cloth as cousin, Luke.

With a couple more relocating coups, Southern Districts should be able to enjoy some good form throughout the year. Having made a name as one of the competition’s premier teams across the last few years, the Crocs will be hungry not to fall out of the leading pack.

After a heartbreaking Grand Final defeat to Nightcliff, St Mary’s will look to go one-better in season 2020/21 after staying busy in the off-season. A number of big names remain, including Shaun Edwards, Jackson Calder, and Jackson Paine, and Nate Paredes, with Raphael Clarke also set to feature. Ben Long will be a handy addition once his WAFL campaign ends, while returning stars Ross Tungatalum and Anthony Davis promise to add a new dimension to the Saints’ side. Will Hams is another experienced head set to enter the fold, boasting AFL experience.

Add to that recruits of former VFL, NAB League, and Geelong Football League players, and St Mary’s should again prove to be a force in this year’s competition. The recommitment of many stars who helped the club climb off a bottom-place finish in 2018/19 is great to see, with the depth of the squad now right up there with Nightcliff ahead of what should be an exciting season for Saints fans. Having come from a long way back last year, they should start right at the forefront, especially if they can knock the Tigers off in Round 1.

One of last year’s most exciting teams, the Tiwi Bombers will be out to make good on their straight-sets finals exit in 2019/20, starting with a Round 1 grudge match against Darwin. The Bombers have added some handy interstate quality, while also managing to secure the services of prolific goalkicker Adam Sambono from the Buffaloes. A major out, though, will be former AFL midfielder Nathan Djerrkura, who moves to Wanderers.

The Bombers’ speed and ease of transition will again put them in good stead this year, with the likes of Harley Puruntatameri and Henry Kerinaiua running the lines, while Jeffrey Simon adds class through the middle or up either end. Tiwi’s mainstays are always important too, and should help secure their side a finals spot once again in 2020/21, but it’ll be tight. Fans will also hope to see a bit more of Cyril Rioli too, after his successful cameo last time around.

Wanderers will look to address and improve on a massive drop-off in form towards the end of last season, as the Muk Muks begin a fresh campaign against Southern Districts tomorrow night. The Eagles’ stocks see them primed for a finals tilt, with the likes of Nathan Djerrkura and Brayden Culhane coming in from rival clubs, while Josh Cubillo and Marlon Motlop are set to feature more prominently as Jonas Niki and Clifford Jamahl make their returns.

In terms of interstate recruits, the Eagles have also dipped into the Victorian pool with a mix of experienced and young players entering the fold, set to line up as soon as in Round 1. The Eagles also lay claim to 2019/20 Nichols Medalist Beau O’Connell, who formed a strong midfield partnership with Braedon McLean, but the hole Joel Jeffrey will leave come AFL Draft time is a big one to fill.

Still, the Muk Muks will fancy themselves to improve greatly after showing some great promise early last year, and face a very good test first up against the Crocs.

After an inconsistent season saw them finish best of the rest in sixth, the Warriors have plenty to prove in their 2020/21 campaign. Along with Nightcliff, Waratah has been one of the busiest clubs during the off-season, luring a mass amount of players from all kinds of leagues and levels in Victoria. Young key forward Ned Stevens also returns as a big coup, taking some of the goalkicking pressure of zippy midfielder/forward Kim Kantilla.

The likes of state leaguers Brodie Carroll and Callum Searle also line up for the Warriors, with Jae McGrath another important player to commit to the cause. As usual, Abe Ankers will be the key man, and all involved will hope he can run out more frequently this time around. Expectations will be high for a healthy rise this season considering Waratah’s various coups, but making the next step is always tough, especially with others improving around them.