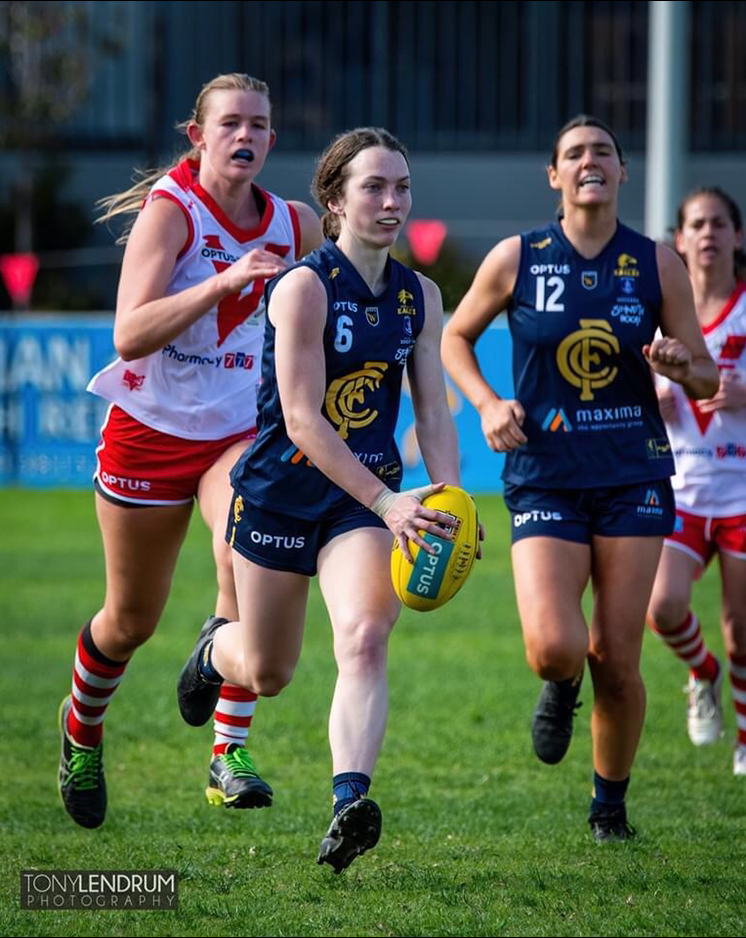 A RELATIVE newcomer to Australian rules football, Jess Low is one who has improved rapidly in the past couple of years. The West Australian has gone from playing at Amateurs level to West Australian Football League (WAFL) Women’s level in a short space of time, making her League debut in 2019 and winning the Rookie of the Year for both the competition and Claremont, as well as the Tigers’ best and fairest.

Low remembers her League debut well, coming in for the Tigers against the eventual premiers East Fremantle, she noticed the difference even from the Reserves to the League.

“It was Indigenous Round and we played East Fremantle and I was just so hyped the whole time and we came away with the win and it was just great being out there and seeing the different pace of the game and working quite hard that year to get that debut,” Low said.

Along the way Low has had plenty of inspirations with the captains of her sides leading the way and being influential, helping her improve as she moved up through the pathway.

“I’ve had lots of people who have been quite inspiring,” Low said. “My first captain in Amateurs Cathy Wealthy-Polony, she was just amazing. “Such a team player, but also never let the role of captaincy or anything get her down and that holds for the captain this year, Ella Smith. “She’s also going to the combine and I think she’s been super good and focused and always plays consistent each week.

She admits coming from a basketball background that kicking was “probably the hardest thing to get the hang of” with Aussie rules football.

“I played a bit of soccer so I was used to the round ball,” Low said. “But I always liked running and just the athletics side of it so that didn’t come too hard. “So I picked up all that skills, but the kicking has been the hardest to adapt to and just the general game sense. “But I picked it up, I’m still learning though for sure.”

Low was egged on by her family to take up a sport having focused on her studies during school, so after being primarily a basketballer, she decided to change pace and chose the Australian game.

“It was my first year out of high school and I wasn’t really playing any team sport and my dad and my grandad said to me one day ‘nah you have to start up playing something’ so I looked around and a couple of my old mates from basketball were playing footy now,” Low said. “Just down at the local West Coast Cowan Amateur Club so I just rocked up one night and just loved it from the start.”

From there, AFL Women’s trailblazer Jan Cooper spotted her – Cooper’s son played at the same club – and invited Low to trial at the West Coast Eagles Alternative Talent Search Day and High Performance Academy. One thing led to another and Low was zoned to Claremont where she took up a spot for her first season last year. Now in her third year out of high school and second year in the WAFL Women’s, Low has come on in leaps and bounds enough to earn an AFL Women’s Draft combine invitation.

“When the email came through I was quite excited,” Low said. “Because it came a week before our season finished so I didn’t really want to think about it too much because we had a game that weekend that would determine if we played finals. “But it’s been really good since we didn’t quite make finals, it’s given me something to focus on and footy is not over for the year yet which I always like.”

Low has developed rapidly over the couple of years, but most importantly the 165cm talent who turns 21 next month has enjoyed the ride and everything about the sport.

“My favourite sport beforehand was basketball and probably soccer and touch rugby,” Low said. “I feel like football just combined all the best things about those sports. “So you’d get to use your hand-eye coordination but you also get to use… as I mentioned I do like running so it’s always a good workout no matter how the game goes. “You get a good run around and the body work is a bit different to the other ones but you get to use any type of skill you have and get to incorporate into the game so I’ve liked that from the start.

“A different sense that I really love would be the team camaraderie that you get,” she said. “Because you definitely can’t rely on one person to win a game, so there’s a bit more of that team atmosphere compared to some smaller team sports that I’ve played.”

Low has been lucky enough to maintain a relatively stable 2020 and her goals for this year included her preparation and her strength, which were among her Key Performance Indicator (KPI) improvements for 2020. That, and she wanted to spend more time up the ground because of the extra challenge.

“I’d love to gain a bit more experience in the midfield and just because it’s a bit more chaotic and you’re under a lot more pressure to read the situation so I’d love to keep working on that and make the best decision in the moment,” Low said. “Which holds for half-back as well, but it’s a bit easier to read and have a bit more time for it to come in than midfield where you’re under the pump. “That would be my key area to work on.” 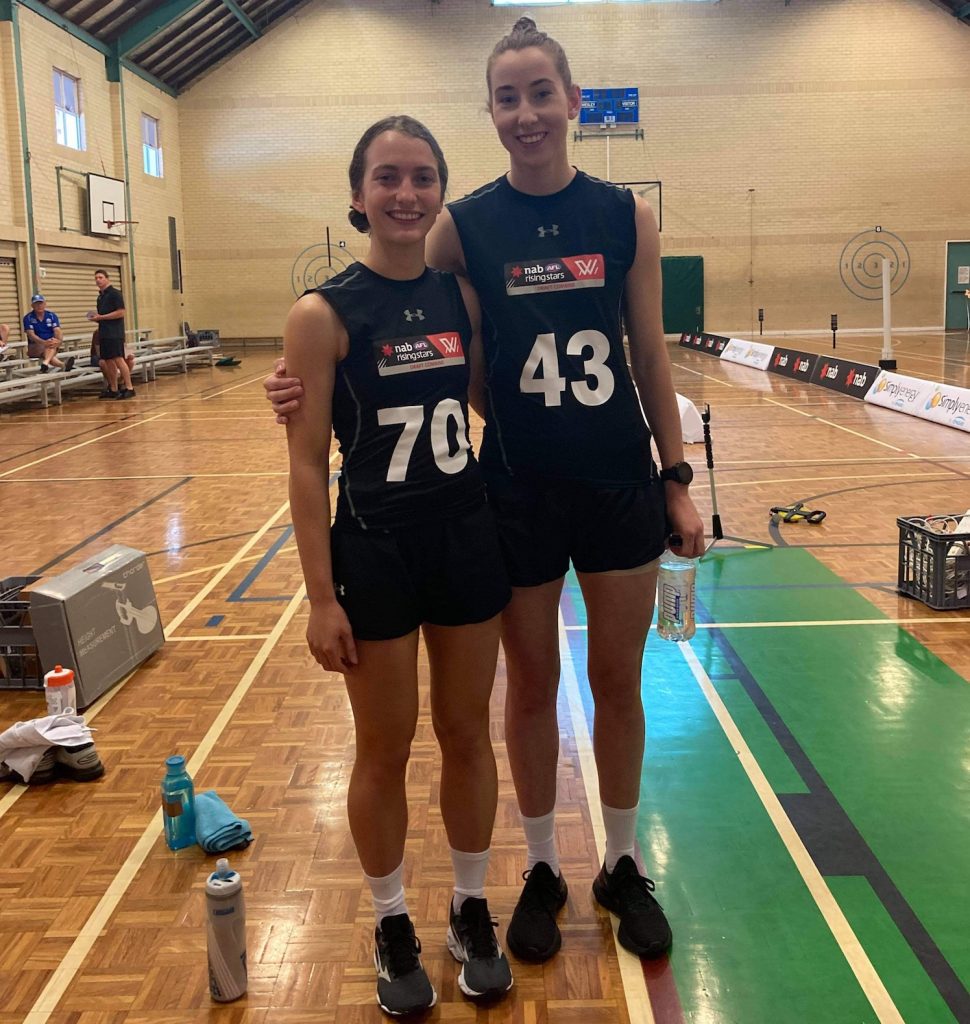 Low enjoys anywhere she is put, but playing in defence or through the midfield gives her a challenge which she loves. Interestingly enough, Low thrives on shut-down roles and along with her athleticism said the does not mind being handed a hard lockdown or tag.

“I think one of my strengths is probably my speed off the first few steps and ground balls,” she said. “In a one-on-one I can often get to a ball first, and off the half-back line I can make sure it doesn’t get out the back. “Then also just general willingness to run all day and I can keep players accountable is probably my favourite role when I get a job on someone is the shutdown job. “I think I can be an asset in that regard.”

Now it is a bit of a waiting game for Low, but she does not have to wait long with the AFL Women’s Draft only five days away. If she was to land on a list, she already has something she would love to develop.

“For my game if I was to get onto a list, I would love to really become a bit more damaging in terms of my attacking style so that comes back to making the best decision in the moment, trying to use my speed, take some grass and really trying to make other teams be wary of turning it over or just becoming good at one-on-one and becoming a damaging player,” she said.

As for what it would mean to earn that place on a list, Low was excited about the possibilities that involved working hard and seeing results, and having a real structure in place to succeed.

“From my experience with the High Performance Academy I just really like the training environment when you kind of, not revolve your life around, but you kind of have your set times and I find switching off to training is one of my favourite place to go. “I think if I got on a list this year, I could really take my football further quickly. “When you’re trying to match the best girls in the league, it forces you to be better.”