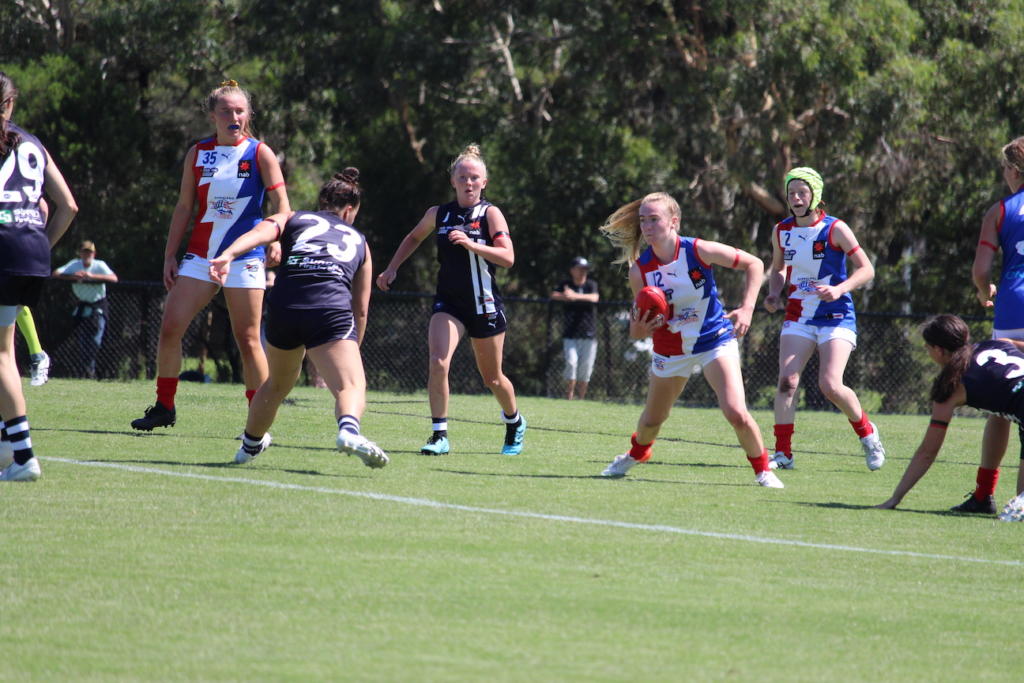 A JUNIOR star at the world’s game, Megan Fitzsimon is one of a number of talented footballers who crossed into the code after a friend referred her back to the sport in her later teenager years. In just a short time, the Gippsland Power best and fairest winner had quite the impact and played Vic Country at Under 16s level, and earned a place in the 2020 AFL Women’s National Academy.

“I probably started playing football in Auskick and then sort of progressed through to Under 11s in Bairnsdale Junior Football League with the boys,” Fitzsimon said. “I shifted to soccer for a bit. “I played a lot of soccer from Under 11s to Year 9. “Then I shifted back to football because a friend from school was also playing at Gippy Power, so she took me down for a couple of trainings and I’ve been there ever since.”

Fitzsimon noticed the difference upon returning to the code between playing local football and NAB League Girls footy.

“The girls are all better, more skilled and just the standard’s a lot higher,” Fitzsimon said. “You’ve obviously got to lift to compete with that, but that’s probably the biggest difference I’ve noticed.”

Fitzsimon said her strengths are her ability to use either side of her body by foot, making the right decision by hand and her finishing ability. The latter of those, the Power star noted had been a real focus for her and hitting the scoreboard had improved over her time with the club. As for her areas of improvement, Fitzsimon said she wants to improve her contest work in terms of her tackling and her explosiveness out of congestion.

Last year was a good year for Fitzsimon who progressed well to be adjudged Gippsland Power’s best player in the 2019 NAB League Girls season, even if the humble midfielder did not think so.

“I wasn’t really wasn’t expecting it because I didn’t probably have the year I would have liked,” Fitzsimon said. “But it was a great honour.”

A few months later, Fitzsimon ended up hearing from her Female Talent Manager, Chelsea Caple about another achievement – earning a place in the AFL Women’s National Academy.

Having reached state level with her soccer and represented the Gippsland region on a number of occasions, Fitzsimon was a relative late-comer to the game. She has hardly put a foot wrong over the past few years as she quickly earned a place in the Under 16s Vic Country team.

Fast forward a few years to 2020 and the reigning club best and fairest winner was determined to have a good year. Unfortunately for her and the Power, the season was cut off prematurely, but it has not stopped her looking at making the most out of her time away from the on-field action.

“Obviously we would have liked to play a couple more games but that is what it is,” Fitzsimon said. “I probably had my short-term goals more, just try and improve each game, each training session, trying to get the best out of myself and improve on areas I needed to a bit more. “I want to become a better player, so just those really short term goals are to try and keep me motivated throughout the year.”

“I was a bit disappointed because I feel like I had a lot more to show this year, but I think it’s been a great opportunity to develop more as a player and as a person,” Fitzsimon said. “It’s really helped me to become more flexible with moving in and out of school, but also improving my skills and my running and my strength. “It’s really helped develop my resilience as well, so it hasn’t been too bad.”

As a Richmond fanatic, Fitzsimon was lucky enough to be at the 2019 AFL Grand Final which she describes as her favourite football memory because she could see her team go on and win the flag, live. As for her favourite player, they do not wear yellow and black, but they did use to wear the same colours she did a good 15 years ago.

“I really idolise Scott Pendlebury,” Fitzsimon said. “He’s a Gippy boy obviously, but he’s got great football smarts, he’s a very skilful player and I really admire his attitude and the way he plays the game, he’s really unselfish and a team-first player.”

Now the time has come for the 2020 AFL Women’s Draft, and much like most of the past couple of years, Fitzsimon has not wanted to build up too many expectations, but said if given a chance, she would make the most of it.