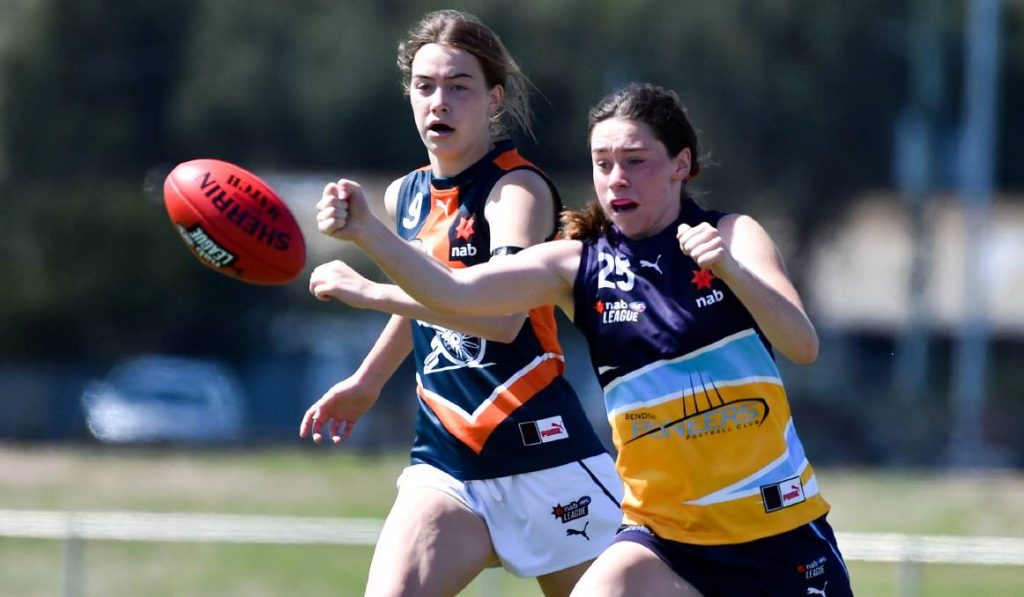 A CHANCE move into defence in the first game of the 2020 season for a quarter resulted in Bendigo Pioneers’ Jemma Finning locking down a vital spot in the back six and playing some of the best form of her NAB League career. A talented midfielder over the past couple of seasons, Finning looked a natural in defence despite having no experience there before.

Until the first game of the season I played one quarter midfield and we had a pretty big interchange, my coach asked me if I would like to have a bit of a role in the backline and I played the rest of the game in the backline and I really enjoyed I felt like there was a lot more to my position because my whole life of footy I’ve played a lot more defensive. “When I was in the forward line I played a lot more defensive. “It was a good gig and it really taught me some things about myself in footy so I guess now I’m a bit more of a defender/midfielder.”

Her move and subsequent success there was something of an opportunistic moment considering it was unplanned, but it worked out for the best and Finning enjoyed some great form prior to the season being called off.

“Yeah, before that I’d never really played in defence,” Finning said. “I’ve always been in the forward line or midfield. “I’d never trained there in defence or played there. “I might have played there in a bit of local footy for a bit of fun, not in competitive NAB League I never played defence or anything. “I thought I was a forward liner but I play a lot more defence now.”

Finning’s journey to the Pioneers started back in high school when, like many, a chance encounter saw her introduced to the sport.

“When I was in Year 7 a few of my friends were playing for the Castlemaine Under 18s girls,” Finning said. “They actually got invited to train for Pioneers, but I was like ‘oh what’s Pioneers?’, but she said I couldn’t play because I wasn’t playing local footy. “So my friends invite me to go to training to see what it’s like to play and stuff.” I went to the under 18s girls Castlemaine football training one night and I actually really enjoyed the training itself so I played a couple of games and I just wanted to keep playing because it was super enjoyable, especially with your friends and it was super fun so I decided to play.”

Her career progressed from there, but not without a setback as the team folded and Finning headed to her next closest team in Kangaroo Flat. There, she played a season and trained with the Pioneers though was unable to play a game due to her age. Instead, she went down to Melbourne to tryout with the School Sports Victoria (SSV) team.

“People are telling me I should give it a go, should be a good experience and see how I go,” Finning said. “Just to get some experience under my belt so I went to tryout for that and I ended up making the team which I was pretty surprised about as I actually hadn’t played much footy at all. “I didn’t have much experience.”

Making the team allowed her to travel to Maroochydore and then to Perth within a couple of years, the latter of which she made the All-Australian team kicking six goals in two games as a forward. Now eligible to play for the Pioneers as an Under 16s player, Finning impressed enough to squeeze into the Vic Country side which faced off at GMHBA Stadium. Unfortunately her experience was marred by a concussion in the first half of the game, but the Pioneers talent said she enjoyed the lead-up and gameday all the same.

“Yeah, it was really good,” she said. “The training was real intensive, working on plays and how we move the ball forward. “The gameday at Geelong was awesome, going into the club rooms they were about five times bigger than any club rooms I’d been in before and we all kind of got our own locker whereas the boys would have had theirs. “It was really good running out on the oval, bigger space and bigger oval to play on, a bit bigger of a crowd. “It was a lot more intensity and faster pace and it was just a really good experience to play on that type of oval.”

Injury struck in her bottom-age year and she was unable to play many games, but she had a strong middle-age season with eight matches, before playing all three this year in her top-age season. Right up until the global pandemic put a halt to the season. Nonetheless, Finning has been working on her strength over the break as a way of improving that aspect of her game. After all, she has a number of strengths that make her an impressive defender/midfielder.

Looking up to Brayden Maynard as an inspiration because of the way he plays in defence, Finning said she loves the team camaraderie that football brings, which is unlike any other sport.

The SSV All-Australian team is one of Finning’s greatest accolades, though she also has a couple of best and fairests at Kangaroo Flat as one of the younger players in the team, as well as a premiership to her name there. Now the season is done and dusted, it is all about waiting and seeing what the future might hold, starting with the AFL Women’s Draft net week.