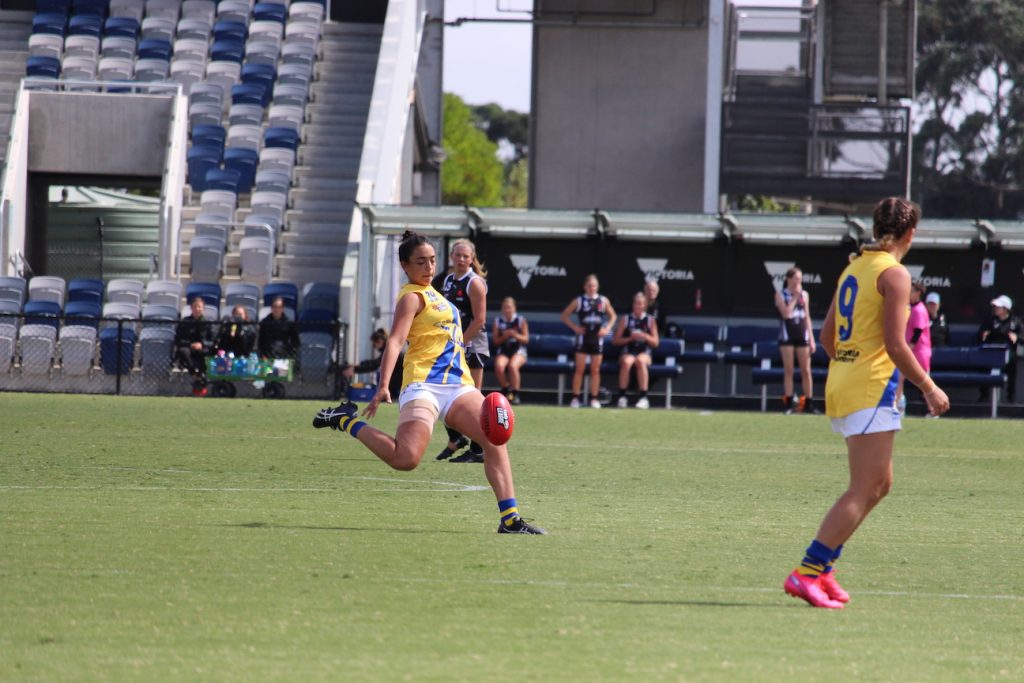 FOR many it might be a move that you want not expect to see coming. Talented basketballer Amelia Velardo had played high-level competitive basketball for up to a decade and it had been her main focus throughout her sporting career. A school captain at Overnewton Anglican Community College and juggling her Year 12 studies, it was always going to be a year of big decisions.

But one of the biggest came prior to the start of 2020 when Velardo decided to stop shooting hoops, and instead focus on kicking goals in a sport that she had not really spent a considerable amount of time in. Luckily for the Western Jets youngster, she had the support of her family in making the big switch, and it allowed her to invest herself in the new sport and everyone could see her passion for it.

“I mean, it was definitely a really big decision for me because basketball has always been my whole life,” Velardo said. “My family have always been incredibly supportive. “No matter what I wanted to do really. “When I started to bring it up, mum and dad were so supportive. “And it helped me this whole year and even just last year, kind of getting myself into the footy scene. So they’ve been amazing.”

“Like I said, they’ve supported me no matter what I wanted to do,” she said. “They could see that I was really keen on just giving it a go, and I mean, I have nothing to lose by giving it a go really. “And even after training for a few games just being in the footy environment, they could see how much I was just loving it. “So they were great supports really.”

Velardo was quite literally a Rising Star in basketball, winning that award for her club, Keilor Thunder in the Big V competition. She received a Most Valuable Player (MVP) in a grand final and she captained her side to a premiership a couple of years back in the youth league. So why the change and why football?

“I kind of lost a little bit of a spark for (basketball) and then footy started becoming more of a a prominent thing in my environment, with school sports,” Velardo said. “And I gave it a go here and there. I just loved every second of it when I was playing. “I had that fire in my gut to really pursue it. “I just I started loving it, so I thought I’m gonna give it a go and definitely have loved every bit of the transition into it.”

Standing at 176cm, Velardo was thrown into the ruck across her three games for the Jets, but often acted as a “fourth midfielder” around the stoppages, having to compete against much taller opponents. In her final game, the undersized Velardo had to go up against the 189cm Maggie Caris as the Jets went down to the Greater Western Victoria (GWV) Rebels. Velardo played her part though, racking up an equal match-high 25 disposals, as well as eight tackles, five hitouts, two inside 50s and four rebounds. Asked what it was like competing against the taller players in the ruck, Velardo said it was “definitely tough”.

I mean with the Jets list I was one of the taller ones in the group, however I wasn’t the tallest but still, amongst them,” she said. “So that’s where I kind of fit in there for the first games. “And it was definitely tough. “Coming up a few of the other girls, even in the last game, and played against Maggie Caris who had a good 20 centimetres on me. “But I also think it was really good, in a sense, having it pretty short career in footy. “I think it definitely help me to develop some more strategy.

“There were some times where I got up and I wouldn’t jump. “I just wait for it to be tapped to me, develop different strategies, more around the ball. “Like you said as an extra midfielder. “That’s the kind of the role I played. It was really tough, but I just think it was, almost a blessing in disguise to help me become more familiar with that midfield kind of role.”

Velardo finished the three games with an average of 18 disposals. five hitouts, five tackles, three inside 50s and two rebounds per game which seemingly had her take to the game with ease.

“I’ve always loved all sports,” Velardo said. “Footy’s always been some part of my life. “We’ve always been avid followers, with the AFL and I’ve always kicked in the backyard with dad and my brother, so the skill set with kicking in the hands was always kind of there for me and I kind of just developed it a little bit more. “But, I think I’ve always kind of adapted to situations that I think one of the things I really made my goal.

“My role was to, just constantly ask for feedback from coaches each quarter, each training,” she said. “So I think that’s why that constant feedback I was asking for, I was able to develop, I think faster than I thought. “And definitely with the three games, I changed a lot. It was a little bit of surprise, because it’s obviously just still getting used to it all. “I’ve always kind of been able to pick up things pretty quickly, especially when I’m asking for feedback.”

Aside from a “couple of weekends” playing Auskick when she was younger, there was a school football tournament back in Year 9 that Velardo took the opportunity to participate in. Despite not having had experience in the sport, she ended up “MVPing” the tournament. But aside from winning the award, she was presented with a gift that she would treasure over the next few years.

“The award actually came with a Sherrin,” Velardo said. “And that was kind of my first actual Sherrin footy. “I like to use that every day now. “It’s torn and wrecked now I’ve had it for that long but I think that was pretty special receiving that. “And I think aside from winning, that just the experience of that game kind of kicked off the possibility that there could be something here.”

There certainly was something there as Velardo opted to take a chance on a sport she loved from that experience, rekindling the memories from that tournament. After several advances from friends, Velardo decided to finally give football a shot and it has already proved to be a winner with the Jets talent.

Still looking to build areas of her game such as her marking, Velardo said she can take advantage of a lot of one-on-one contests in the air given her basketball background, but just needed to stick a few more grabs. As for her strengths, she rated her composure with ball-in-hand and ability to see things down the ground and assess the situation around the stoppages well.

Unfortunately her season came to a grinding halt with the NAB League Girls postponed and then cancelled due to the global pandemic. It was tough on the teenager who had finally found her calling and had her sights set on making a career out of the sport.

“It was pretty heartbreaking really,” Velardo said. “I was absolutely having time my life, and they’re playing and everything was fantastic. “But I just started really settled in and find my feet in the role. “And even in the next few weeks, my coaches were talking now going start playing more of a midfielder role. “So it was pretty shattering. “It just killed me not being able to keep going.

“I just loved it so much, so it was really, really hard when it finished. “Especially even with school not having that sport outlet. “That’s always been in my life. “It was just really hard,I just want to get back into it as soon as we can. “No matter what I’m playing. “I just really miss it.”

The only positive out of the time off has been Velardo’s ability to really focus on her Year 12 studies, having a lighter burden to juggle. It has not stopped her missing the game she loves, but has been following Carlton – the team she supports in the AFL – during the lockdown period. Her greatest inspirations include Erin Phillips – an elite talent who has taken a similar pathway to Velardo albeit later in life – and then those closest to her.

“I’d probably have to say my parents that are closest (inspiration), and that’s that’s a bit cheesy, but dad especially taught me everything, with kicking and all that,” Velardo said. “I do love all sports and I can pick up all sports pretty quickly, but he’s always the one who taught me the fundamentals of the game. “We always sit and watch Carlton on the weekend and watch them play, and he always took him to the footy when I was younger as well. “Both my mum and dad have just been massive supports and taught me to follow what I love to do and just take a chance, and just show resilience and develop all those things as well.”

As for the next step in her football career, whether it is running around at the elite level, or at a state or local level, Velardo just wants to make the most of her choice to move into the sport.

“I really just want to learn the game as best up as best I can really,” she said. I want to develop great knowledge. “And at the end of the day, just become the best footballer I can. “Obviously in the long run be really successful at a club. “Obviously everyone’s goal is to win the premiership at some stage, but my immediate goal is just to be the best player I can be really and learn as much as I can from as many different people as I can. And just enhance all different aspects of my game.”