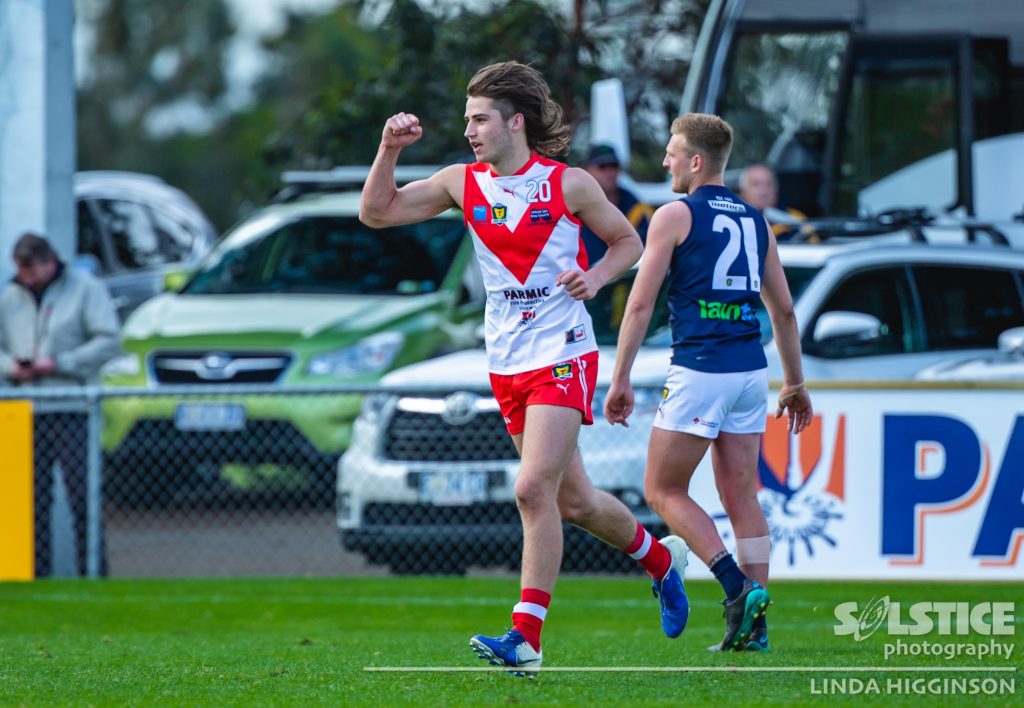 IT was a somewhat lop-sided start to Round 12 of the Tasmanian State League (TSL) competition, but finished with a thriller as the penultimate round of action was completed. In our feature game of the round we took a look at Clarence and Launceston who had a number of Devils players running around. In the other matches, Lauderdale and North Hobart both claimed wins. Meanwhile in the other match, North Launceston ended Tigers’ three-game winning streak with a comprehensive victory.

Lauderdale stormed to a dominant 10.13 (73) to 2.8 (20) win over Glenorchy, as the Bombers ran away with the game in the second half. Inaccuracy in the second term of 1.4 cost the Magpies who had one more scoring shot but trailed their opponents my nine points at the break. The visitors then piled on 6.9 to 0.1 in the second half to secure a huge 53-point win and secure third spot. Toutai Havea slotted four goals in the win, while Sam Tilley kicked two. Phillip Bellchambers and Sam Siggins were the Bombers’ best, while for the Magpies, Tom Cleary and Sam Rundle stood out with impressive performances.

Glenorchy’s second loss of the weekend was a lot closer, but they gave up a five goals to one opening term, kicking five more goals for the game as North Hobart booted nine in that time on their way to a 10.10 (70) to 10.7 (67) victory. Julian Dobosz snagged five goals for the winners in an impressive performance, while Matthew Joseph and Jaye Bowden kicked three apiece for the losers. Bowden was best-on for the Magpies in his penultimate match, while Thomas Reeves was the star for the winners alongside Hugh Williams.

North Launceston had no problems running out the game against Tigers, ending a three-game winning streak and maintaining their spot at the top of the table. They booted eight goals to two in the second half to put the Tigers to the sword after inaccuracy hurt the home team. In the end, it went the way of the reigning premiers 12.10 (82) to 3.8 (26). Taylor Whitford (two goals) was best on ground, while youngsters Baynen Lowe (two) and Sherrin Egger (two) impressed, as did Daniel Withers (three). For Tigers, Mackenzie Willis starred while William Campbell also impressed in defeat.

Trailing at three quarter time due to their inaccurate kicking Lauderdale made amends from their mistakes as they opened the floodgates in the fourth term to defeat Clarence 6.14 (50) to 4.3 (27). Throughout the match it was a relatively low scoring affair however goals from Jared Dakin, Jake Hinds, Michael Musicka, Tim Jones, Alec Wright and Dylan Riley set up the 13 point win for the visitors. While goals from Luke Swinton, Josh Green, Oliver Davis and Colby Whitelaw did all they could to give Clarence every chance of winning however, the visitors were too strong in the last term.

He set the tone early on throughout the match as he showed great aggression from the get-go laying a few hard tackles to provide a stoppage. Provided good run when he was out in space when Clarence were on the counter attack. Wherever he was it seemed the football also followed him as he got plenty of ball throughout the clash especially claiming the hard ball gets and getting the ball around the stoppages. He also got reward for his hard style of play when he kicked his first goal of the afternoon when taking a set shot. He finished with a team-high 26 disposals (15 contested), 10 tackles and five clearances, whilst also taking four marks and kicking a goal.

Despite being quiet for most of the match, he did provide a lot of good things for Clarence especially when they went forward. He had good running patterns as he tried to lead for marks and create space for himself as well as other forwards. Was pretty impressive when he was on the wing for a brief period of time taking two great marks, as he found plenty of the ball.

He had a very good second quarter where he was prolific getting the majority of the ball as his hard-nosed attitude paid dividends. Loved getting the ball through the contest as he was not afraid to get stuck in at the bottom of the contest. Wherever he was the ball seemed to follow him as throughout the match he saw plenty of the ball and provided good link up play. It was not just his centre knowledge that was impressive but also his defensive workrate was also spot on, as he defused various Launceston attacks through his intercept marking skills.

After a relatively quiet first quarter, he got better as the match wore on as he got plenty of the footy as the minutes ticked over. His intercept play was spot on during this fixture as he cut off various Launceston attacks, and even made a few booming plays to clear any Launceston threats.

Was instrumental throughout the whole game as he linked up well with his teammates as he got plenty of the ball without relatively doing anything special. Had a pretty quiet second and third terms despite being around the contest but couldn’t provide the spark Launceston needed as Clarence had momentum in the third quarter. However, he did come to life in the last term when he intercepted a Clarence a kick. In turn it gave him a set shot opportunity for Launceston to open the floodgates and he made no mistake as he nailed the kick.