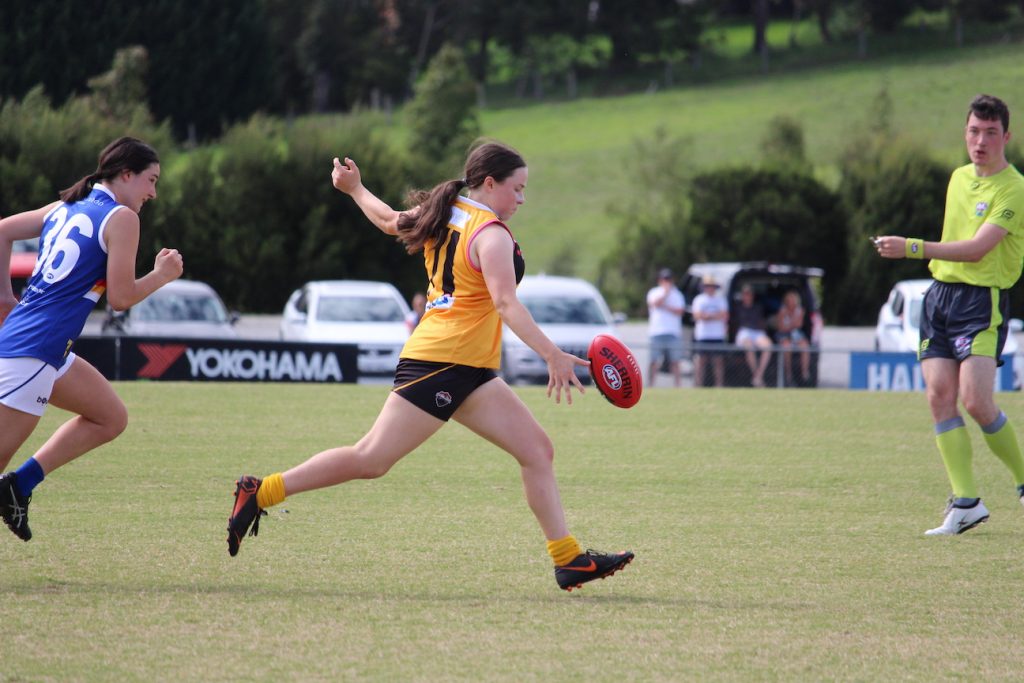 AS a talented cricketer and footballer, Dandenong Stingrays’ Jess Matin is eyeing off a way to juggle both sports into the future. Having already represented Victoria at the cricket Under 18 National Championships as recent as this year, the Stingrays small forward earned an AFL Women’s Draft Combine invite after impressing in the few NAB League Girls games this season.

“Ideally I would love to juggle both,” Matin said. “Even when I was playing local footy, it was still a big part of my life and vice versa. “You manage to split between the two sports whenever you play the other one in a way. “Ideally I would like to continue both, because … cricket’s played a big part in who I am and all that. “If I do take footy as it is, I’d still want cricket there because it’s a part of me.”

Having spent considerable time in the forward pocket for the Stingrays in 2020, Matin kicked four goals in three games and looked lively in her first proper season at NAB League level. That is not to say she had not come form a successful footballing background, winning five premierships with Beaconsfield, as well as three best and fairests in a side that featured current AFL Women’s talents Tyla Hanks and Georgia Gee, as well as Vic Country’s top prospect this year, Tyanna Smith.

“I’ve always played footy, that has never changed,” Matin said. “I’ve played since I was under 9s with the youngest age group, I’ve played my whole life. “Then I started playing cricket afterwards and that took up a lot of time because I made the under-age Vic squads. “Then with the footy I put it off I guess because I would have cricket in the winter and the summer, and the footy went for a little bit of the summer. “I guess I didn’t feel I could the manage the load for both all-year round so I didn’t pursue the Rays’ stuff.”

That changed as she soon changed as Matin decided to give Australian rules a crack at trying to get to the elite level, enjoying the toughness and fast-past nature of the sport. She was also overwhelmed with the support from her Stingrays’ teammates as she entered the program as a top-ager.

“Yeah it was good,” Matin said. “I only knew like a couple of people so I had to get to know people and they were really welcoming all the top-agers and all the girls. “They were really supportive and all welcoming. “They made me feel like I belonged.”

While Matin played small forward for the Stingrays, she ran through the midfield with the Eagles, citing her ability to read the game quickly, and use the ball well when in possession among her strengths. Having had her only NAB League Girls season cut short, Matin still used the time to work on other areas of her game.

“During this break I’ve worked on my fitness because I knew it was one of my weaknesses,” Matin said. “Not having the running ability I probably should have, so trying to improve that and become a little fitter than I was.”

Aspiring to be an elite sportsperson, Matin said entering 2020 she did not have any particular aims with her football, but wanted to excel however far she got.

“At the start of the year I didn’t really have any expectations on what I just kind of just joined it because it’s a good opportunity for me and to take the next step with my footy and I guess I never really thought of specific goals per se,” Matin said. “Just take every opportunity and be the best I can be in every situation that presents to me in the future.”

While many have been left in limbo over the season’s cancellation, Matin said the season cancellation allowed her to refocus and take a break, which is something she has seldom had over the years as a dual-sport players.

“Yeah it was kind of a weird feeling because I’m normally busy all year around doing one sport,” Matin said. “Then that got cancelled and the preseason hadn’t started yet and it’s been relaxing because I’ve had a mental refresh because I haven’t had to have my brain on during training and all that. “

So it’s kind of good on the mental front and then just over the break, you know just improving my running and improving my strength and doing anything I can to stay fit, to stay active because that’s the worst thing you can do in a break like this. “Just kind of sit around all day and not get your blood circulating and that.”

Looking back on her football career, Matin was able to pinpoint one particular moment amongst the rest that stood out, and it featured a Stingrays’ teammate at local level.

“I’ve had a few good ones (memories), we’ve been pretty successful as a local team,” Matin said. “We’ve won many flags like that. “One flag a couple of years ago, can’t remember which one. “What Tyanna Smith did, she kicked a goal just before the siren just by the buzzer which was a pretty good feeling because we were up and then they came back and it was just hard-fought from there so just to sneak over the line was such a good feeling.”

Having won the multiple premierships and best and fairests, as well as a few player of the series for different cricket competitions, and being the leading wicket-taker at the Under 15 National Championships for Victoria, it is easy enough to see Matin pulling on the whites as easily as the footy boots. If all goes to plan in the future for the talented teenager, she could be the next Jess Duffin.