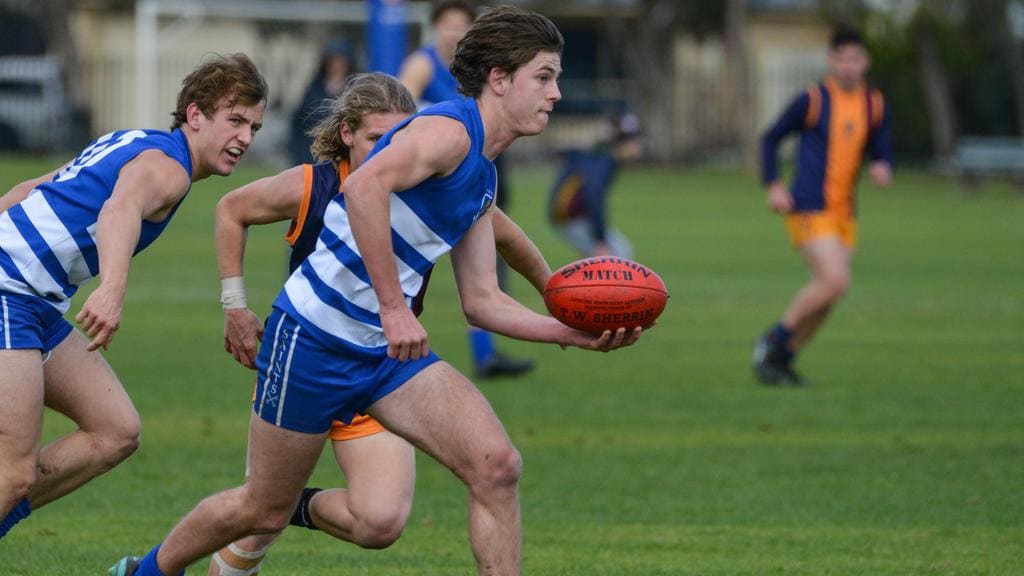 THE TOP junior prospects from South Australia rolled on into Round 14 of the SANFL Under 18s competition, with a number of standouts continuing to emerge. In this edition of Caught the Eye, we have again compiled a list of the best and most promising performers from across the weekend, with one representative from all eight SANFL clubs. For extended profiles on each AFL Academy member and National Combine invitee listed, click on their names highlighted in red. For our full weekend scouting notes, click here.

Our scouts said: “Poulter proved once again that he is a class above Under 18s level… in this game, he always followed up his possessions and attacked the ball with ferocity. He frequently pushed back to help the defence and provided a strong marking target when required. Although he made a couple of skill errors early, he cleaned this up as the game wore on. Poulter kicked two majors for the day, including a goal of the year contender in second term.” – Tom Cheesman

Verdict: Having completed a solid school football campaign and a stint in the Reserves, Poulter looks primed to make an impact during the Under 18s finals series. The tall midfielder showed off all of his athletic prowess during Wednesday’s South Australian combine, and continues to thrive on-field. His consistency has been remarkable this year, putting him within reach of a potential first round draft shout. 190cm, goalkicking midfielders who can mark and run well are in vogue at the moment, making Poulter a highly-fancied prospect among this year’s pool.

Our scouts said: “McDonald was the Bulldogs’ best player on the day. He is a hard-working midfielder who reads stoppages well and finds plenty of the ball around the ground. His tackling was fantastic, as he never let players run past him and won free kicks for holding the ball. McDonald won many loose balls because he simply attacked it harder than his opposition, and he also has great vision and composure under pressure.” – Tom Cheesman

Verdict: The 16-year-old capped off a remarkable Under 18s season on Saturday with one of his best performances to date. He was again Centrals’ most prolific ball winner, something which has come so naturally despite his age, size, and the fact that the Bulldogs only won four games this year. McDonald looms as one of South Australia’s top midfield prospects for the 2022 draft, but there remains plenty of room for improvement and a long way to go, yet. Such consistency does not go unnoticed, though.

Our scouts said: “Another talented bottom-ager to impress for the Bloods was midfielder, Kennedy, who once again showed why he is one of South Australia’s leading small midfield prospects for next season. Kennedy gave it his all at each contest, cracking in hard against some of Norwood’s strong-bodied on-ballers. Although his work in-tight was the highlight, Kennedy was also able to impact the play away from the stoppages. He tackled hard as always and was rewarded with a holding the ball free kick early in the first term.” – Tom Wyman

Verdict: Kennedy is another player who has managed to shine among a side which has lost most of its games, with his work-rate and tenacity ensuring he has an impact on each contest. He was up against it on Saturday given the depth of Norwood’s midfield, but constantly gets his hands on the ball and wills himself out of congestion with pace, while also getting his hands dirty with defensive acts. Should he hit the 180cm mark as a top-ager and truly take over the Bloods’ midfield, it will go a long way to putting Kennedy within draft contention in 2021.

Our scouts said: “Saunders was the clear best-on-ground in Norwood’s comprehensive triumph. He started in the middle and impressed with his breakaway pace. Although his foot skills have been questioned by some throughout the course of the season, his kicking was precise for much of the contest against West Adelaide. His tackling pressure remained high for the entirety of the contest and Saunders was able to break the game open with his burst running and intensity around the ball. He used his strength well one-on-one while up forward and harassed the ball carrier relentlessly, but his impact on the scoreboard was what separated his game from the rest.”  – Tom Wyman

Verdict: Saunders’ senior experience has clearly done his confidence and form a world of good, taking his game to another level as he dropped back down into the Under 18s setup. The hard-running midfielder put on a show for Norwood and will likely make them a finals force in the coming weeks, with some terrific class on the inside allowing him to run the show on the outer. As are scouts suggested, Saunders did it all, but it was his five goals which truly set his game apart. He would have been a smoky for South Australia’s state squad, and is a reliable player with good qualities at SANFL level.

Our scouts said: “The Crows NGA product was electrifying in the first quarter, having four shots on goal in the early stages of the game and kicking two of them. His pressure and efforts without the ball stood out all game, with a big chase down tackle in the middle of the ground exemplifying that. He looked dangerous moving up the ground and in the middle with his pace and core strength, managing five clearances during his time in the midfield. He could have been a little wiser at times to not blaze away around goals kicking a couple out on the full, but his efforts are nonetheless exciting.” – Eli Duxson

Verdict: Newchurch’s first term is exactly what would have Crows fans most excited about nabbing their NGA talent come draft time. The small forward set the game alight, producing a raft of scoring opportunities for both himself and his teammates. At his best, that’s the kind of freakish, game-winning quality Newchurch provides. It was pleasing to see him put in a more consistent performance, with some midfield time also allowing him to show off a different side to his game. He remains one of the better small forward options in this year’s pool, but his ties to Adelaide should stave off would-be bidders in the top 30.

Our scouts said: “Undoubtedly a best on ground performance for the hard-working midfielder… Roberts was active at stoppages but spread well to find space often, finding a lot of ball between the arcs during slow play from the Panthers. His preferred left boot looked as clean as it gets, although he did look reluctant to go on his right side on one occasion. He normally had enough time and space to steady on his left though. Roberts’ poise going inside 50 was classy, but he was also very effective being on the receiving end from forward entries. A great game for him as he will look to carry that play into finals.” – Eli Duxson

Verdict: Roberts is another player set for a huge finals series, with the Panthers bottom-ager already a potential top 10 prospect for next year’s draft. He simply works harder than most others, accumulating the ball at will while holding a great presence around the ball, and being able to find the goals from range. He has a good balance of class and grunt, with his no-fuss style, red hair, and shared initials among the other traits which help draw comparisons to Matt Rowell. He may not reach the exact same heights, but Roberts is a dependable player who has picked up from where he left off after completing his school football duties.

Our scouts said: “While the lively wingman looked a little proppy on a couple of occasions, he still managed to have an impact and put his leg speed to good use. Wanganeen’s ability to close while chasing and apply manic defensive pressure is undoubtedly one of his key strengths, though he could not quite utilise that same factor going the other way. The bottom-ager tracked back well in the early stages, but found more ball forward of centre in the second half with much of the sting sapped from the contest.” – Michael Alvaro

Verdict: The stats hardly did justice to Wanganeen’s game on the weekend, as one of Glenelg’s more impactful players. His closing speed was a particular highlight despite only registering three tackles, and it was great to see him hold a consistent endeavour throughout the contest despite Sturt getting well on top. The bottom-ager is usually most damaging going forward with his speed and raw talent, so look forward to catching more of that as he moves into his top-age campaign next year.

Our scouts said: “It is not hard to see why Carruthers earned a national combine invite, as the sharp-kicking defender proved a class above with his use by foot in what was otherwise a turnover-heavy contest. The top-ager broke the game open with his ability to hit targets in the corridor, putting Sturt in the best possible position to attack. His pin-point delivery to runners allowed them to continue in their stride, opening up the stale, short-kicking trend of the game. As somewhat of a loose outlet, Carruthers was also able to generate some run through the corridor himself via handball receives, while dropping back into defensive 50 as a relieving option. Another string to his bow is intercept marking, with some nice floating grabs making for a complete highlight package.” – Michael Alvaro

Verdict: One who has somewhat flown under the radar is Carruthers, who has hardly missed a beat since returning from school football duties with St Peter’s. Having returned to the SANFL fold with Sturt, the top-ager has sent a reminder of his draftable talent with some outstanding form. It was no different on Saturday, with his game-high disposals and marks tallies backing up his perceived impact. Not only can Carruthers break the game open by hitting attacking options via foot, but he also has the work-rate to chain his possessions or provide a safe outlet deep in defence. His pacy runs through the corridor also catch the eye, with intercept marking yet another highly desirable trait for the half-back. There’s plenty to like about what Carruthers presents, and a big finals series should further consolidate his draft stocks.